“Where you are is home…”

At age fourteen, Zelda Rossi witnessed the unthinkable, and has spent the last ten years hardening her heart against the guilt and grief. She channels her pain into her art: a dystopian graphic novel where vigilantes travel back in time to stop heinous crimes—like child abduction—before they happen. Zelda pitches her graphic novel to several big-time comic book publishers in New York City, only to have her hopes crash and burn. Circumstances leave her stranded in an unfamiliar city, and in an embarrassing moment of weakness, she meets a guarded young man with a past he’d do anything to change…

Beckett Copeland spent two years in prison for armed robbery, and is now struggling to keep his head above water. A bike messenger by day, he speeds around New York City, riding fast and hard but going nowhere, his criminal record holding him back almost as much as the guilt of his crime.

Zelda and Beckett form a grudging alliance of survival, and in between their stubborn clash of wills, they slowly begin to provide each other with the warmth of forgiveness, healing, and maybe even love. But when Zelda and Beckett come face to face with their pasts, they must choose to hold on to the guilt and regret that bind them, or let go and open their hearts for a shot at happiness.

The Butterfly Project is a novel that reveals the power of forgiveness, and how even the smallest decisions of the heart can—like the flutter of a butterfly’s wings—create currents that strengthen into gale winds, altering the course of a life forever.

I tried three times to write this review. I was always erasing and changing trying to make it better. Until I realized it did not have to be perfect. Like the heroes my review will have flaws because I could never compare to Emma Scott’s writing.

I will follow a beloved author’s advice: write like no one will ever read you. That way you’ll be true to yourself.

First of all I loved the book.

Reading The Butterfly Project was like watching the movie Love Actually: deeply moving, in technicolor with faultless cast.

Emma Scott has used many common romance tropes: two lost people who will help each other after a random but fateful encounter. Life has taken its toll on them. They’re broken and riddled with guilt.  It’s filled with romantic moments and good feelings. It could have been too cheesy and eye roll inducing but Emma Scott never fell in the trap of overdoing it. On the contrary it was beautiful, moving, inspiring … just right.

That’s the trademark of a very gifted author and I would die to meet her as I bet the woman must be an incredible lady as well.

She just ripped my heart and I still want to thank her.

I loved her writing. I was IN the moment, walking in the character’s shoes. I was not reading about Zelda or Beckett. I was them.

I was overcome by the Christmas tree beauty on Time Square. I was warmed all over, trapped in a bubble of happiness while swaying gently on Sinatra’s song. I could not breathe when I had to go home because it reminded me of my shortcomings. What I didn’t do to save her. I was living time and again that frozen moment when my actions caused death. I was elsewhere, not on the train commuting to work, not on my sofa not… but somewhere in a dingy studio in Brooklyn, sleeping on an air mattress. 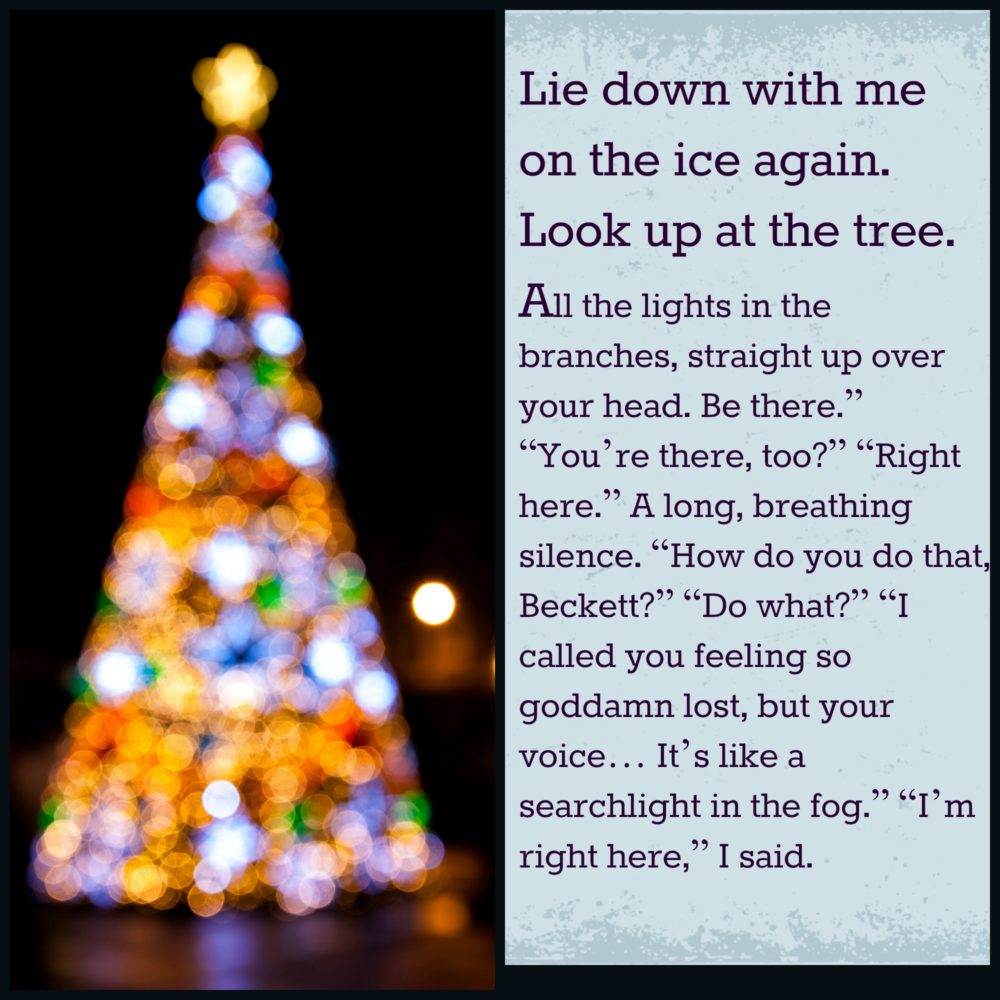 Characters are a crucial element in a book. I have to be able to connect with them, to understand their motives, their flaws, their strengths and weaknesses. The Butterfly Project has an incredible set of characters main and side characters. Beckett is the ex con you would never expect. He was selfless, good at heart, courageous, supportive. He reminded me not to judge people on their actions. Mistakes happen you can stumble along the path. Some bad action does not make you evil. Everyone has a right to forgiveness and second chance.

Forgiveness takes center stage in this story: forgive yourself and forgive others. That’s the only way to be free and go on.

Zelda was a very endearing and relatable heroine. I loved her as graphic artist. This is the third book revolving around artists and I love Emma Scott to pieces for choosing to put the spotlight on artists. I love drawing and creating in general and I know how hard it is to live from its craft. What Zelda did to pursue her dream was very brave. It was also vital for her to publish her story as it was a tribute to a loved one.

Zelda and Becket had nearly nothing. They worked two jobs and lived in a tiny freezing studio and yet they never had been happier. They were not alone anymore. They were alike, supporting each other.  Because what’s most important in life is not wealth or possessions but  love. 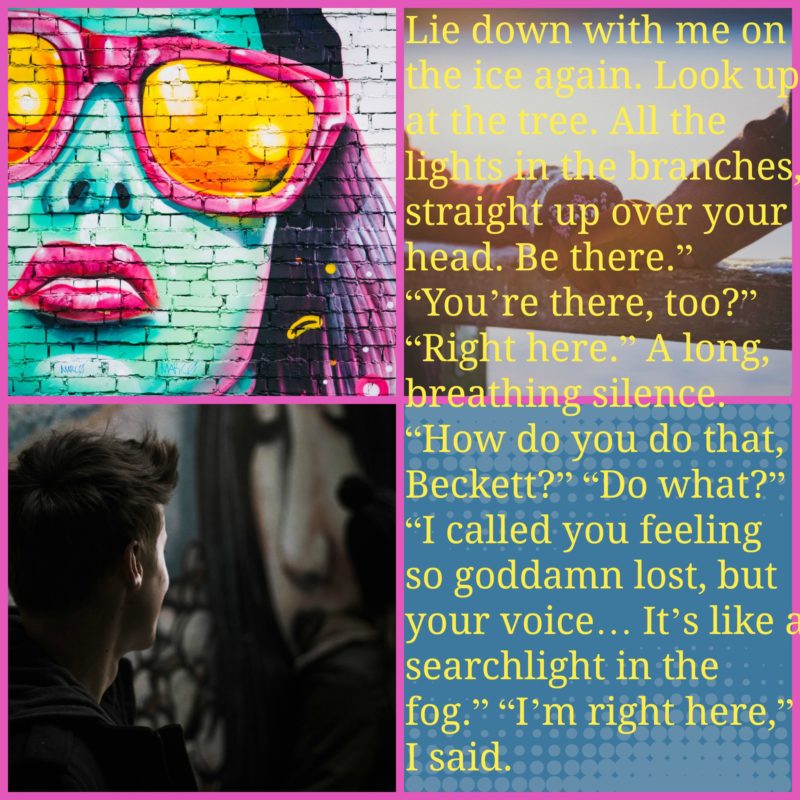 So it’s been a “feel good “ book written with great talent and a true heart.  I can’t recommend it enough.

Some of my favorite quotes:

“Lie down with me on the ice again. Look up at the tree. All the lights in the branches, straight up over your head. Be there.” “You’re there, too?” “Right here.” A long, breathing silence. “How do you do that, Beckett?” “Do what?” “I called you feeling so goddamn lost, but your voice… It’s like a searchlight in the fog.” “I’m right here,” I said. “

“I wear the words like chains around my neck. Felon. Criminal. Prisoner. I‘m all those things, and remain them, even after time served. A freed prisoner with a life sentence. Now I have a woman in my life who’s turned everything that was cold and gray into warmth and color. She’s inked new words onto my heart. Us. Together.”

“Do you ever wonder, Zelda, if you’re allowed to be happy?” Tears sprang to my eyes. “Yes,” I whispered. “All the time. Every minute.”

“Forgiveness. The word was a whisper in my mind. If I were drawing it on the page, it would be written in small letters but contained in a large thought bubble. Eleven tiny letters floating in a sea of white. Like a balloon. A red balloon and a child’s smile… “