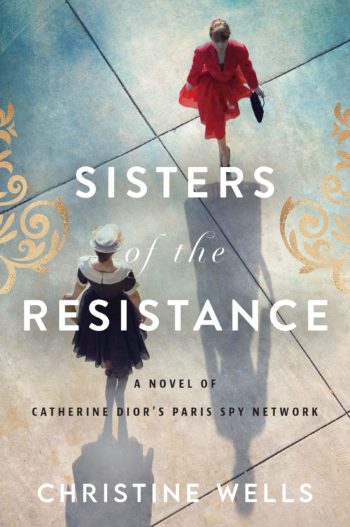 Set in the thick of the Paris Resistance movement during WWII, this exciting novel tells of the deep involvement of Catherine Dior and two young women who risked their lives to support her efforts—perfect for fans of Kate Quinn and Jennifer Chiaverini.

France, 1944: The Nazis still occupy Paris, and twenty-five-year-old Gabby Foucher hates these enemies, though, as the concierge of ten rue Royale, she makes it a point to avoid trouble, unlike her sister Yvette. Until she, like her sister, is recruited into the Resistance by Catherine Dior—sister of the fashion designer, Christian Dior.

Gabby and Yvette are both swept into the world of spies, fugitives, and Resistance workers, and it doesn’t take long for the sisters to realize that their lives are in danger.

Gabby discovers an elderly tenant is hiding a wounded British fugitive, and Yvette becomes a messenger for the Resistance. But as Gabby begins to fall in love with her patient and Yvette’s impulsiveness lead her into intrigue at an ever-higher level, both women will discover that their hearts and even their souls hang in the balance as well.

This page-turning novel is perfect for any reader fascinated by the role of women during World War II, whose stories are often untold, and introduces us to Catherine Dior, the fearless real-life Resistance hero.

When the synopsis is selling it “for fans of Kate Quinn” I swear it does not lie.

I listened to that story in the span of one weekend. I didn’t want to stop. And Katia Maarleveld’s voice is perfect for that story, like every WWII story she has narrated so far!

This has all the ingredients to become a movie: the sophistication of haute couture with Christian Dior, the historical background of WWII and an occupied Paris with the tension of working for the resistance. Add a dash of budding romances with a wounded British soldier or a mysterious Swedish ambassador and you have THE magic formula for success.

Written between past 1944 and “present” 1947, we follow every sister alternating between POV. This in itself is a high feat because you have not only the switch past/present but the switch between voices! And it’s flawless, unfolding effortlessly.

In the beginning we follow Yvette, the most impulsive and daring of the two sisters. She is back in Paris as a witness for the trial of Mademoiselle Dulac, famous actress who slept with a Nazi general.

Right away we see that it’s difficult for Yvette to be back in Paris. A town she left in a hurry after what we guess were dramatic events. In two year she has never written back to her sister Gaby.

He has his first show and we guess that she used to work for him somehow. As a courier for the Maison Lelong where Christian Dior worked.

Gaby will attend the show, thanks to Catherine Dior, Christian’s sister and will realize that Yvette is back without her knowing.

Shocked she goes back to her apartment 10 rue Royale where she is concierge as her mother is still weak. When did Yvette come back?

War memories are rushing back, with all that Gaby had to do and of whom she has lost.

The tone was set and I was hooked line and sinker.

I loved reading about the Parisian fashion, how it still was important during the war. How with a scarf these women added that extra something to make them elegant.

I loved following Yvette when she cycled through Paris delivering messages and helping the resistance. She was so courageous. She wanted to make a difference. She had to help! Even if that meant crossing path with collaborators. Gestapists.

But then there was also the handsome and enigmatic Vidar.

Vidar who worked for the Swedish ambassy and seemed to know everything about Yvette’s whereabouts. Vidar who was seen helping the Nazis. Vidar, friend or foe?

And I loved seeing Gaby taking care of all her tenants of rue Royale. From frail madame Laroque to charismatic Catherine Dior.

Gaby wanted to keep her head down, to wait for the liberation. Yet she will help the resistance too. And she was afraid. Always afraid of the danger she put her family in if she was discovered.

I was totally absorbed in Gaby and Yvette’s lives and walked in their shoes all along. Trembling with them, frightened but hopeful too.

This was a compelling and captivating story of courage with excellent characters and a fascinating historical background. A favorite of my 2021 reads!