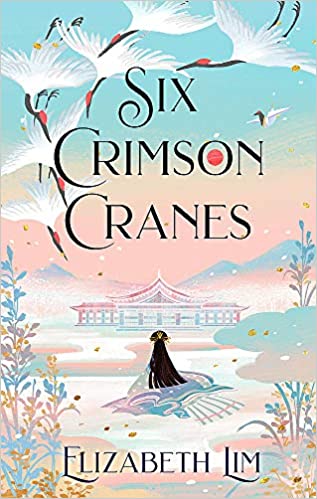 Shiori, the only princess of Kiata, has a secret. Forbidden magic runs through her veins. Normally she conceals it well, but on the morning of her betrothal ceremony, Shiori loses control. At first, her mistake seems like a stroke of luck, forestalling the wedding she never wanted, but it also catches the attention of Raikama, her stepmother.Raikama has dark magic of her own, and she banishes the young princess, turning her brothers into cranes, and warning Shiori that she must speak of it to no one: for with every word that escapes her lips, one of her brothers will die.

Penniless, voiceless, and alone, Shiori searches for her brothers, and, on her journey, uncovers a conspiracy to overtake the throne—a conspiracy more twisted and deceitful, more cunning and complex, than even Raikama’s betrayal. Only Shiori can set the kingdom to rights, but to do so she must place her trust in the very boy she fought so hard not to marry. And she must embrace the magic she’s been taught all her life to contain—no matter what it costs her.

This was another buddy read with @cjrtb_books and this time, I beat her to the finishing line as I flew through that book! 😊

I have read and love the Spin the dawn series and already knew that Elizabeth Lim’s writing worked perfectly for me. But in the beginning, we had some interesting chat as Caro found that the tone was “young”. I argued that Shiori was only sixteen years old and has been a pampered princess so of course she would sound young!

But one thing we both agreed was her incredible character growth!

What is Six Crimson Cranes?

This is a retelling of The Wild Swans tale centered around Shiori, a headstrong young princess who will discover she has magic in a country where magic is forbidden!

She will uncover some terrible truth about her stepmother who will lead the stepmother to curse Shiori and her six brothers.

Now all brothers changed into cranes on the day and becoming men at night, they’ll flee the imperial palace in search of Shiori.

She has indeed vanished without a trace, enchanted by her stepmother and condemned to never speak again. Speaking would mean her brother’s death! Shiori is also unrecognizable as she wears an enchanted bowl on her head, covering her head and eyes.

The whole plot will be trying to reunite with her brothers and breaking their curse. She will be helped with magical allies like a young handsome dragon and a paper crane!

Of course, to succeed, Shiori will have to face many ordeals, working as a servant, weaving a magical net made of burning material… All ordeals and tasks to fulfill you find in every good fairytale!

At the beginning of the story, Shiori was brash, mischievous, self-centered and had no real care. Spoiled but with a good heart, she was easy to love and I was ready to overlook her flaws like I would from a naughty but sweet child.

At the end of the story, she is so far from the spoiled princess who flirted shamelessly with boys, thought only to eat and had no remorse to ignore the countless letters her intended sent her. Shiori will be more mature, selfless and ready to sacrifice her life for others. It was an incredible character growth.

I really liked to be back in that magical universe filled with enchanters and demons. Shiori’s magic created Kiki, a paper crane that got part of Shiori’s soul. She reminded me of Jiminy Cricket in Pinocchio, the voice of reasons. Kiki was a little grumpy too.

The budding romance, might be a love triangle but that remains to be seen. As it is, it was  very well done and surprising!

Give me the sequel already!