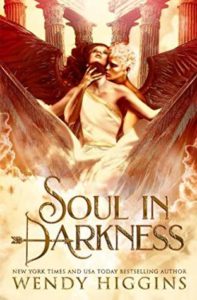 People travel from afar to the small isle in the Aegean Sea hoping for a single glimpse of Princess Psyche. Their adoration for the mortal woman is so all-consuming that citizens begin to shower her with the very gifts and offerings they once left at the alter of Venus, goddess of love and beauty. But gods are known for their jealousy.

Cupid, the god of love, takes pleasure in causing strife and mischief in the lives of humans. He uses love as a weapon, humoring in the weakness of people at the whims of their feelings. When his mother Venus approaches him about punishing the human girl who dares to steal her offerings and affections from the people, Cupid gladly accepts.

Psyche’s punishment is to be given to a mysterious creature who only comes to her in the dark of night under the pact that she will never lay eyes on him. She is terrified of this stranger, who the oracle described as a serpent. Her mate, however, is masterful in his dealings with his bride. He takes his time, morphing her fears into different sensations completely.

Based on the Roman/Greek mythology of Cupid and Psyche by Lucius Apuleius, New York Times bestseller Wendy Higgins brings the tale to life, weaving layers that show exactly how a sacrificial lamb can be enchanted by an unseen monster.

I ordered Soul in Darkness after having read Raven (@dreamyaddiction)’s review. We have similar tastes in book and I will meet Wendy Higgins at a book event in a few weeks. What better reason to make a dent in my book budget right?

I am not a huge fan of mythology and did not know the story of Cupid and Psyche.

From the synopsis and Raven’s review I got that Psyche was incredibly beautiful and that her beauty earned her people’s love. She got offerings like a goddess and that soon angered Venus!

Even I know never to anger a god or a goddess for fear of their wrath!

Happened what would happen: Venus’s revenge.

Psyche’s punishment was to be married to a monster, only coming to her at night.

Honestly should have I been in Psysche’s shoes I would have reacted in a totally different way!

Psyche is gorgeous but the offering and worship of her people feel wrong to her (would have I resisted the trinkets and baubles????).

She does not think she deserves them. Only the gods should be revered, not her! See! She is not vain while I would maybe have pranced and basked in people’s admiration LOL

She is also disheartened as men don’t seem to pay attention to her mind or seem interested in her conversation. They become a blubbering mess, dazzled by her beauty. Mesmerized and unable of intelligent and stimulating conversation.

This shows that Psyche was at odd with her time when women were asked to be pretty and that’s it!

Psyche wanted more. She did not want to be admired for her beauty. She wanted someone to talk to. In this she was a modern woman!

When she will hear of her fate, she will accept it. Because she recognizes that her parents and her people wronged the gods. She had always told people she should not be idolized!

“The gods have spoken. Hers will be a funeral wedding to a dark-deeded winged serpent. Many call him a monster. Your dear Psyche will call him Husband.”

That’s the difference between Psyche’s soul and my soul I guess. Hers shone bright.

That’s no wonder her husband will try to earn her trust and affection!

I really had a good time reading this novel.

Psyche was a bright soul, a kind person and a solar personality. She was brave too as she had to face more than her monster of a husband and did it chin high!

I loved reading about jealous goddesses and tricks played on humans. Yet I wondered why they were revered and worshipped when they did not set example! Jealousy and pettiness wasn’t uncommon. These are not attractive traits to me and I would again probably not have made offerings to these volatile beings!

Lucky for me I was not born at Psyche’s time as I would have been cursed many times by the gods!

I also loved the topic of true beauty being your inner beauty. Psyche will have to learn to trust and feel affection for her husband without seeing nor touching him. And he will have to earn her love without the usual tricks used in seduction: beauty, smooth voice etc.

Psyche will have a hard time not knowing If she should trust her mind or her instincts. They will be at war faced with her husband’s kindness, consideration and his masterful dealing (imagine all that you want you are right 😉 )of his wife.

It was a very enjoyable tale of true beauty, courage, kindness and love. And it also made me realize that Venus would be the mother in law from hell! I so much prefer my own mother in law!

Do you love reading about mythology? Have you read other Wendy Higgins books?