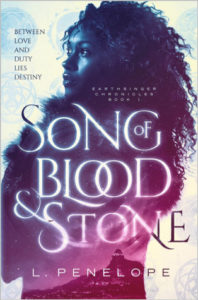 A treacherous, thrilling, epic fantasy about an outcast drawn into a war between two powerful rulers. Orphaned and alone, Jasminda lives in a land where cold whispers of invasion and war linger on the wind. Jasminda herself is an outcast in her homeland of Elsira, where her gift of Earthsong is feared. When ruthless soldiers seek refuge in her isolated cabin, they bring with them a captive–an injured spy who threatens to steal her heart.

Jack’s mission behind enemy lines to prove that the Mantle between Elsira and Lagamiri is about to fall nearly cost him his life, but he is saved by the healing Song of a mysterious young woman. Now he must do whatever it takes to save Elsira and it’s people from the True Father and he needs Jasminda’s Earthsong to do it. They escape their ruthless captors and together they embark on a perilous journey to save Elsira and to uncover the secrets of The Queen Who Sleeps.

Thrust into a hostile society, Jasminda and Jack must rely on one another even as secrets jeopardize their bond. As an ancient evil gains power, Jasminda races to unlock a mystery that promises salvation.

The fates of two nations hang in the balance as Jasminda and Jack must choose between love and duty to fulfill their destinies and end the war.

The publisher gave me an ARC of this story via Netgalley.com  but it has no influence on my honest review

4 “I needed some time to fall into it” stars

Heroine: ***** stars (had nearly no power but dignity and morale strength in spades)

Heat: *** (this is NOT a YA as you have sex but it’s not overtly spicy either)

World building: **/2 (I wanted more. It wasn’t detailed and yet we had legends explaining the past)

Ending: *** (I had what I wanted but it seemed a little rushed by the end)

Honestly it took some time to fall into the story. I thought it would be another 3 stars or worse a DNF. The main reason I think was the lack of world building and I was somewhat puzzled, not really feeling Jasminda her past or her problems.

Progressively the story and the world became solid, real. What I really, really, really loved above all else was the author’s gift to make us feel what being a Lagamiri in a world of Elsiran meant.

Jasminda had a skin with a different color than her neighbors.

She could not hide her heritage. People knew right from the start that she had magic. Or rather that she could Sing. Sing in this world meant you had a Song creating magic. Some were healers or grew plants and could move earth. Others mastered winds and storms. Others….

For centuries a war is raging between the Silent (without song or power) Elsiran and the Songbearers Lagamiri. Their countries are separated by a magic wall preventing the True Father, sovereign of the Lagamiri, to invade Elsira.

Jasmine was born from an Elsiran mother working in the Sisterhood *women sworn to The Queen Who Sleeps and helping refugees among the Lagamiri * and a Lagamiri father a soldier trapped in Elsira when the wall was restored the last time.

She grew up in a loving family with her brothers and parents but they all disappeared years before leaving Jasminda alone on her little isolated farm.

I really admire how the author made me feel the contempt other people had for Jasminda. She is going through what many people from mixed origins go through every day if they leave among closed minded people. The mistrust, the fear as she could master some magic, the contempt as she was a grol witch… she was constantly shunned and rejected. Isolated.

Jasminda could have been bitter and resentful yet she was everything but.

“When you said you’d find lodging for me, I didn’t think . . . Jack, I can’t sleep in the palace.” “Why ever not?” He crossed his arms and leaned against the truck. “Because I’m a goat farmer. Palaces are for royalty. The Prince Regent cannot possibly allow someone like me here.”

She walked chin high even if she trembled inside.

That’s true courage. Doing things you are afraid of doing but giving it a go nevertheless.

When she meets Jack he is nearly dying. He is part of the Elsiran army and he’s been hunted by Lagamiri soldiers. She will try to heal him even if her power is weak. She will heal him endangering herself and soon she’ll be in a very precarious condition.

Jack will convince Jasminda to help him save Elsiran from the True Father’s clutches. From that moment on they’ll embark on a journey filled with ordeals, magic, defeats, doubts and fights.

If I really loved Jasminda, Jack had me climbing the walls sometimes! He had secrets and he should have told them to Jasminda way sooner. This was his first mistake. His second mistake was being hush hush about their connection. For someone who’s been seen less than Elsiran all her life, who had to face rejection and insults Jasminda was really hurt by Jack’s choice.

I wanted to shake some sense in him! He had many admirable qualities as he was kind, generous, courageous but could he make bad decisions sometimes! It infuriated me.

I also loved the author’s choice to have a nearly powerless heroine. Jasminda had very little power compared with other Lagamiri and she often doubted her actions. She was desperate not to be able to do more. Yet she was always ready to endanger herself to help others. It was a refreshing choice from all the perfect heroines I usually read about and adore.

I also appreciated the contemporary topics the author chose to broach aside racism. The refugees come into Elsira hoping for a better fate just to be contained into camps …. Despised by mistrusting Elsiran, seen as less, why should the citizens share their food and riches with these savages? Does it ring a bell? It was really accurate and reminded me of our current problems with refugees coming from Syria in Europe just to sleep in the parks or some camps. Dividing the people between those wanting to help them and those asking for them to go back into their country.

If the beginning was slow for me once I found my bearing I did not want to stop reading. The story is not faultless as I’ve mentioned that I would have loved more world building and the ending felt somewhat rushed but it still gripped my attention. I rooted for Jasminda and Jack hoping they would be able to save their world.

Have you read it? Do you plan to?