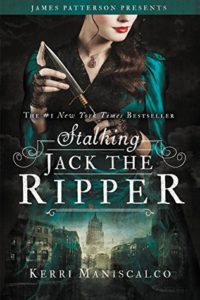 Presented by James Patterson’s new children’s imprint, this deliciously creepy horror novel has a storyline inspired by the Ripper murders and an unexpected, blood-chilling conclusion…Seventeen-year-old Audrey Rose Wadsworth was born a lord’s daughter, with a life of wealth and privilege stretched out before her. But between the social teas and silk dress fittings, she leads a forbidden secret life.

Against her stern father’s wishes and society’s expectations, Audrey often slips away to her uncle’s laboratory to study the gruesome practice of forensic medicine. When her work on a string of savagely killed corpses drags Audrey into the investigation of a serial murderer, her search for answers brings her close to her own sheltered world.

5 brilliant stars and the beginning of a new series crush

I wondered what all the fuss was about that series but after having read Kingdom of the Wicked, by the very same Kerri Maniscalco, I decided to give it a try. And, oh boy, the hype is totally deserved!

I listened to that audiobook in two days and immediately ordered the second one while I was on a book ban.

That’s how smitten I am with that series!

Stalking Jack the Ripper Is a fine blend of vintage and modern.

This story happens in Victorian London, hence the vintage feel but its characters are very modern in their attitude. Both quite shocking for their time!

The story arc is centered around gory murders of whores hitting the streets of Victorian London. There is a serial killer on the loose. Scotland Yard, and its young, clever and handsome superintendent is losing his head trying to find “Jack the Ripper”.

They will call for the help of Jack Wadsworth famous for his forensic knowledge.

His seventeen years old niece, Audrey Rose, is one of his apprentices alongside another one, Thomas Creswell. Both of these will try to solve the murders and find Jack the Ripper, embarking on a deadly game.

I confess that I had guessed who the killer was at some point and also his motive. I am very proud of myself as most of the time, I am clueless! Maybe it’s all the mysteries and crimes I began reading these last months…

That story reads itself.

It has all the ingredients that I am looking for in a book:

-rapid pace, filled with action, clues to read and mystery to elucidate;

-a love story in the making;

-historical setting in one of my favorite periode in times (what can I say, I love reading about carriages and gowns from that era).

Cherry on top, it proves my point that you can have extremely good banter, an acerbic tongue and even insult people all while using very proper language! No need to curse to give a good tongue lashing! I honestly hate that new habit of some authors to use plenty of foul and curse words in their dialogs to make their heroes seem strong and tough. If a little cursing does not bother me in some books, a lot of it becomes just vulgar to me and frankly put me off my read, even if I am reading about dark romance.

There is nothing more pleasurable than to read about Audrey Rose insulting the superintendent of Scotland Yard all while smiling and using only proper words! 😊

If you watched Bridgerton like I did recently, you’ll get what I mean with insulting people while being very prim and proper.

Now, let’s get to the characters, because I have a massive crush on both of them!

Audrey Rose comes from a noble family but she is far from a wilting flower, only interested in vapid conversations about fashion and gossips! She is a very modern young woman, fueled by an internal fire and taste for science since the death of her mother.

As I’ve already stated, she has great banter and does not fear going toe to toe with strong men, determined to prove that you can be a woman, love fashion and be strong all the same!

One of my favorite scenes was when she lectured her father about propriety, after he had tried to coerce her into submission with threats of throwing her out! She dashed out of that room, chin raised high and it was brilliant!

She has an immense thirst for knowledge and understanding.

Thomas Creswell is dashing and brilliant.

He has a formidable deductive mind, rivaling that of the famous Sherlock Holmes.

Coming from a good and wealthy family, he is very cocky. Handsome he lives for infuriating Audrey Rose. He truly loves having a rise out of her, teasing and taunting her mercilessly. He admires not only her beauty but her mind too and by pushing her, she is forced to raise to the occasion.  He is one of my new book boyfriends!

That tandem works like a well-honed machine and made that book a delight to read!

A must read and I am already off to the second book!