Standalone Sunday is a feature created by Megan@bookslayereads (https://bookslayerreads.com) where each Sunday a standalone book (not part of a series) that I loved or would recommend will be featured!

If you want to play, feel free but don’t forget to tag Megan’s blog.
This week I’d like to feature some sweet romance story written by one of my favorite authors. 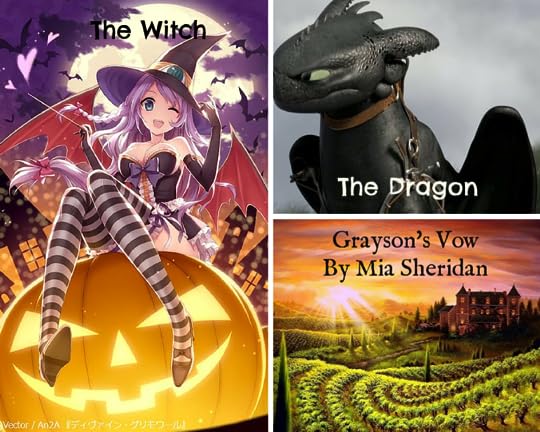 I’ve loved every Mia Sheridan’s books so far and Grayson’s Vow did not disappoint.
Strangely, I see a pattern in my reading these last days: books with dogs (luckily none was killed this time) and exceptional heroines.
It’s unusual when I root for the heroine rather than the male lead in a story but Kira was just amazing! She is the BFF we all want to give us motivational speeches and take us on crazy dares.

Kira aka “The Witch” has been rejected by her father, used by her fiancé, considered “collateral damage” in her father’s agenda and is now penniless. All reasons to hate the world and turn bitter, right? But no, not Kira. She just lifts her chin and come with a Very Bad Idea, even if her Very Bad Ideas often backlash. Compassionate, fiery, determined she has spunk and a heart of gold. She is full of life and humor (she names rats Ogilthorpe and Ortensia for the love of God!), never turns a dare down (gliding on banister or dancing with ribbons on tractors).

You think she would need the money for herself? Wrong again. She his distressed as the drop-in center she volunteers since she was a teen will have to close his doors.

The only solution? One of her Very Bad Ideas, one she had while witnessing Grayson Hawthorne being turned down for a loan at the bank: marry him to get her trust’s money, split it with Grayson and divorce one year later.

Grayson is an ex con, illegitimate son of a vineyard owner. His father passed away while Grayson was in prison and gave Grayson the vineyard. Only problem: the vineyard is in dire need, ruined and Grayson does not have the money. He made a promise to restore the vineyard to its old splendor but it just seems an impossible task.
When Kira asks him to marry, her proposal is met with haughtiness. Grayson sees her as some spoiled rich heiress needing money to go to expensive spa and does not want her help. He is very rude to Kira, playing on old wounds and insecurities.

”Vile serpent! How dare he treat me like that after I’d made him the most generous offer of his scaly life?”
”He looked like a prince, but if I were going to cast him in a fairy tale now, I’d cast him as The Dragon! A beastly, judgmental, fire-breathing dragon.”

Soon Grayson will reconsider his position and will reluctantly agree to marry for money.
Grayson has been hurt in the past, betrayed and rejected. He guards his heart and emotions, being very callous with Kira. Little does he know she has a temper and won’t be trampled upon. The sparks fly and I loved the banter.

”You can’t just flounce in someone’s personal habitations without Knocking!” “I did Knock! And I’ve never flounced in my life.”

Grayson’s life has been turned upside down since The Witch entered his life : ”My new puppy named Sugie Sug. What the hell was happening to my life?” There is fire, sass and passion.

Day after day, Kira melts the ice around Grayson’s heart. He broke my heart many times in the book as his childhood was progressively unveiled. He took blow after blow, one of the greatest being his father’s betrayal. Alone, he would have retreated behind his walls, cut himself from emotions whereas Kira chose to open her heart each time she’s been hurt. She refused to turn cold, hateful, bitter.

”There is always pain in this life. Not just for me, not just for you – for everyone. You can’t avoid it. And sometimes the pain is so great, it feels as if it carves out the very essence of who you are. But it doesn’t, not if you don’t allow it to. It carves out a place in you, yes, but love is meant to fill that space. If you let it, pain makes more space for love within you. And the love we carry in inside makes us strong, when nothing else can.” His dark eyes searched mine. “Do you believe that,” he asked. “I know that.”

Grayson’s vow has been an incredible read, full of emotions, fun, wonder and tears. I can’t wait to read Mia’s next book, expected for March 2016.

Want to read it as well? Grab your copy here -> http://amzn.to/2oSVKXq