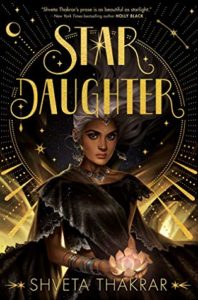 If the night sky holds many secrets, it holds Sheetal Mistry’s secret the closest. A secret that explains why her hair is the silver of starlight, or why some nights the stars call Sheetal by name.Stars like her mother, who returned to her place in the constellation Pushya years ago. Since that day, Sheetal has been forced to hide.

But as her seventeenth birthday draws near, the pull from the sky is growing stronger. So strong that Sheetal loses control, and a flare of starfire burns her human father—an injury only a full star’s blood can heal.

Sheetal has no choice but to answer the starsong and ascend to the sky. But her celestial family has summoned her for a reason: to act as their human champion in a competition to decide the next ruling house of heavens.

Desperate to save her father, Sheetal agrees. But nothing could have prepared Sheetal to face the stars’ dark history—or the forces that are working to shut the gate between the realms for good.

1) First let’s admire that fabulous cover by Charlie Bowater! And I had the special edition of Fairyloot meaning there is a fantastic art on the reverse jacket!

2) I had high expectations for that book, being sold as a competition in the star realm. Alas, the competition felt flat to me, barely there. There was talk of it but the preparation, rehearsals were not detailed. I expected a “battle” between champions with several rounds, kind of Hunger Games but with talents. In reality, there was not much of it.

3)The story was up for a great start!
I loved learning about the life and secrets Sheetal had to maintain, I loved when she began transforming and I loved the magic market. The “trip” to the stars with Minal jumping from cloud to cloud.
But then… the rest dragged on really.

5) I loved the idea, the universe, the mythology and the tales.

This is not a bad YA but I didn’t find it exceptional either. Maybe I had too high expectations? Just..read other reviews and don’t let mine stop you as reading is a personal experience and you might end up loving this story!

Have you read that story?