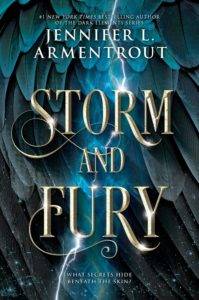 Eighteen-year-old Trinity Marrow may be going blind, but she can see and communicate with ghosts and spirits. Her unique gift is part of a secret so dangerous that she’s been in hiding for years in an isolated compound fiercely guarded by Wardens—gargoyle shape-shifters who protect humankind from demons. If the demons discover the truth about Trinity, they’ll devour her, flesh and bone, to enhance their own powers.When Wardens from another clan arrive with disturbing reports that something out there is killing both demons and Wardens, Trinity’s safe world implodes. Not the least because one of the outsiders is the most annoying and fascinating person she’s ever met. Zayne has secrets of his own that will upend her world yet again—but working together becomes imperative once demons breach the compound and Trinity’s secret comes to light. To save her family and maybe the world, she’ll have to put her trust in Zayne. But all bets are off as a supernatural war is unleashed…

Bullet point review as I am way behind on writing them!

-I haven’t read the other books in this series/universe but I had no difficulties to catch up! The world of the Wardens (Gargoyles) was explained with enough details throughout the book that I could fall into it happily.

-I liked reading the book as it’s kind of addictive and I stayed on my couch just the whole afternoon because I wanted to know how it would end.

–This is not a stand-alone or I’d be rather dissatisfied with the ending as we have more to explore about Trinity and Zayne’s relationship;

–Having followed Jennifer for years now, I could immediately see the similarities between Trinity and Jennifer! I thought it fun as I imagined the author projecting herself in a badass character 😉

What I am speaking of is Trinity’s progressive loss of her sight.

-The plot twist was unpredictable and dramatic! Well done here.

–Zayne was not only smoking hot and badass but he was genuinely a good guy. He is a hero you’ll fall for pretty quickly.

–Trinity is a badass and extra special but she also had a teenage mushy heart, all wanting to find “The One” despite her father’s grand scheme. She knew she would be used as a weapon someday but being “one of a kind” made her lonely.

-I also liked how Jennifer introduced some politics and opinion in this story that will probably echo with many readers.

–I also appreciated the trope “the world is not white or black but in shades of grey” or “don’t believe everything you’ve been told since childhood”. Because that’s how it happens in real life too.

-one of the best assets of this book was the banter and the snarky comeback. I love sarcasm.

-If I had a lovely time reading the book it did not amaze me like Lux series of The Problem With Forever . It still remains a good story, perfect to enjoy on a lazy day at the pool.