I am in my third day of Emma Scott’s week as part of the #T4AuthorsChallenge organized by Collector of Book Boyfriends and Totally Bex.

Today was one of the hardest choices of the week alongside the one coming tomorrow.

It was nearly a tie!

I have several favorite male characters from Emma’s stories.

Two are really taking the lead.

I nearly chose Sawyer from “Forever Right Now” because he was so courageous and did all the right moral choices, especially the most difficult ones. Plus: single dad and I love single dads (don’t know why don’t try to understand my weird mind).

What I said about Sawyer should explain it all:

“Of course when I read about a guy so dedicated to his little girl my ovaries exploded on the spot! It was just too sweet and warm witnessing this protective daddy dedicate his life to his tiny daughter. Sawyer Haas is an exceptional character. He shoulders so many burdens alone. He is tired, so tired. He was smart, sexy, loyal, caring and exhausted. Emma won’t spare him any stress in this story and it was truly a wonder he was still standing by the end of the book.”

Today I chose another fantastic character (aside Jonah, Haaaa Jonah!) 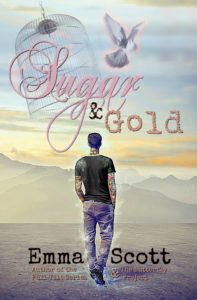 My winner of the day is Nik from Sugar and Gold

“The flashbacks in Nik’s childhood really broke my mother’s heart! I just wanted to protect that little boy so bad! To tell him he was wonderful even with his special ability. That I saw him and loved him for all that he was. And I really, really wanted to shock these evil doctors just to see if they would like to have their brains fried!!! Evil, clueless, mad scientists they were. Shams of doctors!!!

As usual Emma Scott writes heroes somehow battered by life. The kind of heroes you can’t help but fall madly and completely in love or in like with.
Nik has a special “gift” or rather he sees it as a curse. He can read other’s emotions and sometimes hear their thoughts. From a young age he’s been rejected by his mom and prodded not kindly at all by doctors. 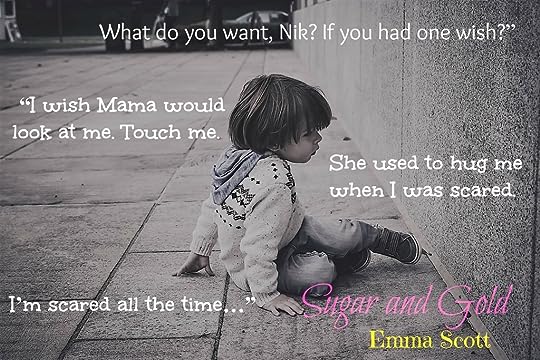 “What do you want, Nik? If you had one wish?” “I wish Mama would look at me. Touch me. She used to hug me when I was scared. I’m scared all the time…”
He’s spent his life looking after others like him to no avail. He is lonely. So, so, so lonely. And his brain is constantly assaulted by these sensations and emotions it’s just too much.
“So much misery in the world… And all of it shoved down my throat, every waking hour of my life.”
What’s the point in living like that really?
“If something didn’t change quick, I wasn’t going to make it to thirty. Hell, I wasn’t going to make it to twenty-five. “
So now tell Dr Sophie if you don’t want to just hug this man so hard you’ll nearly suffocate him! Right yes?”

Do you understand why I chose him in the bunch of fantastic male characters that Emma wrote?