Top 5 Tuesday is back! Long hosted by Shanah @bionicbookworm (she was the creator), she has now new challenges awaiting her and Meeghan from@meeghanreads has become our new mastermind!!!

As I stated in my title, we are all screaming about fair treatment, equality, diversity etc so I thought to include in my post some of my favorite sorcerers, magicians or wizards!

Why should men sit on the sideline right? And I will share some favorite quote as well because I love quotes!

Recent discovery and very powerful witch with an Uber sexy vampire for husband: Diana Bishop from A Discovery of Witches by Deborah Harkness! 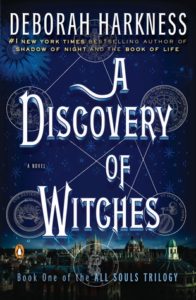 “My ideas about vampires may be romantic, but your attitudes toward women need a major overhaul.”
― Deborah Harkness, A Discovery of Witches

“It’s a classic love story. I hit on him at a party, he asked me out, then we fought an epic magical battle between good and evil side by side, and now we need a vacation.”
― Cassandra Clare, The Red Scrolls of Magic

“We are the Thirteen,” she said. “From now until the Darkness claims us.”
― Sarah J. Maas, Kingdom of Ash

By the way I am still crying reading that quote!

Fourth choice: Nathaniel Thorn from A Sorcery of Thorns by Margaret Rogerson

I so love his sarcasm!

Last but not least, Nina Zenik from Six of Crows duology by Leigh Bardugo. She is a grisha so she has magic and it’s akin to a witch right?

“Nina heaped a plate with food and plunked down beside Matthias on the couch. She folded one of the waffles in half and took a huge bite, wiggling her toes in bliss. “I’m sorry, Matthias,” she said with her mouth full. “I’ve decided to run off with Jesper’s father. He keeps me in the deliciousness to which I have become accustomed.”
― Leigh Bardugo, Crooked Kingdom

Now do tell me, do we share some favorite?