From the national bestselling author of the Ten Tiny Breaths series and The Simple Wild comes a poignant story about a girl trying to change her future while evading her past.Almost sixteen-year-old Aria Jones is starting over. New postal code, new last name, new rules. But she doesn’t mind, because it means she can leave her painful regrets behind. In the bustling town of Eastmonte, she can become someone else. Someone better.
With the Hartford family living next door, it seems she will succeed. Sure, Cassie Hartford may be the epitome of social awkwardness thanks to her autism, but she also offers an innocent and sincere friendship that Aria learns to appreciate. And Cassie’s older brother, Emmett—a popular Junior A hockey player with a bright future—well … Aria wishes that friendship could lead to something more. If he didn’t already have a girlfriend, maybe it would.
But Aria soon finds herself in a dicey moral predicament that could derail her attempt at a fresh start. It is her loyalty to Cassie and her growing crush on Emmett that leads her to make a risky move, one that earns her a vindictive enemy who is determined to splinter her happy new world.

“This is not supposed to be happening again.”

First the most important thing about that book: I gobbled it up in one day and completely loved it!

Second: my friend Melanie, huge KA Tucker’s fan will be in heaven as the male character is a hockey player (high school) living in Canada but has already been recruited to attend college in Minnesota! How great is that Melanie right? That book is made for you!

Now it will be very difficult to write the review without giving away any spoiler but I am committed to write this without one hint to big reveals! Because a big part of the fun reading this book is guessing WHY Aria and her mom are starting over.

What happened to Aria?

I guessed something traumatic happened but I was right …and wrong! I won’t tell more about the plot.

What I will do is write about the characters, about what that book made me feel, about some “non spoilerish” topics broached in the book.

Aria is very easy to love. She is that soon to be sixteen years old girl starting fresh with her mother and now living with her great uncle Merv.

Her new neighbors have two kids. Cassie who has autism and is a really solar girl and her big brother Emmet who is the boy next door every teenage girl would fall for.

Aria will soon feel very protective of Cassie, so different but so loveable. Except that some kids don’t react smartly to other kids being different. My blood boiled like Aria’s every time I witnessed one of them hurt sweet Cassie, either by ignoring her, either by making fun of the girl.

Aria will be the new girl at school and as every new beginning for a teenager this will feel daunting. Lucky for her Emmet and Cassie will take her under their wings.

Aria could be any unsecure teenage girl who has experienced something that left her mom being overprotective and closely monitoring her interaction with others. You feel that she needs to get back her mother’s trust. She really wanted to do things properly. Yet as every teenager she also wanted some freedom.

Emmet was truly the epitome of good guy. Not only was he handsome and smart but he also was great with his sister. He was kind with every odd kid at school. Always ready to protect. So empathetic. If I had been attending Emmet’s school I would have fallen for the guy. Hard. 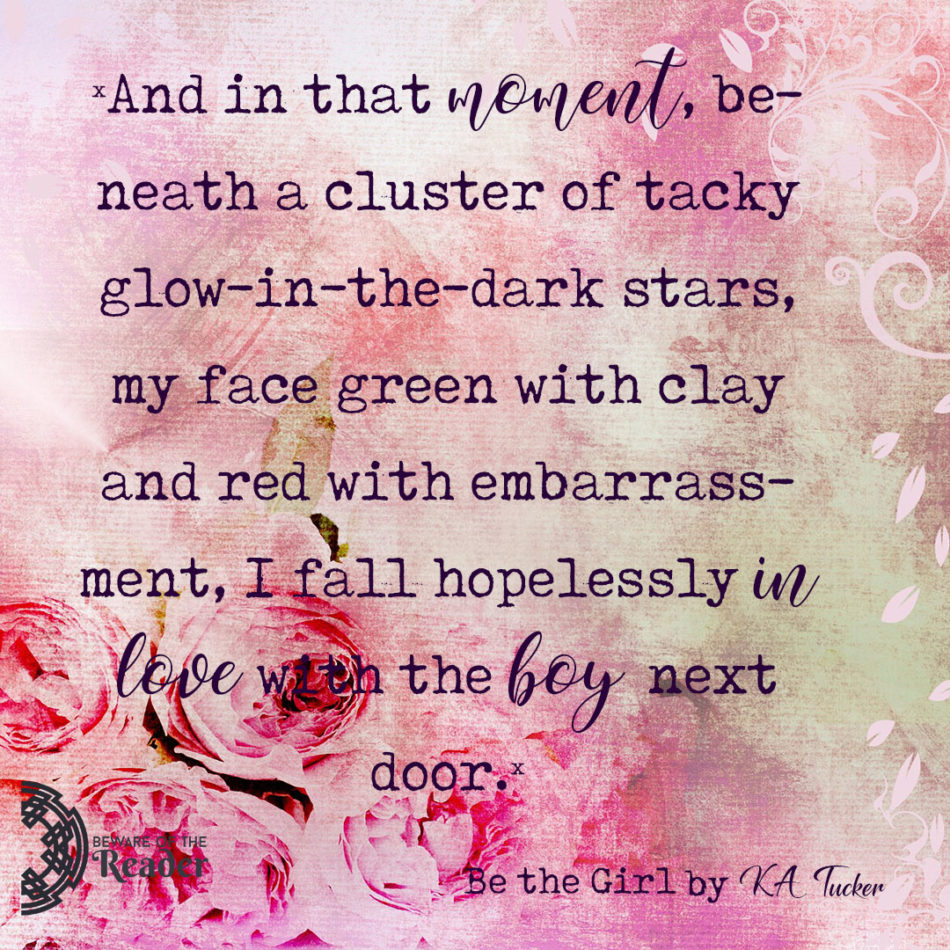 I really loved how KA Tucker portrayed Cassie. She was different but so lovely. KA Tucker did not try to hide the worry having a child with autism causes to a family. Parents worrying how the kid would fare once adult. Big brother worrying who would protect his little sister once he’ll be away attending college. These are kids needing special attention, taking a lot of energy from their families but also giving back plenty of love and joy.

All along I was following Aria’s new life, wondering what happened to her, trying to guess. I was crossing my fingers in the hope that she would get to be with Emmet even if I did not know if it was in the plan as he had a girlfriend. But a new start and love story are far from the only purpose of the book.

It goes beyond a simple easy and sweet YA story to read.

The book shows that some actions have consequences. That even the good intentions can sometimes have disastrous effects. That plans can backfire.

It also challenges us asking if everyone can make mistakes and deserve a second chance, some redemption. Does being in a dark place excuses your behavior? When you do something wrong does it make you bad?

Have you read K.A. Tucker’s books before?