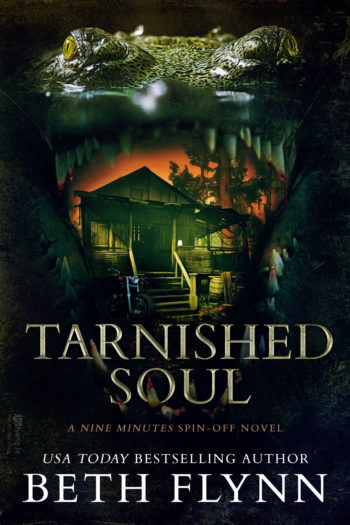 Ex-con and ruthless biker, Jonas Brooks is stunned when he encounters the selfless angel who saved his life six years ago. With his massive size and alarming tattoos, Jonas terrifies people on sight. But the beautiful, kind, and intelligent Lucy Renquest sees beyond his frightening exterior the moment she lays eyes on him.Despite being an outcast with an extremely high IQ, Lucy’s confidence and courage propels her to success. Finding the good in people is her biggest strength—and greatest weakness. When Jonas cleverly deceives her into accompanying him to a secluded cabin in the alligator-infested Florida Everglades, she’s beyond furious—until her anger fades and their passion ignites.

When Jonas and Lucy return to their normal lives, he discovers that she’s in danger. Now, it’s up to Jonas to save the woman who saved him.

Can a criminal with a tarnished soul protect his angel and find the truth before it’s too late?

“She was sweet. He was rotten. She had the appearance of a small, pale, and fragile angel. He was a large, dark-haired, and angry beast. Her innocence was as tangible as his guilt. He wore evidence of it on his face for the whole world to see.”

Beth Flynn is the queen of tricksters!

In Nine Minutes trilogy I wrote how scheming her mind was and how she amazed me! Making connections with past events throughout the trilogy and weaving a very elaborate plot without ever losing her reader.

In Tarnished Soul, as it’s a standalone, she did not go that far BUT she still managed to trick me at least three times in that story!

I won’t give away more details but she made me believe one thing while it was another one happening.

And I SO LOVE IT!

What I also adore about Beth it’s her “down to earth” and mature writing.

She is writing about bikers who are outlaws. But unlike some authors who use lots of cussing every five words, using over the top behaviors to make their characters feel badass and bad guys, Beth never goes for the cheap tricks.

Beth’s writing is “matter of fact” and does not try to romanticize or sugar coat these outlaws. She never shies away from giving you all the gory and brutal details of their world and their deed. These are big scary guys with a hot temper and swift revenge.

Jonas Brooks was scary and brutal and violent and…everything you would imagine from an outlaw biker. That gave a very real and gritty vibe to the book. You could compare it to Sons of Anarchy and you’d be absolutely right.

When the synopsis says that it’s an emotional slow burn opposite attracts romance this is exactly what this is!

On the one hand you have Jonas Brooks.

Behemoth of a biker, scary looking and doing all dirty work for Anthony Bear.

The more I read about Brooks in the beginning, the more I wondered how Beth would make me love of even just like him!

You see Sons of Anarchy? When they kill and torture their rivals? Well, that was totally Brooks!

One of the first scenes had him set a dude on fire and another one “lost his virginity” in a restroom. Don’t imagine he is a lost bad boy that just did some “light” bad things because this is totally not Brooks! Someone even explained that if one man could rival Grizz in the “evil” department, that would be Brooks.

Slowly, page after page, I came to like and even love Brooks.

Did I see him as a fallen angel that could be redeemed?

The guys said it himself: I won’t change because that’s who I am.

“The thought didn’t make him sad. He knew himself all too well and didn’t want to change. He was who he was. Who he’d always been. And even if he wanted to, he wouldn’t be able to change now. Not even for Lucy.”

But I got to respect that he had some hard limits like never hurt women or kids. Express his anger on people that were no saints either. And above all else, he always would protect Lucy.

And that is what I expect from my heroes: big scary possessive and supportive alpha!

On the other hand you have Lucy Renquest.

She is Brooks total opposite!

Small, thin, pale with big beautiful eyes magnified by glasses. She is sweet, caring, kind and has a brain rivaling Einstein!

Lucy must be my favorite heroine of Beth and she reminded me so much of me!

I was one of the nerds at school. I loved school! I loved and still love learning and a good intellectual challenge. But unlike Lucy, lucky for me, I have never been bullied!

When Lucy meets Jonas for the first time, she will look like his saving angel. She is not repulsed by his scary appearance. She sees under the veneer and found someone worthy of knowing.

When the two meet six years later, Jonas will make a move “à la Grizz” or “à la Christian Bear”. Those of you who have read these stories will know what I mean.

Let’s just say that when Beth’s heroes want the female MC attention, they go all out to make certain that she’ll have no other choice than to see and listen to them!

What I loved in this story, tricks and writing aside, was truly the characters growth!

Yet Brooks will remain true to himself. He’ll still do very bad things. Because that’s who he was! And I totally preferred that Beth didn’t try to miraculously change him like you can see in other romances with the bad guys just waiting for the female character to have a 180° turn.

Yet Brooks will change. Because Lucy will influence him. Soften some edges but without totally erasing them.

And Lucy will go from little mouse and nerd to self-assured woman and still a nerd.

No, she won’t suddenly become a “biker babe” with very short skirts, wearing leather and doing lots of cussing. Because that’s not who she is either.

But same as she influenced Jonas, he’ll change her and give her the tools to become bolder, stronger yet than she was.

If you loved the Nine Minute trilogy and its spinoffs, this is a book not to be missed.

And if you simply love gritty books with  scary bikers, strong female characters and twists, it should also be read. It would be better if you read at least The Iron Tiara before if you don’t want to read the whole series but even without reading it, I think it could still be read as a standalone without you being lost.

PS Thank you Beth for featuring my Bella in your book. I had a big smile reading that part 😀

PPS: Have you seen that cover? Hang Le did an amazing job!