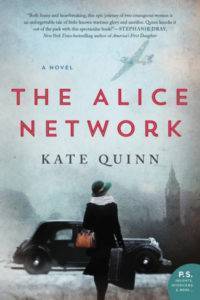 In an enthralling new historical novel from national bestselling author Kate Quinn, two women—a female spy recruited to the real-life Alice Network in France during World War I and an unconventional American socialite searching for her cousin in 1947—are brought together in a mesmerizing story of courage and redemption.

Thirty years later, haunted by the betrayal that ultimately tore apart the Alice Network, Eve spends her days drunk and secluded in her crumbling London house. Until a young American barges in uttering a name Eve hasn’t heard in decades, and launches them both on a mission to find the truth…no matter where it leads.

“What did it matter if something frightened you if it had to be done?”

The Alice  Network is brilliantly plotted around two periods in war time: the first World War when we follow Eve Gardiner’s memories and the aftermath of WWII with Charlie’s quest to find her beloved cousin, Rose who disappeared under the Nazi regime.

It took me some time to fall into the story for as much as I instantly liked Charlotte St Claire known as Charlie, Eve did not stir any compassion in the beginning. Drunk, aggressive, rude …are not appealing character’s trait.

But the more I learned about the fascinating and dangerous past of Eve, the more I admired that woman with a steely backbone and cold blood when confronted with danger!

Charlie is barely eighteen and a math genius. She is American and comes from a wealthy family that has been hit by the tragedy of war. She is unmarried and pregnant, something that is heavily frowned upon in 1947 and has been coerced by her parents to follow her mom to Switzerland and have the “little problem” taken care of.

After, it will be marrying some respectable man without anyone ever knowing about her troubled time.

Rose disappeared around 1944 in occupied France and all the enquiries made by Charlie’s father came to a dead end.

Now that Charlie stopped in England en route to Switzerland, she’ll escape her mom and go to London. To the last person who has heard of Rose. To Eve Gardiner.

Her encounter with Eve is brutal.

The woman is drunk as skunk but holds a Luger steadily in her mangled hands. After some persuasion from Charlie, she’ll allow Charlie to sleep in her house before going back to her mom the day after.

When Eve wakes up and remember the name Charlie gave he, Le Lethe which is Rose‘s last workplace at a restaurant for a Monsieur René, she is a woman on a mission.

Eve with her handsome Scottish driver Finn will accompany Charlie in her quest to find what happened to her cousin.

We alternate chapters in the “present” or rather 1947 with a pregnant Charlie on the routes de France looking after her cousin and “past” chapters in 1917 following a young Eve during the first world war.

Eve proves to be a fascinating character.

She was an orphan, half French, half English and had lived in Lorraine in her youth, hence speaking German too. She is living in a boarder room in London and has a real craving to fight in this war. Do something else than sort files.

She has a stutter and no one takes her seriously. But that’s when Major Camron will notice that young woman of 22 years who is looking as she was 17. With big doe eyes, having everyone believe that she is simple minded while in reality she has lots of wits, a sharp mind and cool blood in any circumstances.

The more stressful the circumstances the steadier Eve feels.

Eve will be recruited as a spy and join the most famous spy network: The Alice Network. Managed by Lili, another formidable heroine Eve known under Marguerite or Daisy in English as her spy name will join the restaurant staff of Monsieur René.

René is a collaborator and offers all sort of pleasure of the mouth to the German officers.

I honestly was in awe of Eve and Lili as well as Violette. All these women, tiny things took enormous calculated risks to help their country in the shadows.

Eve will thrive under danger. She is finally useful to her country and someone recognized her value.

Eve was smart, cunning and brave.

She did all sort of sacrifices and working for the cold and calculating René was no easy task.

Back and forth we go, between past and present.

Following these women 30 years apart but now united in their quest.

There were so many topics developed in this book.

-Social expectations for one with Charlie unplanned pregnancy.

–Social status of the women as Charlie was unable to access her trust fund and own money without her father’s consent, even being of age. Or when Lili talks about what’s expected of women: marry and have kids but that does not suit every woman;

-The dirty work spies did in the shadows. So important, so dangerous.

–Patriotism as these women were as courageous as most soldiers. They were ready to sacrifice their virtue, their freedom and their life to help win the war.
Back to Charlotte quest.

-PTSD as Charlie’s brother could not go on with life after having fought in a nightmarish war or Eve’s daily nightmares remembering René or Finn’s outburst of blind rage after the war changed him.

–Survivor guilt and guilt of having betrayed your friends;

–Revenge which is a powerful fuel to give an older woman a second youth, focused on making her tormentor pay for his crimes.

This is an ode to women. To their strength and intelligence. To their important role played in both wars.

I bow low to the Lili, Marguerite, Violette, Edith Cavel and the likes who risked their lives every day to contribute to the war effort.

The narrator was also extremely good and embarked me on this story of two women whose fate will cross and lead them on memory lane.

I warmly recommend this book if you are a fan of historical fictions mingled with spy and thriller genre.

Have you read it? Or any spy books?