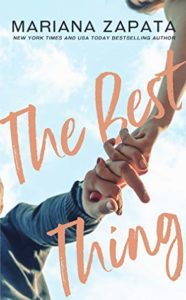 Too bad no one gave Jonah Collins the memo.

The Best thing is a good slow burn romance that will have you smile, sigh and spend a good time.

Lenny is a tough cookie on the outside all bragging and attitude but a little marshmallowy inside. 😀

And I loved that side of her!
Former world judoka champion she can kick everybody asses while knitting a new scarf but she also has a golden heart.
When the story begins she is very angry surfing on some internet site and we get that she is reading news about an ex she is not over yet or at least bad blood happened.

Said ex Jonah is a world champion rugby player.
I won’t give too much details as I don’t want to spoil the fun but let’s say that he screwed up big, leaving Lenny in a tight spot and with heaps of anger and resentment.

Yet the man is back and believe me when I say that I thought he would have much groveling to do!
Only…
Only it’s a bit more complicated for reasons I won’t give you again not to spoil you.

Only Jonah is difficult to resist and hold a grudge against because he simply is the sweetest and shier giant that I have read about! Sexy as hell he is no womanizer at all and made me melt like a puddle of goo with his unbelieveable kindness and soft low voice.
Honestly there is nothing better than a huge man, plowing big brutes as a living who is sweeter than a lamb, unsure of himself with others and blushing adorably!
How did you want me to resist hu?

Lenny will have a hard time staying mad too even if she will call him names for some time in her head.

The story will focus around these two and something more but again no telling.

I loved the characters and their dynamic.

Lenny may have been abandoned by her mom she’s been raised by Granpa Gus, former world box champion, gym owner and the best granpa you could imagine! He has loved and supported Lenny and these two have such fun banter! He may be above seventy he still hides in the house to frighten the crap out of Lenny when she gets back home!

Peter is Gus friend and works at the gym. He is a soft man and holds impressive records in jiu jitsu. He’ s been like a second father to Lenny and is the voice of reason most of the time.

Of course let’s not forget Luna who is popping from time to time in this story but not enough to my taste!

This is a character driven story, a cute story thanks to Jonah’s personality, said banter and other elements.

I had a good time reading it but it felt like the story dragged some time. I would have loved having an added angsty element in the middle or two third of the story. You know the kick of flavor to make your dish go from good to succulent.

So a good slow burn but this does not beat From Lukov With Love or The Wall that are still my favs by Mariana. But hey I guess everyone has his own crushes right?

Have you read it? Do you love slow burn romances?

Leave a Reply to Kayla @ Books and Blends Cancel reply