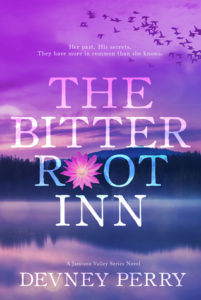 Her past. His secrets. They have more in common than she knows.Maisy is happily content with the life she’s built for herself and her young son in small-town Prescott, Montana. Her child is thriving, her business is growing, and her family is as close as they’ve ever been. But when a handsome stranger walks into the lobby of her motel, her simple life is swept up in a wave of affection for his gentle heart. None of those feelings can be trusted, though. She made that mistake before with another man. The man she murdered.

Hunter was a different man when he first saw Maisy Holt from afar. He took one look at her and ran in the opposite direction. But years later, he’s back in Montana and unable to keep his distance. He shouldn’t have tried to find her but he never was good at rejecting temptation. The promise of the good she could bring into his life is too hard to resist. Maybe if he can disguise the lies and hide the deceit, he can keep her from learning the truth. Because his only chance at a future with her is by burying his past. 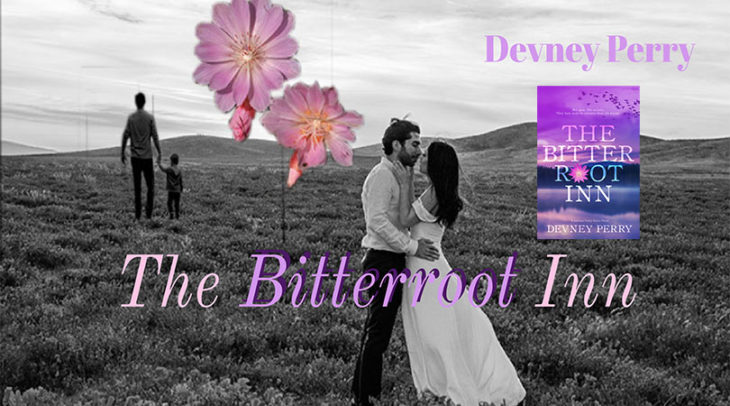 Where can I find Doctor Kalvin Klein? I feel feverish all of a sudden*add fanning myself*

What? It’s the sex/paint scene you say?

Well you may be right because that scene with a man on his knees will be religiously stored to get back at the end of 2018 when Angelica will once again enroll me in one of her challenges with “the best sex scene”.HOT!!!!

The Bitterroot Inn is once more an excellent addition to Devney’s series featuring sexy and protective males and wonderful heroines all this happening under the protective (and inquisitive) eyes of Prescott tight knit community.

In about five books Devney has built her whole universe in Montana with recurring characters who feel now part of my family and friends. That’s what I LOVE in Devney’s books: the consistency, the main and side characters that we learn to know and like. You could compare this to Kristen Ashley”s series like Rock Chick or ….

Devney writes alpha male *my favorite kind* strong heroines colorful side characters and a good plot with just the right amount of twists and angst not to overdo it. All this happening in dreamy Montana.

We got to know Maisy in The Coppersmith Farmhouse and know what tragedy happened to her and Gigi. The Bitterroot Inn is featuring Maisy as main character right alongside Hunter Faraday also known as Dr Calvin Klein.

I can honestly say that Maisy is in a tie with Gigi as my most loved female character for this series. Maybe because they both are great moms and I can feel a kinship?

Maisy went to Hell and back. What Everett did to her still has repercussion in her life.

She protects her son Cody like a mama bear and I have the utmost respect for that mom who prefers painting at night her son’s room while he is at a sleepover just to surprise him. Sleep is second to Cody in Maisy’s books.

She also is a hard worker and a pillar of her community. Her intense curiosity and endless chatting are adorable quirks. “Maisy Holt was pure joy. She was goodness personified. She was a beam of sunshine.”

She has a huge heart and not a angry bone in her body.

“You’re forgiving, not a doormat. And I think that’s a damn strong trait. When someone hurts you, the easy thing to do is cut them out, but you don’t. You give second chances when people probably don’t deserve them. You keep your heart open instead of becoming bitter and jaded. There’s nothing doormat about you.”

Do you see now why she is my favorite female character with Gigi?

When she meets Hunter for the first time it’s insta-lust. Kaboom! The room went suddenly as hot as Death Valley and her brain cells temporarily hightailed to another part of her anatomy leaving her a mess. Speechless and unable to form a coherent thought aside “I want!”.

“My visitor was straight out of a magazine. His light brown hair was tied back in a neat man bun. His strong jaw was covered in an expertly manicured beard. His caramel-brown eyes, framed with long, dark lashes, were aimed at me with such intensity they nearly knocked me off my stool. “

Confession: give me Dr Hottie and I would not fare better.

Fortunately she was not alone in her brainless state Hunter was not better. He would have given the moon to Maisy and his naked body with a red knot around. LOL

I’d seen her for the first time just a minute ago, but one look and all I could think about was making her mine. Two minutes ago, I would have told you that sh@t didn’t happen in real life. Men like me didn’t believe in love at first sight. Two minutes ago, I was a chump.

If you don’t like insta-love/lust don’t read it! If it’s one of your favorite trope just dive in!

It’s now established that the chemistry was off the charts BUT Maisy is careful as she is not alone for one. She does not want to introduce a new male in Cody’s life just to see him disappear weeks after leaving Cody inconsolable.

Maisy hesitates to trust another man with her heart. She already made a terrible choice with Cody’s father and Hunter is not forthcoming. He has secrets and Maisy will have to trust him without knowing his whole story. Once she’ll know everything will she still want him?

For someone as curious as Maisy it will be a real challenge to stop prying and let him unveil his past at his own pace.

“And stop being such a total flipping hypocrite. My closet was full of skeletons, skeletons I had no intention of letting out this early in a potential relationship. I couldn’t expect him to reveal his secrets when I was keeping my own. It was time for me to chill out and just let things develop. “

Now their road will not be an easy one especially with Maisy’s tendency to kick Hunter in the nuts… yes the lady can give a ninja a run for his money. Beau taught her well!

I personally think try hurting a man in his male part and if he sticks he is THE one LOL.

Let’s not forget that old secrets will resurrect and an unexpected villain will threaten Maisy’s happiness.

Hunter is a dreamy hero.

Not only is he handsome but he is very protective of Maisy and he is in love with Cody. He would do anything for the little boy and I’m a goner for a man dedicated to kids. As Gigi said: “There’s something truly magical about a man falling in love with your child, isn’t there?”

He is supportive, caring, smart, gifted… everything you could dream of. From the first moment he met Maisy he fell for her. He really is the right choice for Maisy. He is a good man.

“She had her brother and her family for that. I was just a stranger. Still, I wanted the job. I wanted to be the man rubbing her back and kissing her hair. I wanted to hold her hand and let her squeeze it with all her might. I wanted to tell her how beautiful she was as her baby made its way into the world. How fucked up was that?”

I also adored the continuity in the series. Side characters in this book were main characters in the others and we get to see what happens to Jess, Gigi, Rowen, Sabrina, Beau, … Life goes on babies are born, kids grow and go to prom. It’s like keeping in touch with old friends.

A must read if you have read Devney’s other books and if you haven’t already what are you waiting for???