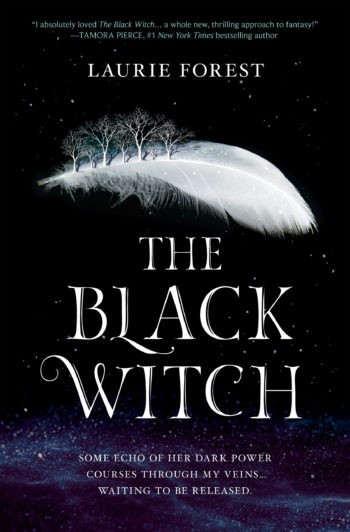 A new Black Witch will rise…her powers vast beyond imagining.Elloren Gardner is the granddaughter of the last prophesied Black Witch, Carnissa Gardner, who drove back the enemy forces and saved the Gardnerian people during the Realm War. But while she is the absolute spitting image of her famous grandmother, Elloren is utterly devoid of power in a society that prizes magical ability above all else.

When she is granted the opportunity to pursue her lifelong dream of becoming an apothecary, Elloren joins her brothers at the prestigious Verpax University to embrace a destiny of her own, free from the shadow of her grandmother’s legacy. But she soon realizes that the university, which admits all manner of people—including the fire-wielding, winged Icarals, the sworn enemies of all Gardnerians—is a treacherous place for the granddaughter of the Black Witch.

As evil looms on the horizon and the pressure to live up to her heritage builds, everything Elloren thought she knew will be challenged and torn away. Her best hope of survival may be among the most unlikely band of rebels…if only she can find the courage to trust those she’s been taught to fear.

OK I adored that book and am currently flying through The Iron Flower, all while wondering why I waited so long to read that series!

But on the other hand, I am happy I waited because the last book is not out yet and I know it will be a looooong wait!

Laurie Forest has written a powerful and riveting series filled with flawed characters, where good will oppose evil in a magic race to save the world from tyranny.

What’s surprising is that this book has one of my pet peeves: a love triangle! I usually hate them but …I still am enamored with this series so go figure!

Let’s try to put some semblance of order in this review, beginning with: what’s the Black Witch about?

The Black Witch follows Elloren Gardner and her siblings when she attends her first year of university. Elloren and her brothers are Gardenians. They lost both parents at a young age when there was a war, the realm war, lead by their fierce grandmother and former black witch.

They have been raised by their uncle, a violin maker, a gentle soul with an open and accepting heart.

Here is already the first contradiction.

Because their revered grandmother worked and battled to keep the “purity” of the Gardnerian race against other “evil” races like Lupines, Fae, Icaral, Selkies, and many other races.

When their grandmother was very close minded, their uncle raised the siblings to accept everyone whatever the race.

Before Elloren can attend university, her aunt, a very important player on the mage council asks that Elloren spends a week with her. Elloren’s aunt has a plan for Elloren as she wants her wandfasted (the equivalent of a marriage) with Lukas Grey a powerful young mage.

When Elloren meets Lukas, there is undeniable attraction there but also something dangerous. As Elloren promised her uncle not to wandfast before finishing university, Elloren’s aunt will try to break her by having her lodging in miserable condition at the university and not paying for her tuition. Elloren will have to work in the kitchen to be able to afford university. Or wandfast with Lukas.

And when you know that Fallon Baine, the potential next very powerful Black Witch has set her eyes on Lukas, Elloren’s life will very soon become very miserable as Fallon is a real bully!

Elloren’s aunt is manipulative and will prove to be a despicable human being. She also is rooting for Marcus Vogel to be elected as the next mage. And Marcus Vogel is akin to Hitler. He will relentlessly work to eradicated all non Gardenian people.

Elloren is the spitting image of her grandmother but she has no magical power. Yet she will be hated by all non Gardnerians at the university. When Elloren arrives at the university, she has an open mind but as she soon will be bullied by the other races while having no means to defend herself, she will turn to Lukas Grey to help her. And I HATED what he did. I also hated how Elloren seemed to turn into someone bigoted. I really really feared what she would become! To the point that I had to call for help in a group chat because I was becoming anxious!

Soon though Elloren will seek answers about what her people tell about their history and about the purity of their race. Forced to room with two Icarals, considered evil but one of them being such a gentle soul and having a Lupine as lab partner is…confronting.

That book series has many riveting ingredients and tropes!

-Great and relatable characters. Not only Elloren but her siblings and friends were multi layered characters, flawed and full of surprise but also very easy to relate with!

Elloren will have a powerful character’s growth in that story. From naïve and fresh to bitter and bigot going to having eyes wide open and standing against the oppressors, even if it was incredibly dangerous, even if it was her own people.

It takes courage to oppose your own people, to question what you’ve always been taught! This is a story about redemption, about changing your ways and your views while befriending people different from your race and beliefs. Friendship is a powerful tool to erase intolerance and bridge cultural gaps.

Not only will Elloren have deep feelings for someone and a growing attraction for Lukas but her friends and siblings will also develop feelings. For a romance reader it’s heaven!

I was literally riveted to my seat all along! Wondering if Elloren would have some power awakened. Wondering what Fallon would do to her. Wondering what would happen if Marcus Vogel came into power. Then fearing for all the other races. Crying when atrocities were committed. Raging at how unfair that world was. There was never a dull moment and the pacing was just perfect!

Rarely have I seen a book so diverse as The Black Witch! The diversity in this book manifests in the many different races mingling at university, at the huge magical lore. I also couldn’t help but experience a strong relent of Nazism in the book. Marcus Vogel could be compared to Hitler with his ideas of race purity, race supremacy and later on, the numerous edicts enslaving other races or making it open season for torturing and killing non Gardnerians people or homosexuals among Gardnerians. Many scenes reminded me of the Shoah and I was in tears more than once at the atrocities made to these poor innocent people! I raged! I cried! I wanted to stop listening to the book as it became unbearable to witness these cruelties. But feeling such extreme emotions is also a testimony to Laurie Forest’s talent! She had me completely immersed in her story!

Because we still don’t know why Elloren can’t use her powers nor what the mysterious Yvan is exactly! Many questions still remain at the end of the book.

Laurie Forest took great care on building that world with its many races, religions and beliefs. Not only do we learn about Gardnerian traditions and history but about those of many other races too! I also loved the feel of the university that had me imagining something between medieval, Lord of the Rings and the Cruel Prince.

Honestly, I just have two words to say to you: read it!