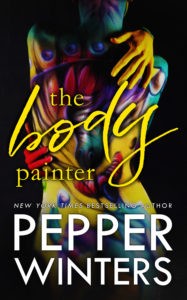 “Must be slim, able to stand for long periods of time, and be impervious to the cold.”The headline caught my attention.

The second line piqued my curiosity.

“Able to hold your bladder and tongue, refrain from opinions or suggestions, and be the perfect living canvas.”

The third made me scowl.

“Other attributes required: non-ticklish, contortionist, and obedient. Must also enjoy being studied while naked in a crowd.”

The fourth made me shudder.

“Call or email ‘YOUR SKIN, HIS CANVAS’ if interested in applying.”

The final made my heart race.

I should’ve kept scrolling past the advertisement.

I should’ve applied for the boring receptionist job at minimum wage.

I should’ve clicked on any other job where I got to keep my clothes on.

My interview is tomorrow…

I NEED to know what will happen next! You are just enjoying torturing us I know it!

Okay folks, what’s this book about and should you read it or not.

About reading it or not, know that you must love a big dose of mystery in your romance, tortured and flawed hero AND there are some scenes, few luckily, very very very hard to read because …abuse.

I won’t say more as I don’t want to spoil your fun about this but I honestly skipped said scenes because it was too hard for me.

You see when the author does her job properly, as in The Body Painter, I am totally invested in the characters. I hurt with them. And when they have to go through some specific kind of violence, when it’s more than hinted at, I suffocate and just want to throw up.

That’s what happened to me here, I simply could not stand it. This emphasizes the stellar job done by Pepper Winters writing this gripping story.

The Body Painter is about what you could call soul mates or star-crossed lovers.

Olin and Gil met in high school and both were very lonely, both were abused in their own ways.  The story is told between past from Gil’s point of view and present from Olin’s.

The flash backs were fewer than the present chapters and did not disrupt the flow of the story, just added some light on the character’s reaction and their backstory.

Gil is one of these tortured, flawed, dark yet luminous heroes Pepper has the knack to write. In all the books that I have read by her she has never written a “simple” two-dimensional hero.

At the beginning of the story, we get that he is poor, lives in an abusive house (I won’t call it home) and that school is like a haven for him. He eats his only meal at school, sprays deodorant on his clothes as he can’t wash them every day and stays in his corner. Distant. Friendless. Aloof and closed off with everyone.

He’s always been attracted to Olin, her kindness, her light.

When he’ll be “forced” to accompany her to the bathroom, they will form a close bond. From the first moment on it’s like an invisible cord links these two together. Fight all they want, it will always be present. That attraction. That feeling to be SEEN by the other. Two souls recognizing their mate. 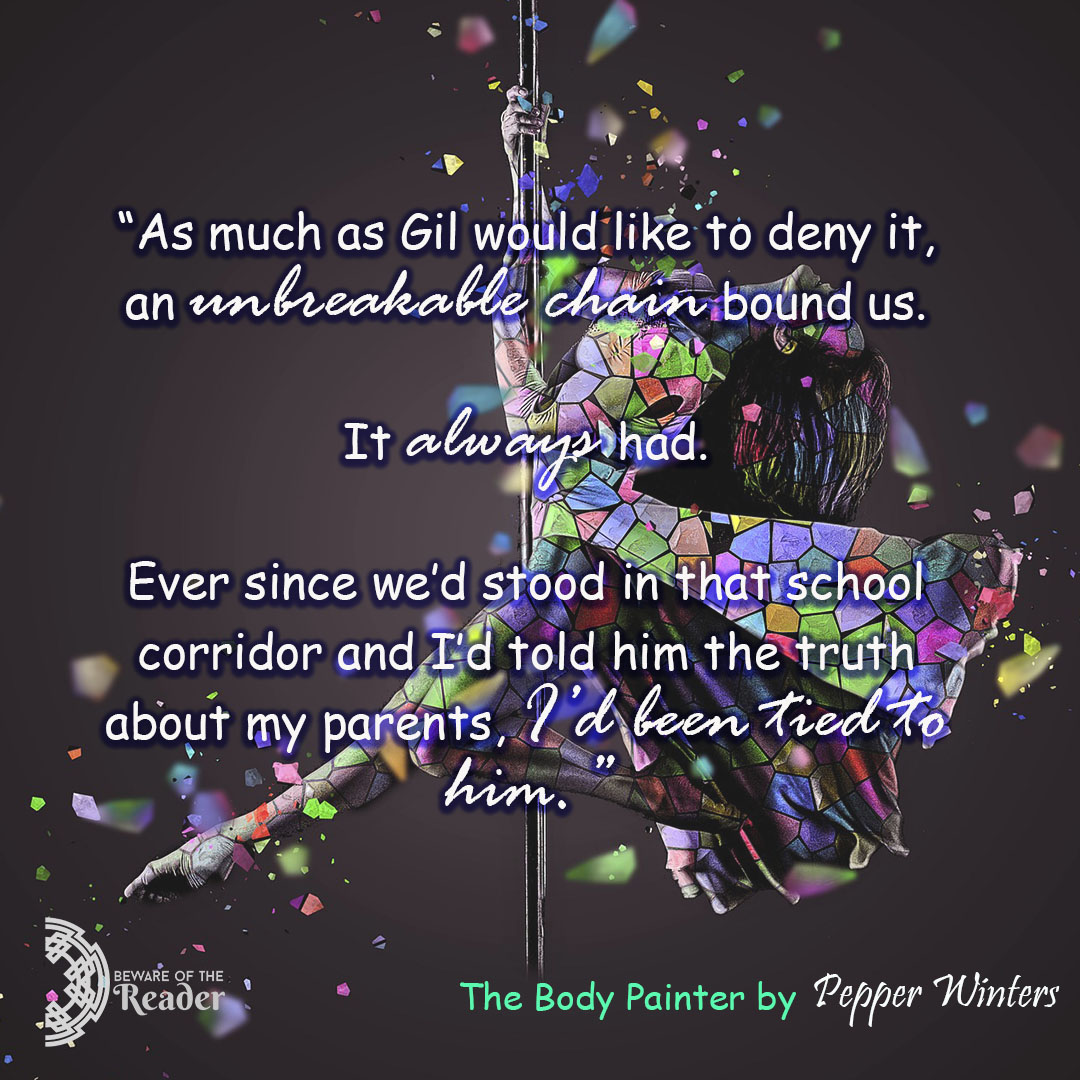 Olin will be hated by some of you.

I want to say it as I know some of my friends don’t like a female character who forgives everything. Who does not seem to put herself before others. Who will always accept from the male character.

I loved Olin. Because I think choosing kindness above meanness, forgiveness above resentment is the strongest thing someone can do.

She will support and help Gil all along. She will see right through his rough exterior. She will find the gentleness, the tender heart below the cold façade.

“But Olin…she shone with sincerity. She made me wonder what it would be like to trust her. To have the luxury of her friendship, knowing she’d have my back because that was who she was. She wasn’t fake. She didn’t protect others for recognition or reward. She helped others because she was good.”

They were together for some blissful months in school until Gil broke up with her. Without any explanation.

“Gil had been the boy I’d wanted to marry. He’d belonged to me like I’d belonged to him. But then he’d become a monster…and no one knew why. “

Years after, in the present of the story, Olin will meet him again by a twist of fate.

Circumstances have changed. Olin is really desperate and went through incredibly hard times. She’s been tested by life in the harshest way. And through it all she survived. Alone.

Because under her kind appearance hides a real will of iron.

All her dreams have been shattered yet she is going on.

Gil… Gil is more tortured than ever. Darker. Hurting. 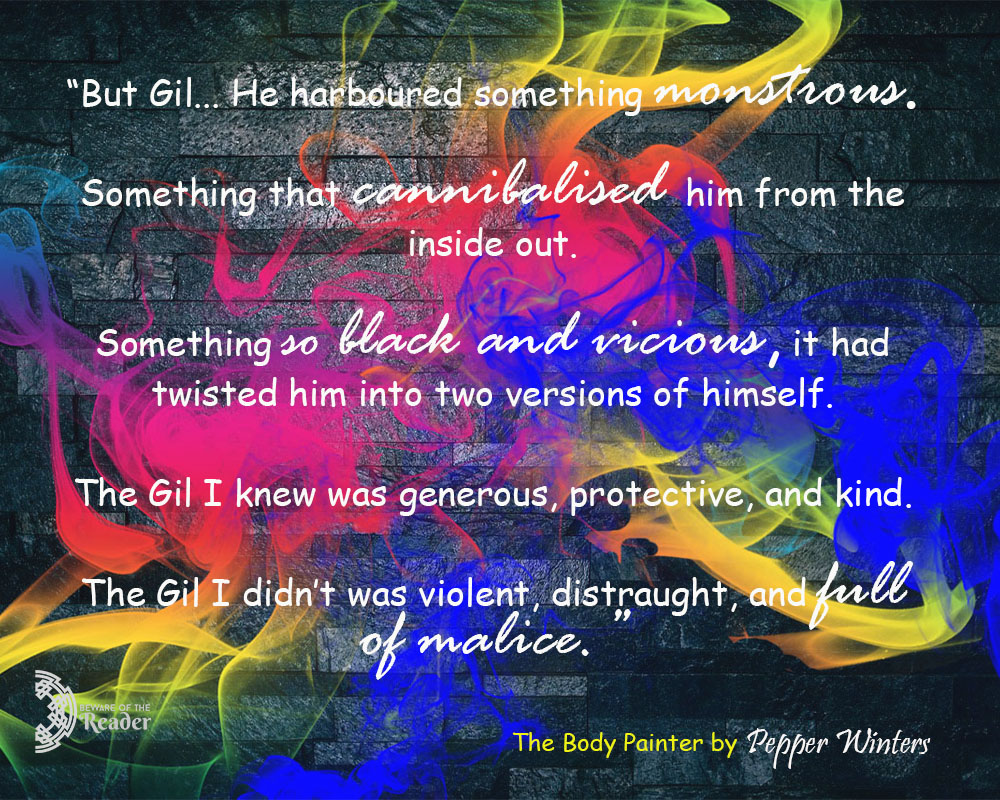 When these two meet again, the attraction is still sizzling.

Countless times Gil will push her away. He will be cold at best, mean at worst.

Yet Olin will come back again and again. Some will call her a fool I call her a knight.

I won’t delve further into the plot. Just know that Gil have secrets weighting him down. He is a haunted man. He’s always protected Olin but at what cost?

Gil is a protector at heart but he is also a lost man.

I guessed his secret or at least part of it as one piece is missing but I think I guessed the missing part too. We’ll see in the next book. 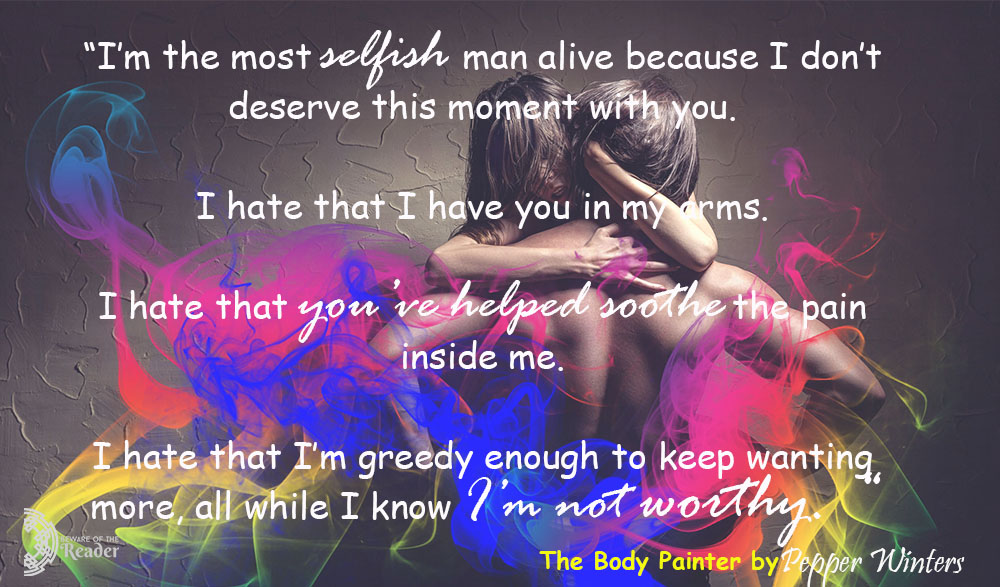 -the secrets, the ordeals, the tortured souls because Pepper writes dark, flawed heroes like none others;

-the complexity of Gil. He should be dark yet he shines. He thinks he is undeserving of Olin’s love. He thinks he deserves all his punishment, all that’s happened to him whereas it’s that unfair life and horrible adults who backed him in that corner. He wants to be kind and make sweet love to Olin but fears he’ll only have brutal sexual intercourse with her;

-the goodness of Olin and her enormous strength. She’s been alone all her life and that’s why when she needs to think, to regroup, when she is lost, she needs to be alone. This was a revelation to me as I recognize so much of me in Olin’s need to be alone to feel at peace when life is harsh. She has been through so many things that would have shattered anyone yet she still walks life with her chin high. Olin was kind, selfless, loving and brave.

Recommend it? Totally if you think you can handle it.