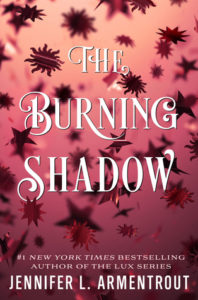 When Evelyn Dasher crossed paths with Luc, she was thrown headfirst into the world of the Lux—only to discover that she was already far more involved in their world than she ever suspected.Because the Luxen aren’t the only ones with a hidden past. There’s a gap in Evie’s memory, lost months of her life and a lingering sense that something happened, something she can’t remember and nobody is willing to tell her. She needs to find out the truth about who she is—and who she was. But every answer she finds only brings up more questions.

Her search for the truth brings her ever closer to Luc, the Origin at the center of it all. He’s powerful, arrogant, inhumanly beautiful, extremely dangerous…and possibly in love with her. But even as Evie falls for him, she can’t help but wonder if his attraction is to her, or to the memory of a girl who no longer exists.

And all the while, a new threat looms: reports of a flu-like, fatal virus that the government insists is being spread by Luxen. A horrifying illness that changes whoever it touches, spreading panic across a country already at its breaking point.

#1 New York Times, USA Today, and internationally bestselling author Jennifer L. Armentrout returns to the world of the Lux with this steamy, shocking second installment of the Origin series that will leave readers reeling.

4,5 WOZA stars
Guys fasten your seatbelt because that book is a real roller coaster. Kind of James Bond with aliens.
You have very big bad guys erasing everyone, special ops team burning houses and shooting people through windows, mysterious virus killing people or transforming them in Terminator machines, identity crisis and… a love story!No time to get boring that’s for sure!Rewind here…
I liked The Darkest Star especially Luc’ s T-Shirts ( I am still ready to buy some of them…hint hint to JLA 😀 ) but it did not amaze me.
I still pre-ordered the Burning Shadow as I love the Luxen world and I wanted to know which path this story would follow.I can now say after three engrossing reading days and several “do not disturb I am reading” flags later that this sequel is a whole other level  of entertainment!
Holy Molly the bomb JLA dropped on us with Nadia/Evie!!! I would never have guessed.In this sequel we follow Evie while she is trying to survive after Micah’s attack and navigate school while her ex friend April is leading an anti Luxen campaign.
A mysterious flu is plaguing humans killing many of them or morphing them into kind of killing zombies with weird black blue blood. Evie witnessed this event first hand and has many questions.
Is it possible, like the government is saying, that it’s a Luxen transmitted desease? But Luxen don’t get sick, do they?
Or is part of an orchestrated anti Luxen propaganda? Because friends the Luxen are the great evils behind any possible pain and misfortune!
I can draw a parallel between what happened to the Jews before and during WWII with what the US government is doing to the Luxen.
Register them, hunt the unregistered ones, strip them of their rights, park them behind fences or take them to places never to be seen again. Fear and idiocy are the most powerful weapons a government can use to legitimate radical actions.
I really appreciated this light JLA shed on her story as History should never be forgotten.What I also loved was Luc’s protectivness towards Evie. Evie will be roughed up or endangered more than once in this sequel and each time Luc will go ballistic. He would kill everyone to protect her!
I also loved the building of the romance, with Luc’s extremely lame pick up lines, silly gifts and unabashed cockyness! It was cheesy and corny in the most endearing way!
These two are two peas in a pod.Evie’s growth was also a big asset  in this story! She had to find who she was. She had no recollection of being Nadia and did not know who Evie was. Did her mom lie to her? Was she worthy of Luc or did he love Nadia but not Evie?
Evie was also the perfect female character with flaws yet badass, uncertain yet so selfless!The pace is fast but not hurried, twists happen all the time to propel the story on a different path and JLA pulled a huge white rabbit out of her hat to have us wondering how in God’s name this story will have a HEA for our main charcaters!
I guess we’ll have to wait for the third book and cross our fingers!

Have you read this story? Or any other Luxen story?