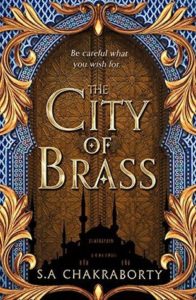 Nahri has never believed in magic. Certainly, she has power; on the streets of 18th century Cairo, she’s a con woman of unsurpassed talent. But she knows better than anyone that the trade she uses to get by—palm readings, zars, healings—are all tricks, sleights of hand, learned skills; a means to the delightful end of swindling Ottoman nobles. But when Nahri accidentally summons an equally sly, darkly mysterious djinn warrior to her side during one of her cons, she’s forced to accept that the magical world she thought only existed in childhood stories is real. For the warrior tells her a new tale: across hot, windswept sands teeming with creatures of fire, and rivers where the mythical marid sleep; past ruins of once-magnificent human metropolises, and mountains where the circling hawks are not what they seem, lies Daevabad, the legendary city of brass, a city to which Nahri is irrevocably bound.

In that city, behind gilded brass walls laced with enchantments, behind the six gates of the six djinn tribes, old resentments are simmering. And when Nahri decides to enter this world, she learns that true power is fierce and brutal. That magic cannot shield her from the dangerous web of court politics. That even the cleverest of schemes can have deadly consequences.

After all, there is a reason they say be careful what you wish for…

OK OK Alexandra and all of you who told me to “just read that book!” were right. This is a fabulous and lush tale filled with political scheming, betrayals, hidden agendas, fabulous and deadly creatures, magic and hot Daeva.

I am still not digesting what happened to “him”!

And if the author does not do something about it in the next book I will come haunt her in her sleep until SA Chakraborti relents and writes something to my convenience!

Now where was I?

First this book was an audiobook of around 19:30 minutes. That’s a lot but it was never boring and the narrator was excellent. I guess that she is from foreign origin (Indian? Persian?) as her pronunciation of all these exotic names was top notch.

There is just one down side to listening to that kind of book: the names! I had no idea how they were written and I can’t guarantee that I’ll write them all correctly. Please don’t hesitate to correct me!

This book is about Nahri as the synopsis is saying.

She has lived alone on the streets for a very long times as she has no memories of her parents. She fled orphanages when she was a small kid as she has special abilities like feeling the illnesses and curing them. Not the best way to be accepted as normal among the other kids and care takers.

To survive Nahri has been forced to become a con artist.

But one day she will summon a “being”, a Daeva named Dara.

She is hunted by Ifrits and will have to flee Cairo with Dara.

Ensue a journey filled with dangers and threats where Nahri and Dara will soon enter Daevabad or The City of Brass.

Daevabad is the city of her ancestors the Nahid (or Naheed?) now all extinct.

From that moment on Dara will be her protector, her Afsheen and Nahri who always dreamt of learning the art of healing will be in charge of the town’s infirmary.

She will be under the “protection“ of king Ghassan and will learn to know his second son, the Kaheed Ali, an excellent warrior and scholar. The first son, Muntadhir is Emir of the town and will one day succeed his father on the throne.

This is the “setting up” of the scene but the book is filled with:

And so much more!

I loved Nahri! She is not flawless, she is determined, stubborn and a survivor. Street smart she will adapt the best she can. She also has a warm personality and her heart will soon beat for a warrior who is far from an angel.

Dara ….sigh, Dara was my favorite just before Ali. He is one of these heroes with a troubled past and many things to atone for. Far from flawless he is …complicated.

He can show contempt for humans yet feel the pull. He can remind people of his past slaughters and regret them the second after. He will protect Nahri with all his heart but will also keep some distance. He will give her some secrets but hide others. He is living without being truly alive.

See? Complicated! But all interesting heroes are!

Ali is also a hero you will fall for as he follows his heart and his beliefs. He is good to his core but is also an incredibly gifted warrior! Devout man, resisting Daevabad’s temptations he will be swayed by other’s misery. Gullible sometimes he will also be torn in his loyalty between his family and that of the Shafits.

The story is rich, complex and we’ve barely scratched the surface as many secrets remain to uncover.

I have no idea how this will unravel in the sequel, I just know that Nahri is in a tight spot and that my favorite characters don’t fare well either!

Now if you’ll excuse me, I will listen to The Kingdom of Copper!

Have you read it? Do you plan to read it?