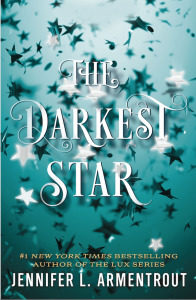 When seventeen-year-old Evie Dasher is caught up in a raid at a notorious club known as one of the few places where humans and the surviving Luxen can mingle freely, she meets Luc, an unnaturally beautiful guy she initially assumes is a Luxen…but he is in fact something much more powerful. Her growing attraction for Luc will lead her deeper and deeper into a world she’d only heard about, a world where everything she thought she knew will be turned on its head…#1 New York Times, USA Today, and internationally bestselling author Jennifer L. Armentrout returns to the universe of the Lux in this brand new series, featuring beloved characters both new and old.

It will be somewhat hard to write the review without giving away any spoiler but let’s try.

The Darkest Star was a quick and gripping read. I postponed chores to finish this book in one day as it was really easy to read, mixing some favorite characters from the old series (Daemon, Luc) and new ones. Jennifer included many twists in the plot and the right amount of mystery as we have a killer on the lose and we don’t know who he or she is.

Evie’s past is also mysterious even if it was not really hard to guess as Jennifer left big clues to have the reader being able to piece it all together.

I also really liked going back to the Luxen world and seeing the world “after” the aliens failed to invade the world. Jennifer brushed a realistic portrait of a world having lived a huge war and having to make peace with some Luxen. In some aspect it reminded me of the post Wolrd War II where the vanquished are excluded and shunned, where trust takes time to build back. Some actions the US government intends to take even reminded me of the pre-WWII with the Jews being contained in ghettos.

Luc was a good male main character, with some charisma even if he is not Daemon (but who could equal Daemon right?). He has an inflated ego, wears nerdy T-Shirt with weird quotes “MUGGLE IN THE STREETS, WIZARD IN THE SHEETS.” Is cool like a cucumber except when Evie’s life is threatened.

We already met him in the Lux series and know that he is an Origin so very powerful. The most powerful of them. 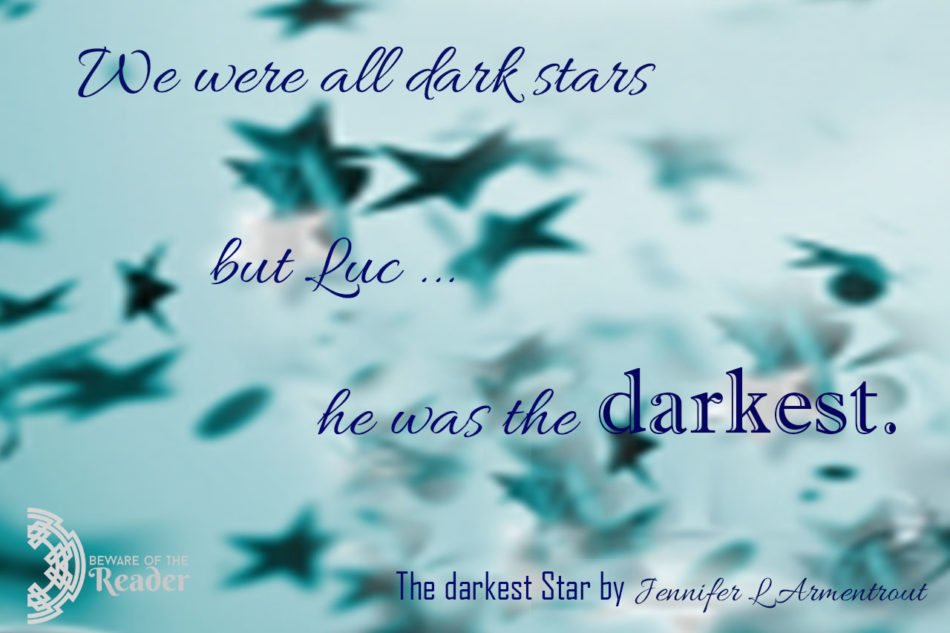 “We were all dark stars, but Luc …he was the darkest”.

Evie was a likable heroine too, easy to relate to.

She lost her father and lives with her mom who works in research. When she follows her friend to a nightclub known to allow Luxen and humans to mix, the night will not go as planned and she’ll meet Luc in unusual circumstances. Evie can hold her ground faced with Luc and she will soon be unwillingly entangled in his dangerous world.

The main interest of the book was to unveil the many secrets surrounding not only Evie but also this new world “after” the war. All is not said as I suspect there is more to Alice than it seems and some character hinted at a huge threat to come.

To sum it up: it was easy to read, entertaining, gripping but something was missing compared to the Lux series for me to give it 5 stars. Maybe it’s the characters who needs more edge? Maybe it’s the drama, present but not extreme? Maybe ….

Recommend it? Of course if you are a fan of the series like I am. I can’t wait for the second book as I need to know what will happen next.

Now let’s talk: have you read the Lux series? Or this one?