I won this little baby in a giveaway with the promise to post a review.

Was Keir a broken hero? Yes. Even Jessica was broken.

Did they make sense together? Hell yes!

But no one can compare to Lachlan and feisty Kayla!!!!! 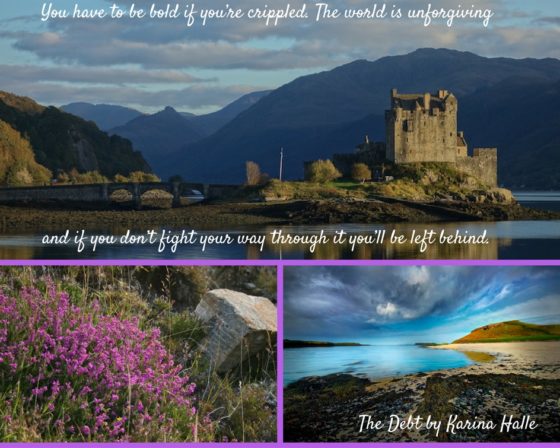 The first chapter was gripping to say the least. What happened to Jessica felt so real! Maybe because we’ve seen so many ugly things happening in the “real life” these last months and I could relate to what she lived… Karina’s writing threw me in Jessica’s head. I was sucked right into the action.

What would you feel if someone was shooting everywhere and looked you right into the eyes saying:

”You see now. They’ll also see now. I was made to do this. To other people who aren’t our people. But it’s all the same, isn’t it? It’s all the same. And now you know.”?

I know I would be terrorized and waiting to die.

Jessica miraculously escaped death that day but she was far from unscathed. More than her physical injuries the PTSD (Post Traumatic Stress Disorder) was really hard to live with. She could not go back to some places without having a panic attack. Every noise sounding like a gunshot threw her into deep fear.

Jessica may be a victim but she’s fed up to be seen like one. She is strong and determined to overcome everything. Very courageous as she’s been attending meetings with other PTSD victims. She faces her fears and goes through very hard physical therapy.

”But I suck it up. I have to. The rest of my life is now just sucking it up. Don’t complain, don’t dwell, don’t be scared, don’t be angry, don’t be sad. Just suck it up and live with it.”

She may be strong but that’s not to say she does not feel lost, adrift with no clue of her future. What will her leg look like once the cast is removed? Will she be able to teach yoga again? Why did she live while others died? She’s not better than them…

When Keir comes into her life she feels alive again even beautiful and not just the crippled woman. He does not see her as a damsel in distress like everyone does.

”I’m not attracted to weak girls with tepid hearts and sheltered minds. I want the woman that will wow me, knock me off my feet, make me come after her over and over again just for another second of her time.”

Keir is a “manly man”, ruggedly handsome and is Lachlan’s cousin.

He’s been looking for Jessica for a long time and when he finds her, he’s overcome by so many feelings his primal goal is somehow forgotten. He’ll pursue her with all his will but he hides a huge secret. He has so many baggage.

What I really loved was reading about Jessica’s determination to look forward.

”It happened. It’s in the past and the past is just a place of reference. Nothing more, nothing less. The real question is what are you going to do going forward.”

She was a fighter more than a survivor. As much as I love broken heroes and rather root for the male character than the female character, she was the real hero for me.

Yes Keir was broken, yes he had PTSD and panic attack, yes he carried a huge guilt, yes he was handsome but … I don’t know what prevented me to really feel his pain, his regrets, his struggle. I was overwhelmed by Lachlan’s feelings in The Play but the magic did not repeat itself.

Now, it does not mean the author did a bad job, far from it as I connected wholeheartedly with Jessica and Karina Halle knows how to write a story.

Sorry Keir, Jessica was the star…

What also worked really well for me was the journey (I won’t say more as I don’t want to spoil your fun) because what Karina wrote is so accurate, be it for victims or for everyone’s life in general:

“Didn’t you know, little red, the journey is the destination.”

The author did also a great job writing about all the trauma and survivor’s guilt victims from tragedy can experience. How they can learn to deal with it and become a new version of themselves.

If you love Karina’s other books revolving around this family of Scottish hotties you should really enjoy this one.

You wan’t a taste? Follow the link below to get a sample on Amazon!