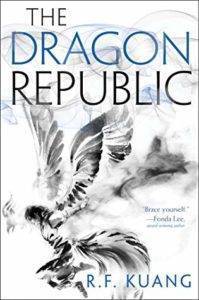 The searing follow-up to 2018’s most celebrated fantasy debut – THE POPPY WAR.In the aftermath of the Third Poppy War, shaman and warrior Rin is on the run: haunted by the atrocity she committed to end the war, addicted to opium, and hiding from the murderous commands of her vengeful god, the fiery Phoenix. Her only reason for living is to get revenge on the traitorous Empress who sold out Nikan to their enemies.With no other options, Rin joins forces with the powerful Dragon Warlord, who has a plan to conquer Nikan, unseat the Empress, and create a new Republic. Rin throws herself into his war. After all, making war is all she knows how to do.

But the Empress is a more powerful foe than she appears, and the Dragon Warlord’s motivations are not as democratic as they seem. The more Rin learns, the more she fears her love for Nikan will drive her away from every ally and lead her to rely more and more on the Phoenix’s deadly power. Because there is nothing she won’t sacrifice for her country and her vengeance.

The sequel to R.F. Kuang’s acclaimed debut THE POPPY WAR, THE DRAGON REPUBLIC combines the history of 20th-century China with a gripping world of gods and monsters, to devastating effect.

I have just finished it this morning and I don’t know if I love it or hate it!

It was so frustrating! Every time Rin made two steps forward she was sent four steps backward! All the betrayals here! The worst is the last one because I had hoped …something to come (not telling more as I don’t want to spoil it for others) but I don’t think they could ever recover from what he did. A line has been drawn in the sand.

But there is no question that RF Kuang is brilliant! That’s just …so difficult to read about your favorite character going through all this! Excruciating really.

Let’s try to put some order in that review without giving too much away. Fair warning: this review will have spoilers for the Poppy War so if you haven’t read it and plan to, pass your way!

The first part of the story was very hard to read.

Rin is in very bad shape as she is deeply grieving Altan and she also has some PTSD after all the horror that she has seen.

What was very difficult for me to read about was her addiction to opium spiraling out of control.

Rin was so traumatized by what happened to Altan and by what she had destroyed that every time she “saw/imagined” Altan she heard him telling her that it should have been her who should have died.

She is now the commander of the Sikes but she does not know how to command them.

She is so convinced that she is useless and worthless that she accumulates bad decision after bad decision. Kind of self-fulfilling prediction.

It was just awful to read!

I deeply love and root for Rin.

I admired the girl who made herself by sheer power of will and lots of hard work in the first book.

Now she was just pathetic.

And I was FURIOUS with RF Kuang to diminish Rin like that. To make her so laughable!

Yet it was the only “believable” choice after all that Rin went through.

Of course she was traumatized! She went through war! She’s seen atrocities and she has committed atrocities too! She has killed and her best friend turned his back on her, disgusted and also terribly shocked.  Of course she grieved! Altan was not only her hero but he was the last one of their kind with her. Like a brother. He was the one everyone spoke of and she was the leftover. Of course she was lost. Filling Altan’s shoes was an impossible task she could never measure up to.

I knew this rationally. But it was not pretty to read.

And I was glad for his harshness toward Rin. His method to reshape her. To help her become whole again. To clean her from all the drugs.

But “my” Rin was barely back that a new punch was delivered to her face sending her once again several feet backward!

I wanted to scream in frustration! This is a true miracle that my phone did not end up crushed against a wall!

Rin will just have to fight in a different way. Because war is the only thing she is good at. At least that’s what she thinks. She also delights in following orders, not giving them. She can’t and does not want to command.

That too felt like a betrayal from RF Kuang because Rin has so much potential! If she could come from ignorant peasant to graduate from Sinegard she should be able to rule and command too right?

And her God the Phoenix is a God relishing violence and destruction. Kind of hard to live in peace indeed!

But Rin is not the only interesting character here and it was really enlightening to see Kitay coming a long way from his resentment. He has known war and has lost his innocence and positive attitude. He too will be very frustrated in this book as he had a task but nobody listened to him with all the consequences that entails. The growth his relationship with Rin is incredible and he will play a major role in this sequel.

We also get to follow Nezha. Haaa Nezha. The enemy become friend. And maybe more?

Nezha hides a secret and this secret will be key in the story. He will save Rin’s life like she saved his. Rin will tremble for him in the heat of the battle but ….

This book is filled with twists and turns. With war and battles. With conflicting emotions. With angst and betrayals. With religious beliefs. With strategy and plans to defeat the armies, to defeat the empress. With the good becoming the bad ones and the bad ones becoming the ones you find excuses for. Nearly every character is written in shades of grey.

RF Kuang writes with maestria and precision, things getting tenser and tenser. I felt like a taut cord ready to break. This is bloody, this is savage, this is horrific. It’s hard it’s true.

This book is simply a roller coaster of emotions that was really really bad for my blood pressure.

That ending was brilliant and frustrating. I am disappointed with the turn some of the tropes took and the choices RF Kuang made even if I must admit that it probably fits the story way better than what I would personally have chosen.

Having read this book I feel exhausted, I too have waged a war. With my wants, my triggers, my hopes and simply with my emotions.

Special mention to the narrator, Emily Woo Zeller, once again brilliant! She is acting the book and makes countless voices, female or male, all distinctive!

Have you read The Poppy War? Or experienced the same love/hate relationship with a book?