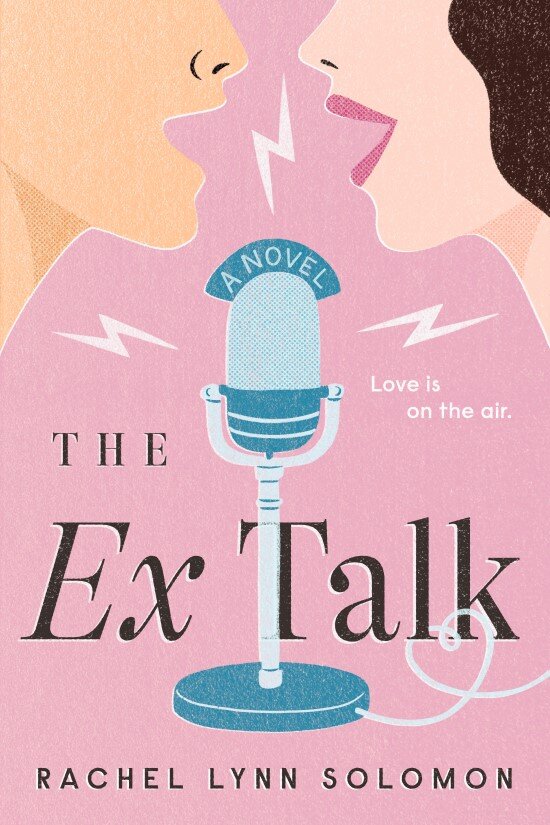 Public radio co-hosts navigate mixed signals in Rachel Lynn Solomon’s sparkling romantic comedy debut.Shay Goldstein has been a producer at her Seattle public radio station for nearly a decade, and she can’t imagine working anywhere else. But lately it’s been a constant clash between her and her newest colleague, Dominic Yun, who’s fresh off a journalism master’s program and convinced he knows everything about public radio.

When the struggling station needs a new concept, Shay proposes a show that her boss green-lights with excitement. On The Ex Talk, two exes will deliver relationship advice live, on air. Their boss decides Shay and Dominic are the perfect co-hosts, given how much they already despise each other. Neither loves the idea of lying to listeners, but it’s this or unemployment. Their audience gets invested fast, and it’s not long before The Ex Talk becomes a must-listen in Seattle and climbs podcast charts.

As the show gets bigger, so does their deception, especially when Shay and Dominic start to fall for each other. In an industry that values truth, getting caught could mean the end of more than just their careers.

Thank you @prhinternational for sending me this copy of The Ex-Talk! #sponsored

I wanted to try Rachel Lynn Solomon’s books for some time now and feel really lucky.

Shay Goldstein has always dreamt on working on the public radio. It held a special place in her heart as she had bonded with her dad while faking being hosts on their radio.

When he died, she was devastated. Years after and you can still feel his absence and her grief. When she was hired to work on Seattle Public Radio and became a producer, she was in heaven!

But when Dominic, a young journalist from grad school arrives at the station and becomes the boss’s favorite, that rubs Shay the wrong way.

As you can guess from the synopsis, the enemies will be forced to work together and they will begin to fall for each other!

The dynamics and chemistry between Shay and Dominic made that story very engaging and it made their relationship grow naturally.

That infuriated Shay and she found him arrogant.

Queue some acerbic banter all while feeling that these two had a great chemistry just waiting to ignite.

When they are propelled by their boss to co-host a show feigning to be ex-lovers, of course their forced proximity will act like a comburant.

Shay has been feeling lonely for a long time now. All her past love relationships ended badly as she was the first to say the “love” word and made her lovers flee.

But she is determined to change her life and not be that clingy girlfriend anymore.

Surprisingly, Dominic, six foot three, was adorably sweet and charming. He too suffered from loneliness. And I loved that he took sex very seriously and could not do casual. It’s refreshing to see this in a guy, compared with the many players we often get in books.

I really liked following their journey and watching them fall deeper and deeper in love.

The only thing that rubbed me wrong was that their collaboration was built on a lie. A lie to the auditors. I know Shay and Dominic felt guilty lying to them but as I am someone who values honesty above everything else, it was difficult to swallow.

This was my first but certainly not my last Rachel Lynn Solomon’s book!