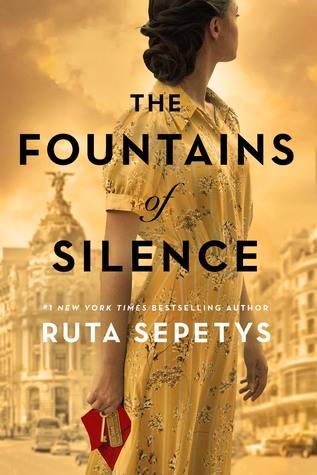 Madrid, 1957. Under the fascist dictatorship of General Francisco Franco, Spain is hiding a dark secret. Meanwhile, tourists and foreign businessmen flood into Spain under the welcoming guise of sunshine and wine. Among them is eighteen-year-old Daniel Matheson, the son of a Texas oil tycoon, who arrives in Madrid with his parents hoping to connect with the country of his mother’s birth through the lens of his camera. Photography–and fate–introduce him to Ana, whose family’s interweaving obstacles reveal the lingering grasp of the Spanish Civil War–as well as chilling definitions of fortune and fear. Daniel’s photographs leave him with uncomfortable questions amidst shadows of danger. He is backed into a corner of decisions to protect those he loves. Lives and hearts collide, revealing an incredibly dark side to the sunny Spanish city.Master storyteller Ruta Sepetys once again shines light into one of history’s darkest corners in this epic, heart-wrenching novel about identity, unforgettable love, repercussions of war, and the hidden violence of silence–inspired by the true post-war struggles of Spain.

I am a late bloomer to the Ruta Sepetys bandwagon. I read or rather listened to “Salt to the Sea” around February this year.
That story moved me so deeply that Ruta instantly became one of the authors I am vowing to follow in every adventure she goes on.

Did the Fountains of Silence live up to my expectation? Totally!

Is it another Salt to the Sea? No even if you can find Ruta’s trademark in her precise and effortless writing; in her use of multiple point of views and in her passion for history.

Ruta has the knack to tell History with a big H through people’s stories. THEY make history.  She has you walking into her character’s shoes and makes you live history like no history book can do.

Once again Ruta centered her story around a particular era of Spain’s history: Franco’s regime. One that was totally overlooked in my classes. One made of tyranny and of silence for the Spaniards. One hiding something that would become a tragedy for many families.

Living in Europe our history classes were thorough on many periods and events. World Wars were analyzed in details but none of Ruta’s topics came to light. Too sensitive. Too painful at that time.

Ruta Sepetys is one of these authors whose writing seems effortless. It is fluid, precise, conveying so many emotions and visuals in few words that none of them seem superfluous but every one is necessary. Her prose is one of the most powerful that I have read. You will find several quotes below as I just want to highlight Ruta’s profound writing.

In The Fountains of Silence, the characters are once again built to perfection. By the end of the book you won’t want to leave them, wanting more. A glimpse of their future. Like getting a postcard with a few news every Christmas. Imagine: “Hi we got married on the coast in that small church overlooking the sea.” “Hi we got our first daughter and she does look like my mother. She is the sweetest baby ever.” “Hi…”.

We follow the lives of Daniel, Ana, Rafa, Fuga, Julia, Puria with Nick and Ben gravitating around them.

As I don’t want to spoil your read I will focus on the characters and the very opening of the book.

The story begins with Rafa.
He is recalling tragic events from the past that cost his parents death. Rafa went through horrible events in his life before getting back to his sisters Julia and Ana. Their parents opposed Franco and in Franco’s regime his opponents died and their children suffered. 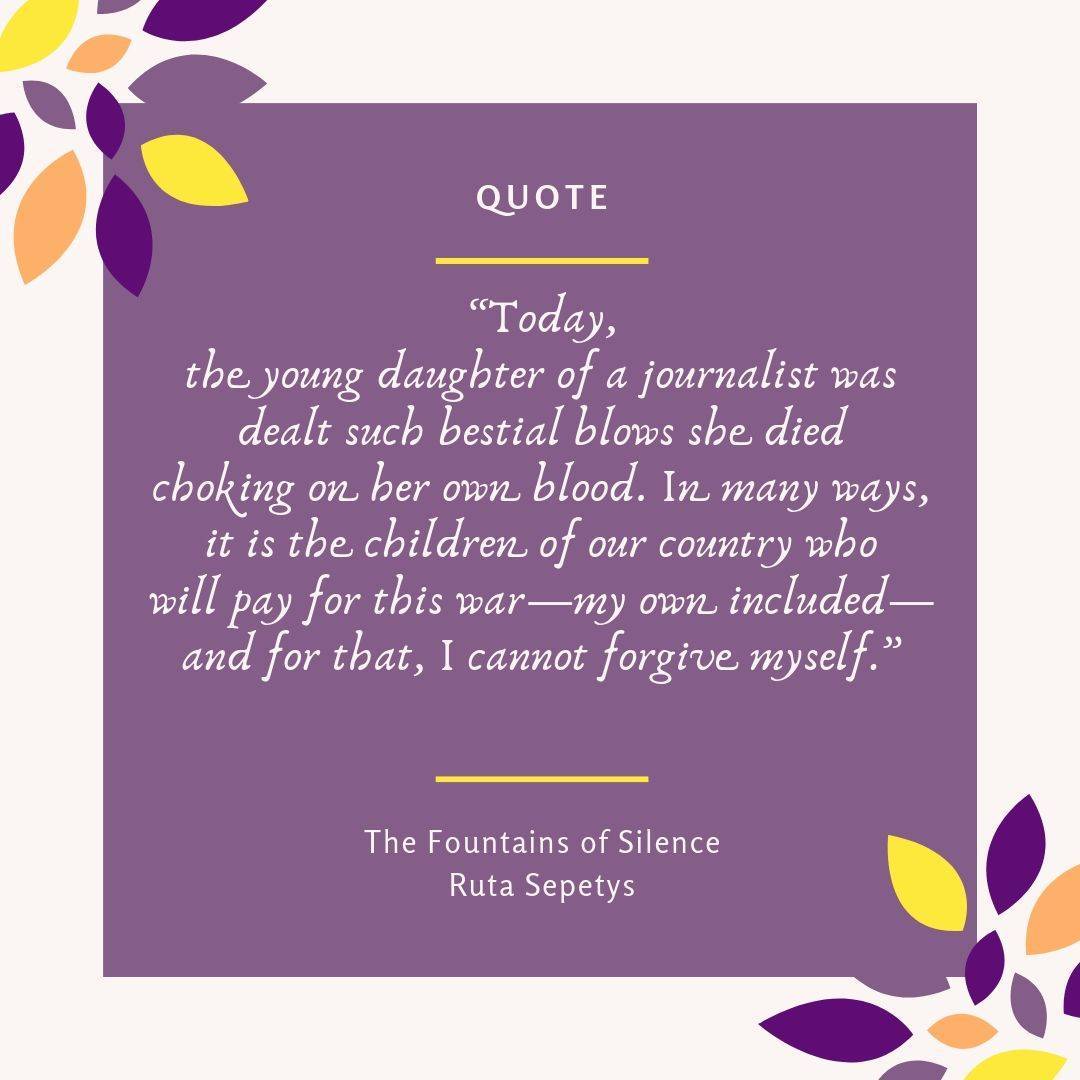 “Today, the young daughter of a journalist was dealt such bestial blows she died choking on her own blood. In many ways, it is the children of our country who will pay for this war—my own included—and for that, I cannot forgive myself.”

Rafa works two jobs and he still is hungry. He is working at a slaughterhouse and a graveyard where he works alongside his fierce and untamed friend Fuga.

Fuga is a character who won’t have many lines in this story but that you won’t forget. He  has presence. Never have I read about a side characters emanating such oneness. Fuga is intense, savage, he is a storm, he is a bull.  What happened to him as a kid is barely hinted at in the book and is horrible. 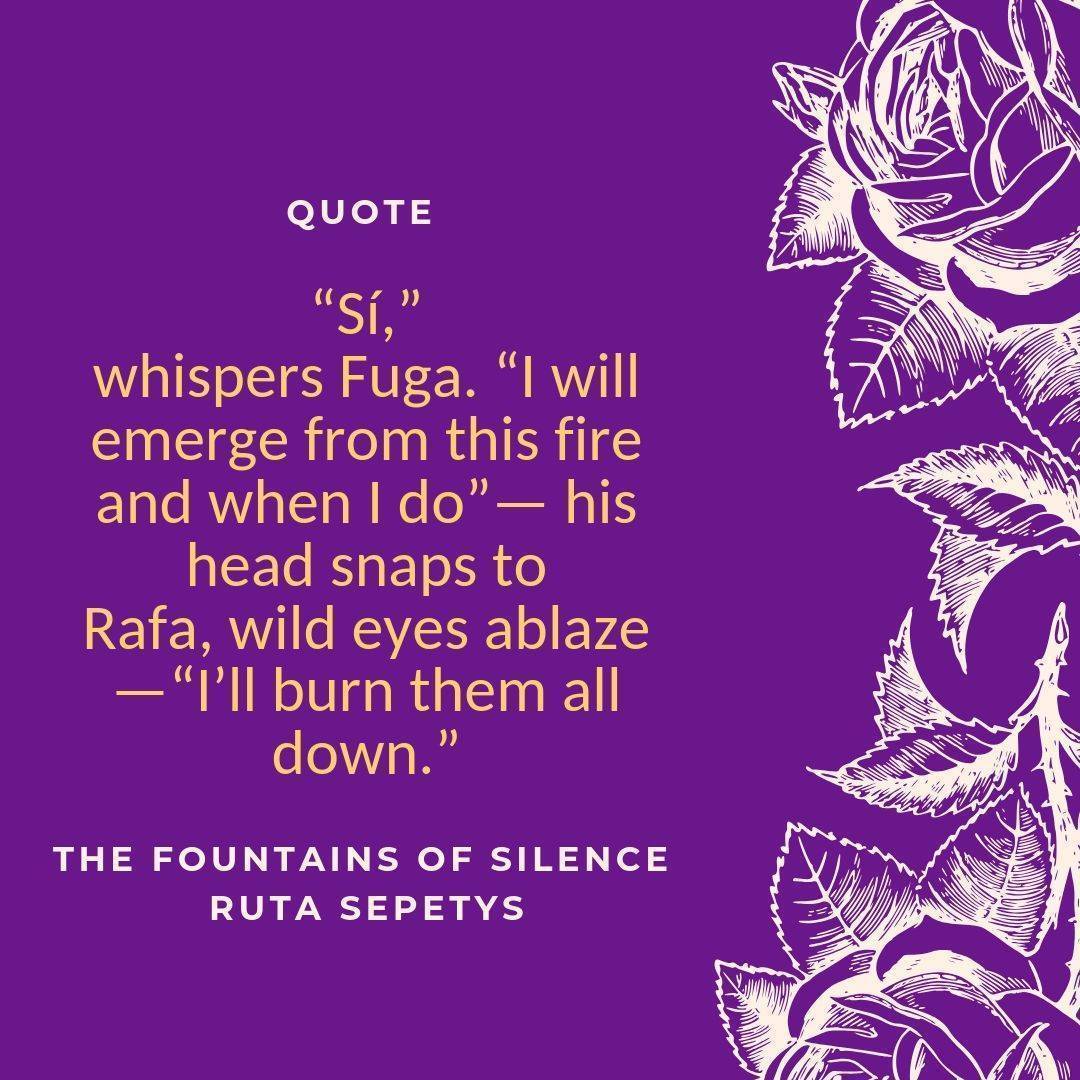 “Sí,” whispers Fuga. “I will emerge from this fire and when I do”— his head snaps to Rafa, wild eyes ablaze—“I’ll burn them all down.”

He dreams of fighting bulls and once he’ll be famous he will avenge and protect all the kids.

“Resurrection is possible, Huérfano. You fight for the forgotten, the abused, the hungry, and the unwanted. You fight for your one and only friend, just as he fights for you.” 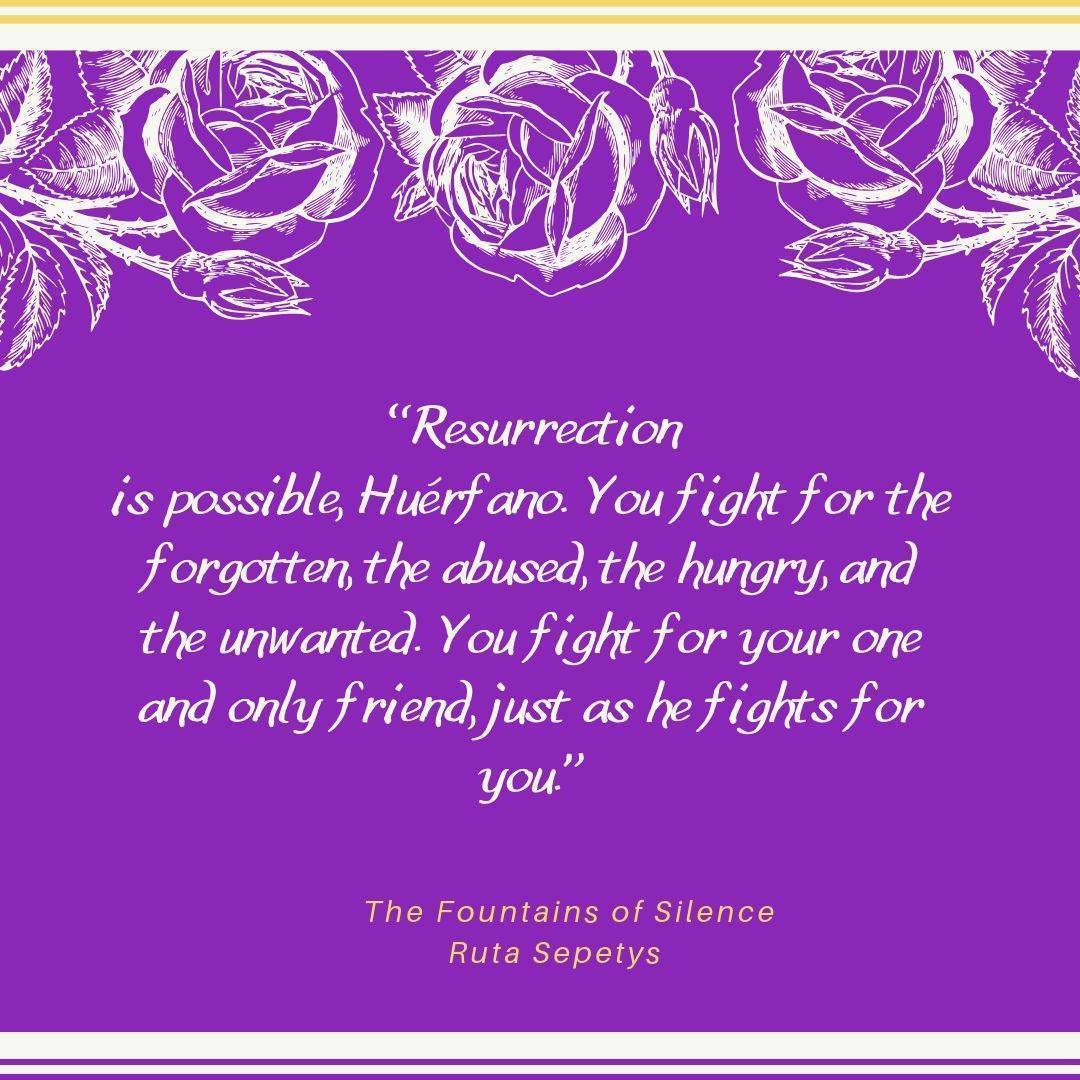 The two main characters of the story are Daniel and Ana.

Daniel is the son of a Texan oil tycoon come to Spain to seal a deal with Franco.
That’s when we learn that Spain needed money and opened its borders to tourists, many of them being American and especially Texan.
Daniel is quintessentially a good guy.
Raised by a Spanish mother he is educated, polite and considerate. His mother did a mighty fine job with her son even if, being from Spain, she never totally fit into Texan’s high society.

“It’s difficult navigating two cultures,” she once told him. “I feel like a bookmark wedged between chapters. I live in America, but I am not born of it. I’m Spanish.”

Daniel dreams of becoming a photo journalist even if his father wants him to join the family company. Dressed in jeans, belt buckle, boots and plaid shirt he is a far cry from high society men always wearing suits. An encounter with Ben, an American journalist will set a chain of events in action. Ben will be his mentor and will offer unique opportunities to Daniel.

“Ben is right. The perfect word is like the perfect camera angle; it expresses the true nature of the situation. Change the camera position slightly and the picture tells tales.”

Daniel chases the truth. Any truth. He will embrace Spain and its secrets like he would a lover. With care, respect and utter dedication. 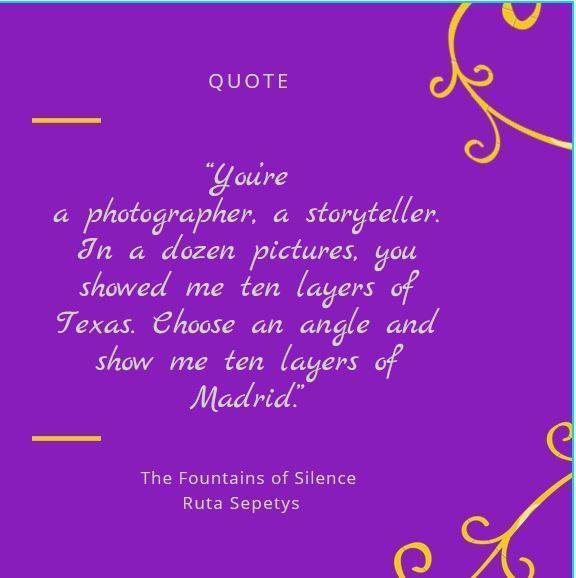 Ana is the hotel maid assigned to his family.
Ana is young, smart, kind, beautiful and hiding a secret. Under Franco’s regime women’s freedom was very restricted. Working at the Hilton is living in a totally different world for Ana. It is a dream world for the young woman who wants nothing more than to travel, escape. Ana and her family will be crucial in Ben’s quest for the true story. The one no one speaks about. But helping Ben is dangerous. It could cost her job, her freedom and maybe her heart.

And Nick and Julia and ….

All their lives will mesh and weave a tapestry of secrets, pain, want and hope. 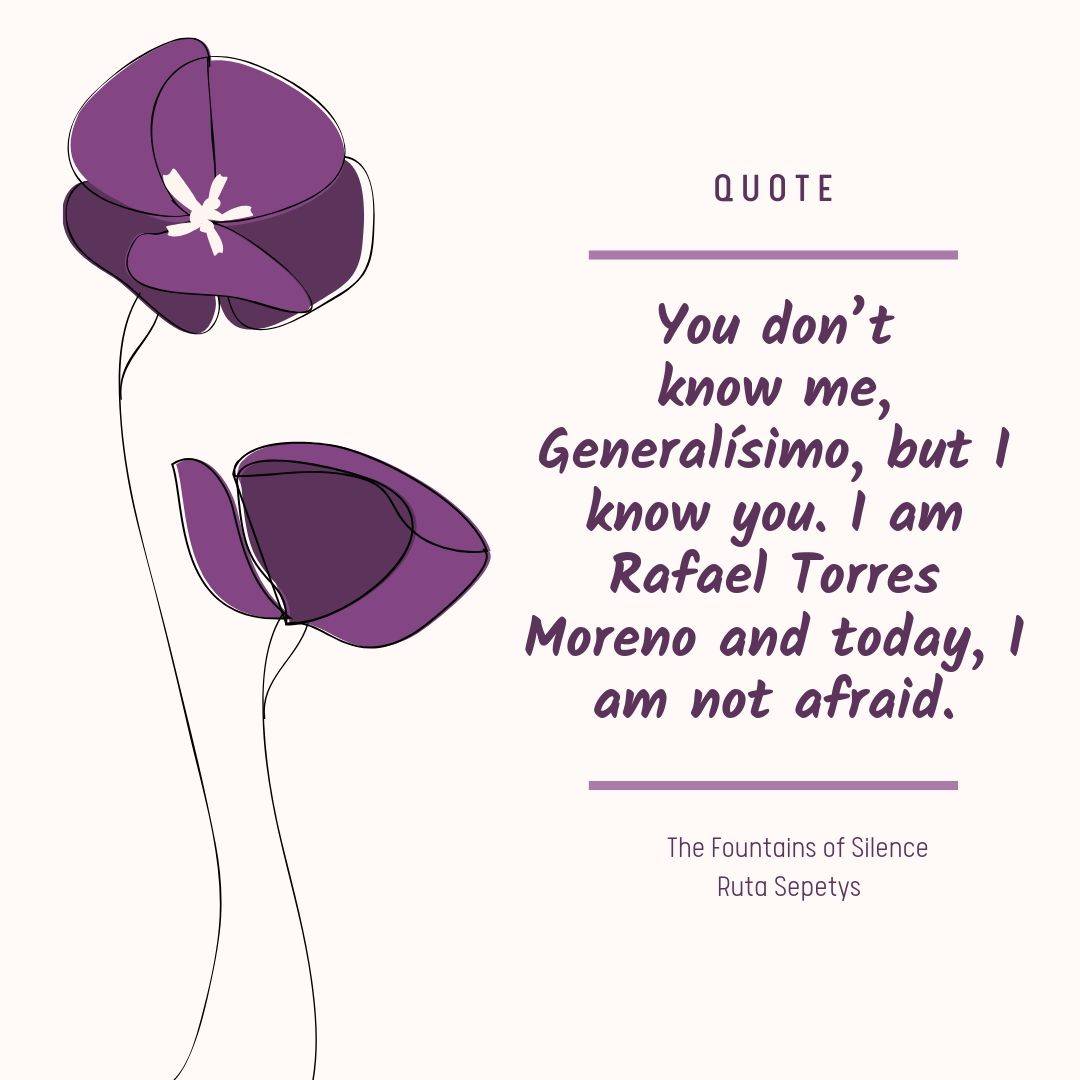 I will stop here as this review is already way too long. That’s what happens when I read a book that opened my eyes and touched me deeply.  Just ….read it!

Last but not least I want to thank Penguin Random House Children for gifting me this copy through Netgalley. I already had preordered the book for months but reading it in advance is a wonderful opportunity! And no it had no influence whatsoever on this very willing and honest review!

Have you read Ruta Sepetys books? Do you love historical fiction? What other historical book would you recommend?