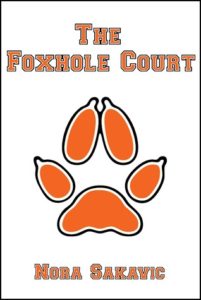 Neil Josten is the newest addition to the Palmetto State University Exy team. He’s short, he’s fast, he’s got a ton of potential—and he’s the runaway son of the murderous crime lord known as The Butcher.Signing a contract with the PSU Foxes is the last thing a guy like Neil should do. The team is high profile and he doesn’t need sports crews broadcasting pictures of his face around the nation. His lies will hold up only so long under this kind of scrutiny and the truth will get him killed.

But Neil’s not the only one with secrets on the team. One of Neil’s new teammates is a friend from his old life, and Neil can’t walk away from him a second time. Neil has survived the last eight years by running. Maybe he’s finally found someone and something worth fighting for.

OK so I had no intention to ever read this series. I didn’t even know it existed before being on Instagram. Then…I saw so many of my friends gushing about it that I was intrigued. The day the first book was free on Kindle, I bought it. And …I read it in one day!

I don’t know what I can add from all the reviews but I’ll write my piece nonetheless.

It was not what I imagined at all because I had not even read the synopsis nor reviews!

Going into this series without expectations I got in book one a band of screwed teenagers, some really crazy psychotics but gifted for Exi, that imaginary sport. A coach that I guess had an abusive childhood gathered these rejects and made them into a team.

At the beginning of this story, they have too strong personalities to really play united like a team and that will cost them. Things will improve by the end.

Don’t expect romance because you’ll have none in book one! But we get what is probably the beginning of something and if my guess is right it will be very intense and interesting!

We follow our main character, Neil, who’s been on the run for years, evading a very deadly and complicated situation with his father.

“Neil should be used to this by now. He’d spent the last eight years on the run, spinning lie after lie to leave a twisted trail behind him. Twenty-two names stood between him and the truth, and he knew what would happen.”

Neil crushed my heart as he is tired of being alone and on the run. So alone! So, even if it would probably mean his death, her could not resist the Exi’s appeal and joined the Foxes. Because he could not help but hope that it would be possible. To play. To stop running, even for a little while.

“This last year, without his mother at his side, it meant being completely alone and adrift. He didn’t know if he was ready for that.”

The Foxcourt is really made of unstable young men and women. Their goalie is the craziest of all!

“Andrew Minyard didn’t look like much in person, blonde and five feet even, but Neil knew better. Andrew was the Foxes’ freshman goalkeeper and their deadliest investment.”

Andrew is the most interesting character so far.

He is batsh!t crazy, violent, obsessive, possessive and unstable!

But he will do everything to protect Kevin, the star player, now member of the Foxcourt after fleeing his abusive family.

Oh yes I forgot to add that to complicate things, you’ll get the American and Japan mafia added to the mix! They of course want to mess with some of the players, Kevin in particular.

I won’t name all the Foxcourt players as I intend to write a complete review for the series. Just know that Neil had to pass Andrew’s violent hazing. Once that Neil stopped trying to hide but let his true personality shine and defend his team mate, it was … liberating.

“Remember this feeling. This is the moment you stop being the rabbit.”

Recommend it? If you love books with sport, ragtag crew members, treating topics of abuse, mafia, violence, drugs and madness with a highly addictive potential then yes!

Have you read that series? What did you think of it?