Mostly character driven story with maybe a somewhat expected plot it’s been wonderfuly executed and gave me all the feels and emotions I so love and expect from YA stories. 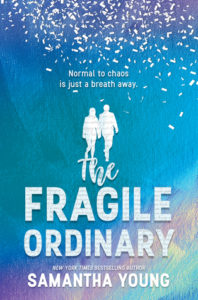 I am Comet Caldwell.And I sort of, kind of, absolutely hate my name.

People expect extraordinary things from a girl named Comet. That she’ll be effortlessly cool and light up a room the way a comet blazes across the sky.

But from the shyness that makes her book-character friends more appealing than real people to the parents whose indifference hurts more than an open wound, Comet has never wanted to be the center of attention. She can’t wait to graduate from her high school in Edinburgh, Scotland, where the only place she ever feels truly herself is on her anonymous poetry blog. But surely that will change once she leaves to attend university somewhere far, far away.

When new student Tobias King blazes in from America and shakes up the school, Comet thinks she’s got the bad boy figured out. Until they’re thrown together for a class assignment and begin to form an unlikely connection. Everything shifts in Comet’s ordinary world. Tobias has a dark past and runs with a tough crowd—and none of them are happy about his interest in Comet. Targeted by bullies and thrown into the spotlight, Comet and Tobias can go their separate ways…or take a risk on something extraordinary.

It’s been months since I skipped a whole blogging day just to read but that’s what happened here!

You know the feeling when after some sentences you just know that a book was made for you? Well that’s what happened to me with The Fragile Ordinary.

It is because I felt a deep soul bond with Comet. She was me at a younger age. And she is Samantha Young as a teenager too based on the acknowledgment. 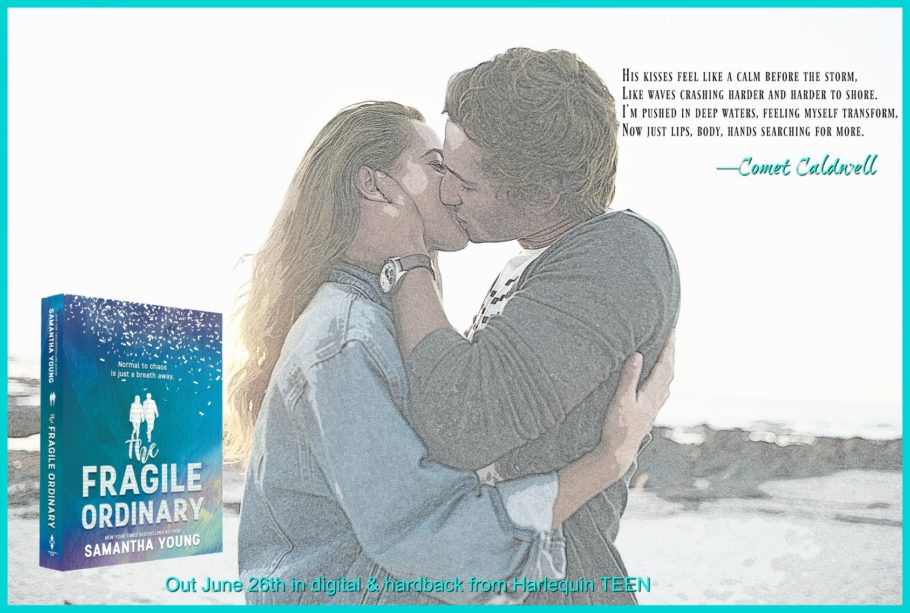 Comet is a writer and a dreamer.

She experiences the world through books. Rather staying home reading about a rakish duke ravishing a maiden than going to a party filled with drunk college boys with wandering hands! Does it ring a bell? Yes? Well congratulations you are a proud bookworm!

Comet is endearing. She is shy and filled with insecurities yet promised to always be true to herself. She displays her difference in her bold clothing choices. All retro but cute and colorful.
But this is where her courage ends.
She is gifted and lovely yet prefers remaining in the shadows. Behind her two BFF.

Comet also has a very disfunctional family. Her parents are master of abuse by neglect.
You will hate her parents.or at least resent them.

This story is filled to the brim with high school YA topics: bullying, drug problems, mental abuse, grief and growing up finding your true self. Daring show your inner world to others.

You will have the BFF: some days they stick other days you fight but in the long run they are Comet’s constant.

Growing up and being a teenager is a hard business we all went through the best we could and that’s what the book is about.

Comet had to dare. She had to trust herself to become the one she was meant to be.

Of course she’ll be helped by a boy.
There is always a boy. Or a girl. A love interest.
The one who will look at you as if you hang the moon and it will give you wings.
Because if someone finds you loveable surely you must be worth it right?

Tobias is your typical YA hero aka
-new guy (Yank)
_hot very hot
-bad boyish but not too much. Just with the wild crowd;
-instantly popular;
-smart;
-kind.

Tobias will help Comet to come out of her shell and she’ll help him grieve the proper way, go back on the right path.

This story should be dedicated to all the Comets of the world. They are not some dull passing ball of dust but shiny jewels in the being.

Mostly character driven story with maybe a somewhat expected plot it’s been wonderfuly executed and gave me all the feels and emotions I so love and expect from YA stories.

Have you read Samantha Young’s books?