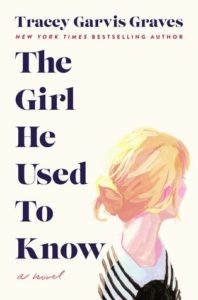 What if you had a second chance at first love?Annika Rose likes being alone.
She feels lost in social situations, saying the wrong thing or acting the wrong way. She just can’t read people. She prefers the quiet solitude of books or playing chess to being around others. Apart from Jonathan. She liked being around him, but she hasn’t seen him for ten years. Until now that is. And she’s not sure he’ll want to see her again after what happened all those years ago.

Annika Rose likes being alone.
Except that, actually, she doesn’t like being alone at all.

The Girl He Used to Know is an uplifting novel full of surprising revelations that keep you turning the page. Perfect for fans of Jojo Moyes, Gail Honeyman, Jill Santopolo and Sliding Doors

“It’s like everyone around you has a copy of the script of life, but no one gave it to you so you have to go in blind and hope you can muddle your way through. And you’ll be wrong most of the time.”

I am late to the Tracey Garvis Graves bandwagon I know!

I confess that what drew me to this story was its cover in the first place. Then all the positive reviews my friends wrote about it. Then the sample on Audible was the last push I needed to give this book a chance.

I was immediately won over by Kathleen McInerney’s voice. It fitted Onica’s sweet and shy character perfectly. Fred Berman’s narration on the other hand never convinced me. Most of the time I was under the impression he was reading a grocery list! I warmed up to his voice late in the book but was happy he did not have as many chapters as Kathleen.

The Girl He Used To Know is a deeply moving story about a girl who is not like everyone but did her best all her life to fit in.

It broke my heart so many times to listen to the bullying and unkindness Onica had been victim of because there never has been a sweeter female character. Onica reminded me of a fluffy kitten. Someone you just wanted to protect and hug.

I think Tracey Garvis Graves did an impressive job portraying all the ordeals someone suffering from autisme yet being highly functioning could encounter all his life.

“I never know what people are thinking. It’s like visiting a country where you don’t speak the language and you’re trying so hard to understand but no matter how many times you ask for juice, they keep bringing you milk. And I hate it.”

We alternate between past and present chapters, present being 2001.

Between Onica’s first year at the university of Illinois when she felt so lost at the beginning of the year, being unplucked from her family’s cocoon for the first time in years and Onica’s life as a librarian, when she meets Jonathan for the second time.

Onica is a smart, sweet and extremely shy young woman.

From the very beginning we guess that she must suffer from some form of autisme or social anxiety. It is never stated plainly because Onica just wanted Jonathan to see her as a girl and not as a “case” but it shone though so many situations.

I was so impressed by Tracey’s dedication to make us “feel”, to show rather than tell what being autistic was in the many small details about Onica’s life. Her low tolerance to noises (too many stimuli), her inability to read other’s emotion while looking at their faces, her coping mechanisme to avoid difficult situations and flee just to sleep it over. Onica’s love for chess that created a bubble of silence and helped her focus. Her inabilty to remember some trivial things and all the keys, phones, etc that she lost.

With Onica you got what you saw. No lies, no manipulation, no games.

She was loving, selfless, kind and so afraid to hurt people when doing or telling the wrong thing.

She was also highly stressed when put in an unusual situation and resorted to mimicking other people to blend in.

“I try so hard to fit in. I spend hours studying appropriate behaviors.” She makes little air quotes around the last two words. “I will never get it right! Do you know what that’s like? It’s the most frustrating thing in the world.”

She was beautiful outside and inside.

That’s why I loved Jonathan so much!

He was very protective of Onica. Most important: he was never ashamed of her! He never wanted her to change. Every thing she gave him emotionally, every baby step she was able to make in their relationship he took it as a priceless gift.

If I did not like the narrator this did not deter me from falling in love with Johnathan.

Not for me but for Onica.

Sometimes I want to steal the male MC and keep him for me but here, Onica was such a radiant soul that I wanted her to be happy. If I could have I would have pushed Jonathan in her arms!

Their love story was beautiful but something happened.

That’s why this is a second chance romance.

Tracey Garvis Graves broke my heart. Several times in the book. Toying with my hope. Lifting me up just to let me plummet to the ground. But that’s life and life is not a bed of roses.

We learn from our mistakes. We grow and become stronger.

And that’s exactly what happened with Onica!

I would warmly recommend this story for lovers of beautifully written romance who are looking for a sensitive portrait of a different young woman brushed in delicate strokes.

Have you read it? Or any of her books?