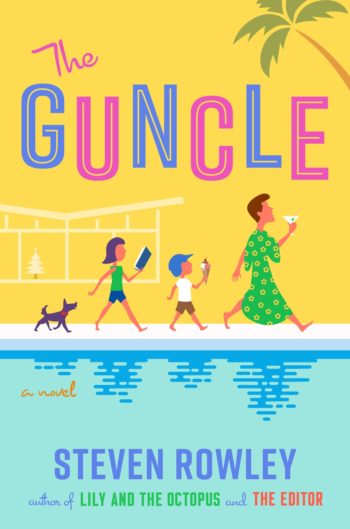 From the bestselling author of Lily and the Octopus and The Editor comes a warm and deeply funny novel about a once-famous gay sitcom star whose unexpected family tragedy leaves him with his niece and nephew for the summer.Patrick, or Gay Uncle Patrick (GUP, for short), has always loved his niece, Maisie, and nephew, Grant. That is, he loves spending time with them when they come out to Palm Springs for weeklong visits, or when he heads home to Connecticut for the holidays. But in terms of caretaking and relating to two children, no matter how adorable, Patrick is honestly a bit out of his league.

So when tragedy strikes and Maisie and Grant lose their mother and Patrick’s brother has a health crisis of his own, Patrick finds himself suddenly taking on the role of primary guardian. Despite having a set of “Guncle Rules” ready to go, Patrick has no idea what to expect, having spent years barely holding on after the loss of his great love, a somewhat-stalled career, and a lifestyle not-so-suited to a six- and a nine-year-old. Quickly realizing that parenting—even if temporary—isn’t solved with treats and jokes, Patrick’s eyes are opened to a new sense of responsibility, and the realization that, sometimes, even being larger than life means you’re unfailingly human.

With the humor and heart we’ve come to expect from bestselling author Steven Rowley, The Guncle is a moving tribute to the power of love, patience, and family in even the most trying of times.

This is when the saying “don’t judge a book by its cover” is really appropriate!

If you look at that cover, it looks like a beach read, all sunshine and bright colors.

And it is indeed filled with sunshine.

Beneath that popsicle veneer lies a deep and moving story revolving around grief.

How grief hit everyone in a different way. Some cope with pills or alcohol to numb the pain, even before death happens.

Others wallow in grief for years because they have unresolved issues, because they were not allowed to say goodbye. They were robbed of goodbyes.

And others, like the kids, don’t measure fully what they lost. Or don’t know how to express their feelings.

The Guncle is Patrick, the Gay Uncle Patrick or GUP.

He is a maybe retired movie star, holed in Palm Springs desert and living alone in his huge villa and big pool. It’s been years since he’s seen his family in New York.

He was always the one to travel to see them until he got fed up with it.

Years ago, he lost the man of his life, Joe and he has never recovered. In fact, it’s easier to hide in the desert than dare to live under the spotlight.

But when his brother calls because Sarah, his wife and Patrick’s best friend just died from a long illness he won’t hesitate to jump into a plane.

Patrick never expected to be the guardian of his nephew and niece Grant and Maisie, six and nine years old while their father will deal with health problems for three months.

After protesting vigorously he’ll go back home with the kids, determined to help them cope with their grief.

Follow many days filled with fun, laughter, emotions, sadness while it seems that not only will Patrick help the kids but they’ll help him too.

I loved reading about Patrick, his quirks and struggle. His “Guncle rules” were equally funny and full of wisdom. He truly encouraged the kids to be who they wanted to be. This was certainly an ode at acceptance. Be whomever you want, you are perfect.

Maisie and Grant soldiered on and rallied after their uncle all while steering him where they wanted him to go aka Youtube!

Patrick’s neighbors, the throuple added an interesting layer to the story. It was one more plea to live your life like you want and not to please others.

I laughed but I also cried a lot. Because this sent me back to my own grief, the one I experienced more than two and a half years ago. The one I thought I had overcome until it made a come-back with this story.

That book is joyful, colorful, kind, snarky and moving. Much more than a simple beach read.