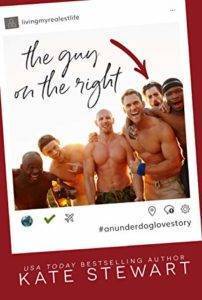 I‘ve spent most of my life answering to Teddy, because I couldn’t make Theo work.

Except for here. College. The place where all bets are off, and I’ve managed to redeem myself.
There’s only one problem, my new roommate, Troy, is football royalty and looks like he stepped off the set of an Abercrombie shoot.

Doesn’t matter, I cook a mean breakfast for his panty parade, and we get along well.
And anyway, this year I got the girl. And she’s perfect.

That is, until Troy takes a good look at her.

I may not know much about play strategy, but I’ve been the good guy my whole life. I’ve been listening and I know exactly what women want. Framed in a picture standing next to me, Troy may seem like Mr. Perfect, but he’s underestimating the guy on the right.

Spoiler alert: In this story, the underdog is going to win.

You know how some meme ask you what are your random thoughts during an experience?
Well here are mine in reading order:

– That Theo is pretty common. He even is a little annoying with all his thoughts about how Troy and other guys have it easy and how he, Theodore, has to do breakfast for their one night conquests.

– Laney is all over the place! She can be funny but she is a little too much and overdone.

-25% in the book and I still can’t fall into it! Their  experience seem so fake and I just don’t feel that story. What will I write as a review???? I love Kate’s books and I love underdogs but this just feel forced… WHAT HAVE I DONE ASKING THIS ARC???

– past 45 % I DON’T WANT TO STOP
! This is so surprising! And Theo is not at all who I thought he was. And Laney is not just a firecracker she in fact has a golden heart too!!!

If I had to pitch this book (which is exactly what I am doing ..) I would say that this story has layers that need to be peeled to get to its real golden core. Exactly like Theo has many many layers hiding his real fantastic and amazing personality.

I had to work (read) to get to hold the Holy Grail in my reader’s hands. But like most quests it was so WORTH IT!

Now that I have hit you with a bunch of thoughts let’s try to give some structure and meat to this story.

Theodore Houseman as in ( named after his mom’s favorite chipmunk!) is a student member of a band. Not a rock band like I had believed in the beginning but a marching band.
You know the ones you see on the field playing along the athletes …
Yes that kind of band.
But that’s not a boring band and I’ll leave it at that as I don’t want to spoil your fun. You’ll see…

Theo is not ugly. He even cleans up well but he is not the one blinding you with his beauty. You have to give a second look.
Of average height he pales in comparison with his roommates all tall and muscled athletes.

Theo is a virgin. He is waiting for ” the one”.
When his roommates have different girls every night Theo is the one consoling them in the morning when they have their walk of shame.

Theo is the guy you overlook all the time, eclipsed by his friends.

But Theo hides real treasures. Theo is full of surprises. Theo had me fooled like the rest of them and when I discovered everything step by step I could not believe I had been so blind!

When Theo meets Laney they have a drunken heart to heart. This will create a connection and they soon will see each other often.

Laney is a spitfire.
As Theo said she brings light in every room she walks in.
That girl can also test your patience! Don’t ever go shopping with her she can’t make a decision!
Raised by her mom and gran Laney is a moving heroine, strong and beautiful.
She has a best friend Devin and an enemy named Gina… As in her va-Gina who makes her fall for pretty guys who are proving being shallow men not worth her time. She has sworn of men when Theo meets her.

They will soon become best friends even is Theo feels frustrated that he has been friend zoned pretty early on.

I loved so many things about this one!
Their friendship and the brand of crazy Laney brought with her had me smiling or laughing so many times. My laughing moments were always laced with fondness as they were so adorable together.
It was a really perfect slow burn romance when the feelings deepen and grow in a totally natural and believable way.

You have laughter, you have swoon moments, you have surprises and you have hawtness because Theo has a game ladies!

It was a fantastic story where I was totally fooled and overlooked the underdog for a long time. You blind me Kate!!

Have you read this book? What’s your favorite romcom?