Link to Amazon and sampler 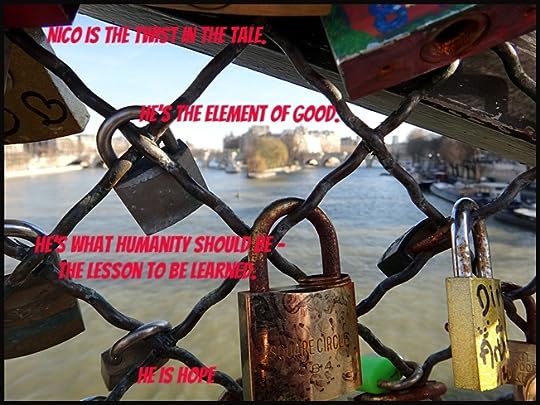 This book is about so many things it’s amazing how the author treated them all without being just too much but rather flowing so effortlessly one into another.

It’s about football of course but it’s also about family and prejudice. It’s about making errors and learning from them, mending your soul, going past your jealousy and insecurities to become a bigger man. It’s about kicking back when you’ve been hit by hard blows life can deliver be it an accident, a grief, losing your career. It’s about love and hope too.

This is the story of Reagan Prescott and of Nico Medina, the story of their family and all the people living on other sides of the track.

Raegan is coach’s daughter. Real nerd she is quiet, goal driven. She loves filming, prefers observing through the lens, hidden and safe behind her camera. ”I want my camera. I want the safety of living this part through the lens. I don’t want to be a part of the story, but I am. I’m a part of Nico’s story. And he’s a part of mine. I believe in him.”

Nico is from the other side of town, the scholarship boy. He’s smart, goal driven, caring incredibly fast and gifted with a ball. He’s always tried to escape his bad neighborhood, evade the drug dealers, run faster and faster. ”The video remains paused in mi lap, and the boy on the screen walks away from me in real life, never once looking back. I watch it again when he’s out of sight. I watch it through his eyes, and after the fifth time, I finally see it. Nico doesn’t want to get caught.”

This book made me experience maybe all emotions conceivable:

-Joy, so many times, when I read about Alyssa cheering in her own childish way with pom-poms Izzy gave her or playing in the water.

-Nervousness as I was a bundle of nerves reading about the games, truly living them like I was sitting on the sideline. I was as filled with energy and want to exterminate the other team as The Tradition players were. Coach’s speeches were like a direct shot of caffeine to a starved coffee addict. The way he readied his boys for the game made me think of armies preparing for battle. Raegan’s dad filled them with pride, they were out for blood and his word was sacred. How I wanted these boys to win!

-Elation. I wanted to shout a resounding “Yessss!”, exulting when Nico got his chance to play for The Tradition or when he scored some incredible and unbelievable shot.

-Disappointment as I witnessed Raegan’s family slowly falling apart, caving under pressure but not knowing how to fix it. ”That’s what we do with problems in the Prescott family – we cover them up in happy paint, put on sunshine smiles and pretend everything is fine.”

-Sadness. I bawled my eyes out when drama hit the Medina family.

-Fear as I lost ten years of my life when I thought it would be even more terrible, that everything would be lost in a cruel twist of fate.

-I melt in a puddle of goo when Nico romanced his girl with flowers got the best chariot he could afford to take her to school. I dare you not to love him as above all his qualities he also is good through and through, protective of his family and he knows how to properly romance a girl. ”Just don’t ever stop looking at me. Look at me like you expect more. Look at me like it isn’t going to be easy. Make me earn it. I’ll earn it. I’ll never stop trying to earn it … to earn you.”

This story made me think about all the prejudice we can entertain against others because we don’t know them, sometimes we don’t even want to know them and live in our own bubble with our biased view about life.

But above everything else, what I loved most in this book is the writing. Silent confrontations, a chest rising with tiny breaths, the quirk of a brow, the slant of an eye, a foot ready to kick the ball… the storytelling was compelling and reminded me of the slow motions used in films and it was a fitting analogy for Raegan’s passion. There was so much in what was left unsaid. It was really clever and the author changed gear as once the scene was set, the relationship evolved into friendship/love territory. By that point the pace changed becoming faster, throwing us in the action.

I can’t recommend this book enough and not only to YA fans.