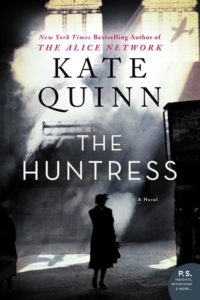 From the author of the New York Times and USA Today bestselling novel, The Alice Network, comes another fascinating historical novel about a battle-haunted English journalist and a Russian female bomber pilot who join forces to track the Huntress, a Nazi war criminal gone to ground in America.In the aftermath of war, the hunter becomes the hunted…

Bold, reckless Nina Markova grows up on the icy edge of Soviet Russia, dreaming of flight and fearing nothing. When the tide of war sweeps over her homeland, she gambles everything to join the infamous Night Witches, an all-female night bomber regiment wreaking havoc on Hitler’s eastern front. But when she is downed behind enemy lines and thrown across the path of a lethal Nazi murderess known as the Huntress, Nina must use all her wits to survive.

British war correspondent Ian Graham has witnessed the horrors of war from Omaha Beach to the Nuremberg Trials. He abandons journalism after the war to become a Nazi hunter, yet one target eludes him: the Huntress. Fierce, disciplined Ian must join forces with brazen, cocksure Nina, the only witness to escape the Huntress alive. But a shared secret could derail their mission, unless Ian and Nina force themselves to confront it.

Seventeen-year-old Jordan McBride grows up in post WWII Boston, determined despite family opposition to become a photographer. At first delighted when her long-widowed father brings home a fiancée, Jordan grows increasingly disquieted by the soft-spoken German widow who seems to be hiding something. Armed only with her camera and her wits, Jordan delves into her new stepmother’s past and slowly realizes there are mysteries buried deep in her family. But Jordan’s search for the truth may threaten all she holds dear.

“Because we can keep on. Others, they try keeping on, they just…” she mimed an explosion. “It’s too much for them. They come to pieces. Not us. Hunters, they are different. We can’t stop. Not for bad sleep or parachute dreams or people who say we should want peace and babies instead. It’s a world full of mad wolves, and we hunt them til we die.”

Kate Quinn already amazed me with The Alice Network and she did it again in The Huntress.

I was also delighted that the narrator of this story was once more Saskia Maarleveld.

This book features Russian, German and English speaking characters and Saskia did an impeccable impersonation of all these characters, with a faultless (as far as I could judge of course) accent. She also really acted that story, being alternatively Ian Graham, ex war journalist of about forty, Nina Markova brazen and fearless ex Russian bomber or Jordan McBride, young American Bostonian. I think her acting the story added to my “reading” pleasure.

The story begins with Nina Markova living her youth in a small village around the Baikal lake. All her siblings left the house where only her drunk father remains. I won’t spoil here so let’s say that her father was brutal, not really the nurturing type and that young Nina learnt very early to survive in a hostile environment. Hunting game to eat, taking the fur to make boots. Nina is certainly no dainty flower but a very capable young woman. One fated day, she will fall in love with planes and will leave her father to become a pilot. More about it below.

Second point of view: Ian Graham. He is an ex war journalist but after the war ended he focuses on tracking Nazi criminals to have them facing judgment. He has high moral and strong ethic. He would never render justice himself but the same could not be said from his younger assistant Tony, American and professional charmer. Together they hunt criminals but one is escaping Ian: The Huntress. The Huntress is a Nazis mistress, Lorlei Faulk, who killed six young children among other crimes. Ian is fixated on her as she’s killed his younger brother: Sebastian.

Yet the woman is smart and escaped any attempt at tracking her so far.

That’s why Toni asked Nina, the only living victim of The Huntress to come work with them.

Jordan lost her mother many years ago and lives with her father who is an antiques dealer in Boston. Jordan has a passion for photography. She is a seventeen or sixteen years old teenager at the beginning of the story and in her early twenties by the end of it. She dreams of becoming a famous war correspondent or international photographer/journalist.

When her father introduces her to Anna-Lisa and her very young daughter Ruth, she is charmed by the young girl and wants to give that woman a chance. Only… a picture suggests that Anna-Lisa is maybe not the traumatized war refugee she pretends to be.

These are the “setting of the scene”.

Ian and Jordan’s in “present” time (even if Jordan has some chapters before 1950) and Nina from her teenage years to 1950.

Every character is fascinating but I confess that my favorite was Nina, even if Jordan was a close second.

Kate Quinn chose a particular perspective to tell Nina’s story : the story of the Night Witches and I found it absolutely fascinating and brilliant! It made me look after all the information I could find on the Night Witches, wanting to know if these women had existed or were a figment of Kate Quinn’s imagination! To my great delight, these women existed!

The Night Witches were a Russian regiment of night bombers composed solely of women! And these women had a much higher success rate than their male counterparts!

Nina, seizing her chance, forcing luck, joined this regiment. I adored all the chapters narrating the birth of this special force, the comradery between the “Sistra”, their training, their iron will, their audacity. What they went through and all their exploits were some of the best parts of the book!

It gave us a unique insight in Nina Markova’s personality.

Every character had secrets of his own, some personal cross to bear, some guilt to live with.  They were complex and flawed. They were brilliant and courageous. They simply were human.

We follow three parallel stories until they all collide towards one main goal: finding the huntress.

Alternating between point of views, between pas and present, leaving clues behind was a very smart choice to have a ratcheting tension in the book.

When would they realize who the huntress was?

Who would the Huntress kill next?

Would she vanish again never to be found?

I could gush hours about this story. About the down to earth and extremely efficient writing. About its complex and ingenious structure. About the exceptional fate and acts of some characters.  About …so many things!

But let’s conclude with: If you are a fan of historical fiction, you just HAVE to read this story.

If you want to know more about the Night Witches, here is a link to a very interesting article: https://www.history.com/news/meet-the-night-witches-the-daring-female-pilots-who-bombed-nazis-by-night

Have you read other books by Kate Quinn? Do you love historical fiction?