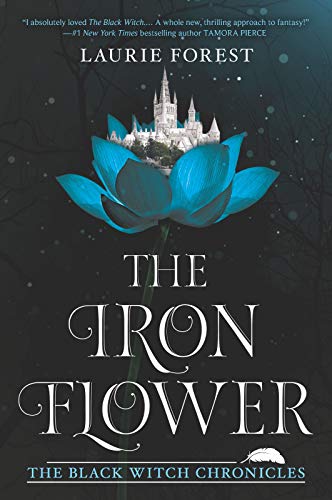 Elloren Gardner and her friends were only seeking to right a few wrongs, but their actions have propelled them straight into the ranks of the realm-wide Resistance against Gardnerian encroachment. As the Resistance struggles against the harsh rulings of High Priest Marcus Vogel and the Mage Council, Elloren begins to realize that none of the people she cares about will be safe if Gardneria seizes control of the Western Realm.With tensions heating up in Verpacia, more and more Gardnerian soldiers continue to descend upon the university…led by none other than Lukas Grey, now commander of the newly rebuilt Fourth Division base. Though Elloren tries to keep him at arm’s length, Lukas is determined to wandfast to her, convinced that she has inherited her grandmother’s magic—the prophesied power of the Black Witch. As his very nearness seems to awaken a destructive power inside her, Elloren finds it more and more difficult to believe that she’s truly powerless, as her uncle always claimed.

Caught between her growing feelings for the rebellious Yvan Guriel and the seductive power offered by Lukas Grey, Elloren must find a way to stay true to what she knows is right and protect everyone she loves…even if that means protecting them from herself.

A mini review not because that book was bad, on the contrary, but because I am so enamored with that series that I rushed to read The Shadow Wand.

When I stopped reading, I barely took the time to jot down these key words: drama, pain, sobbing, death, loss of friends, battles, injustice, romance, hidden powers. Unveiling the past…

In that second instalment, we’ll delve deep into Marcus Vogel insanity and race for the purity of the Gardnerian blood.

I talked about Nazism in the first book and this feeling intensifies in The Iron Flower. You feel in the air that there is a culling on its way and that added a tension, a race to save as many non-Gardnerian as possible that had my heart racing!

What our heroes are facing is a future tyranny and a witch hunt. Any non-Gardnerian must be chased or enslaved.

But there is a resistance trying to save as many as possible, to evacuate people before escape is impossible.

Elloren and her friends will be active members of the resistance, with the ever sexy and secretive Yvan Guriel. Haaa Yvan! Be still my heart! 😀

I loved the friendship of all these students from different races Diana and Jared the lupines, Winter, Yvan, Elloren, Andras, Gareth, Trystan, Rafe, Ariel …all united to save the oppressed and fight Marcus Vogel.

You also see a lot of woman power in the Iron Flower. Between the Amaz, fierce warrioresses living with no man in their land to the Vu Trin sorceresses. I admired these proud and lethal women. It was a nice counterbalance to the male dominion of the Magedom.

There is still an amazing worldbuilding at work! I loved visiting the Amaz’s city under their runed dome!

This was fast paced with twists and turns. Danger was lurking every corner and great sacrifices will be made to save loved ones, creating unexpected but true heroes.

I raged, I truly sobbed at what was done to all the races, at what happened to the Lupines and I simply wanted Elloren to win!

Oh and I rooted for Yvan and hated Lukas! We’ll see if that changes in the future!