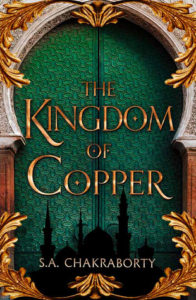 Return to Daevabad in the spellbinding sequel to THE CITY OF BRASS.Nahri’s life changed forever the moment she accidentally summoned Dara, a formidable, mysterious djinn, during one of her schemes. Whisked from her home in Cairo, she was thrust into the dazzling royal court of Daevabad and quickly discovered she would need all her grifter instincts to survive there.

Now, with Daevabad entrenched in the dark aftermath of the battle that saw Dara slain at Prince Ali’s hand, Nahri must forge a new path for herself, without the protection of the guardian who stole her heart or the counsel of the prince she considered a friend. But even as she embraces her heritage and the power it holds, she knows she’s been trapped in a gilded cage, watched by a king who rules from the throne that once belonged to her family and one misstep will doom her tribe.

Meanwhile, Ali has been exiled for daring to defy his father. Hunted by assassins, adrift on the unforgiving copper sands of his ancestral land, he is forced to rely on the frightening abilities the marid the unpredictable water spirits have gifted him. But in doing so, he threatens to unearth a terrible secret his family has long kept buried.

And as a new century approaches and the djinn gather within Daevabad’s towering brass walls for celebrations, a threat brews unseen in the desolate north. It’s a force that would bring a storm of fire straight to the city’s gates . . . and one that seeks the aid of a warrior trapped between worlds, torn between a violent duty he can never escape and a peace he fears he will never deserve.

Warning: don’t read this review if you haven’t read The City of Brass or you’ll be spoiled.

I HATE what has been done to Dara and how he turned out;

I HATED Muntadhir most of the time (some redemption by the end);

I HATE that I need the third book NOW and that I don’t know how I will manage!

I ADORE this series with a passion that knows no boundaries. 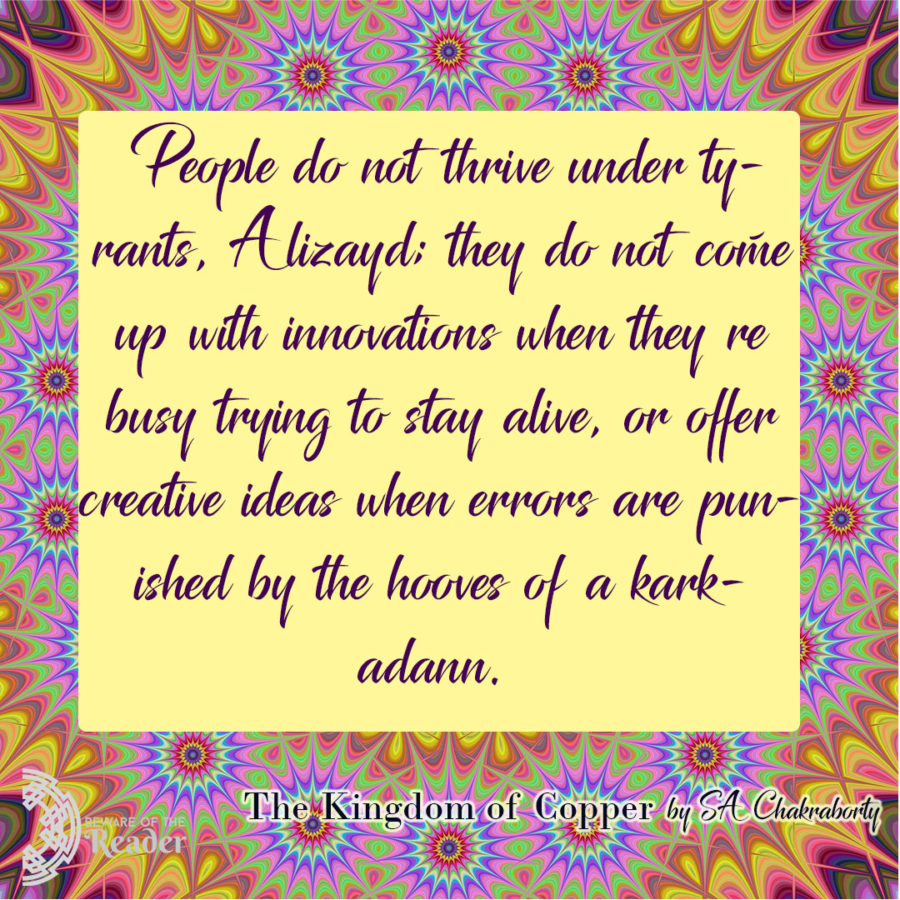 I don’t know how I will write this review as I listened to more than 23 hours of story being so engrossed that I forgot to take notes! I just wanted to listen and listen …all the time!

Now I have an epic book hangover and don’t know what to read less listen to right now!

I don’t want to give any spoilers here so I’ll stay vague on the plot and will focus on “some” of the character’s growth.

She has grown to love her people and want to do her duty, to protect and care for the Daeveas. She also is manipulated by Ghassan, tied to  Muntadhir in a loveless marriage. She grieved. Oh how she grieved Dara’s death! And amidst this disaster her friend Ali had to leave the town, hunted.

Nahri is also very confused about her feelings for Ali as he was the killer of Dara!

What I love about Nahri is her calling to heal and help people, her knack to survive as she is street smart but will Ghassan and Kaveh make her life horribly difficult!

Ghassan will never hesitate to kill innocents to make Nahri surrender to his will.

Ghassan is diabolical and a true villain.

What really marked me was the mess old hatred created between the people: the daeva, the Afsheen and the Ghaziri. One attacked while Nahri or Ali tried to maintain the peace and the other retaliated. It was a ticking time bomb.

Everyone seemed to be trapped into Daevabad and it reminded me of other conflicts like the one between the Israeli and the Palestinian. And the tyranny, the hatred destroyed Daevabad day by day.

“People do not thrive under tyrants, Alizayd; they do not come up with innovations when they’re busy trying to stay alive, or offer creative ideas when errors are punished by the hooves of a karkadann.”

It just seemed a never-ending story of hate and SA Chakrabory had an acute read of political problems!

I really loved Ali here! But I swear it’s like he is cursed as every time he wants to help people too there is some backlash and others are taking the brunt. He is so tired of violence answering violence but feels helpless.

“That goodness has gotten me nowhere in Daevabad. Everyone I try to help ends up worse off!”

“You don’t stop fighting a war just because you’re losing battles, Alizayd. You change tactics. Surely, that’s a lesson you learned in the Citadel.”

It was demoralizing as he is such a good man but seems to always choose a solution that will turn to the worse. He really is the epitome of “the roads to hell are paved with good intentions”!

Dara ….as I said I hated what’s been done to him and don’t know what to expect in the third book!

“I suppose our reputation are small prices to pay if it means our people are safe.”

Oh Dara …my heart broke for him, for Nahri.

Jumpshit will play a more important role here but he also will hurt someone that I care for so my feelings for him are ambivalent. On the one hand I love him for reasons I won’t disclose and because he suffered so much. On the other hand I just want to shake some sense in him as he is in love with Muntadhir and Muntadhir so does not deserve him!

I find Muntadhir egotistical even if from time to time he makes amend and tries to do some good or show remorse.

The story is brilliant, the pace just right, the political intrigue and plot really well thought to keep you interested and the characters are all encompassing!

PS Do you have another epic book to recommend? Because right now I have withdrawal symptomes!