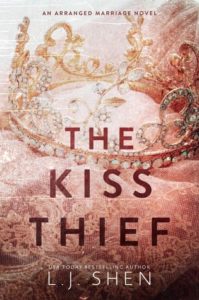 They say your first kiss should be earned. Mine was stolen by a devil in a masquerade mask under the black Chicago sky.

They say the vows you take on your wedding day are sacred.

Mine were broken before we left church.

They say your heart only beats for one man.

Mine split and bled for two rivals who fought for it until the bitter end.

I was promised to Angelo Bandini, the heir to one of the most powerful families in the Chicago Outfit.

Then taken by Senator Wolfe Keaton, who held my father’s sins over his head to force me into marriage.

They say that all great love stories have a happy ending.

I, Francesca Rossi, found myself erasing and rewriting mine until the very last chapter.

And somewhere between these two men, I had to find my forever.

Or rather two stars in the beginning and four stars after 25% in the book.

Reading this book I came to the conclusion that:

And that’s exactly how Wolfe was portrayed by Leigh Shen until 20 to 25 % of the book!  He was a womanizer but had only bad words for his dates. They were there to please him and he did not care to give them a great time. Everyone bothered him. He was insufferable and disrespectful with his governess Sterling. Even if he was portrayed as hot I had not a single warm feeling for him.

I hate when main characters smoke in a romance book .

I could never stand kissing a smoker without feeling like kissing an ashtray. If smoking does not bother me in crimes or thrillers, I don’t like it in romance when they are supposed to have a great time kissing. I just don’t buy it and don’t get into the book.

And these two pet peeves were the “setting of the scene”! So I hated the beginning of the book and complained to the friend who recommended the book to me that honestly it really did not bode well!

She advised me to DNF but I am stubborn and just wanted to see if the hype was deserved or if I was really an alien on the planet reader!

Fortunately, once the masks began to fall I began to warm up to Wolfe and Francesca.

It was not a flawless ride though as some things Wolfe did I didn’t like and the same can be said of Frankie.

But I found my pace and had a good time once the 25% mark was behind my back.

Wolfe was dead set on revenge and we had to wait a long time to know what happened exactly. I had an inkling but Leigh still had some tricks in her hat!

Francesca, once outside her father’s tyranny held her ground with Wolfe and seemed to become more mature and with a lot more will than I gave her credit!

This was an angsty, roller coaster read with mobsters, an ambitious senator, revenge and … an unexpected love story.