I’ve been kindly given an ARC by the author in exchange for an honest review.

On the heels of her beloved father’s murder, betrayed by those closest to her, Annabelle had a choice to make: accept the man responsible and fall in line, or suffer the consequences. Never one to back down, she rejected her new stepfather—then spent years ignoring his best efforts to crush her spirit.

Some people deny the darkest sides of themselves; Liam’s made a career out of his. Never once has he hesitated to pull the trigger, but an unexpected encounter with Annabelle leads to feelings he hasn’t experienced before—and doubts about his current assignment.

Liam knows he should leave her alone, keep his head down, and do what he’s being paid to do, but he can’t bring himself to stay away. He’s the last person anyone would classify a hero, but he can’t shake the doomed desire to be hers.

He shouldn’t want her.

She shouldn’t trust him.

On a course set for utter devastation, can these forbidden lovers find their way to happily ever after? 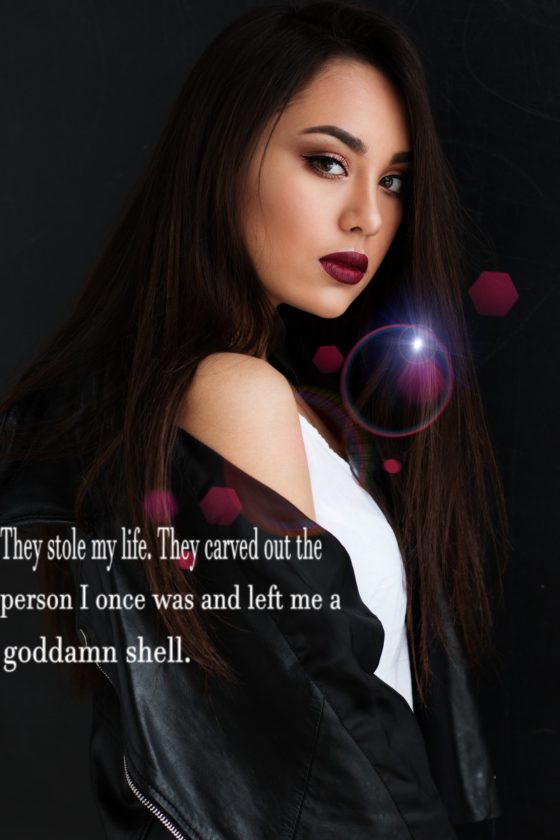 Annabelle’s father was the former Mob’s boss and has been killed for some years now, his rival marrying his widow. Yes, being a mobster is a hazardous job and you don’t grow old.

Annabelle has been forced to marry one of her stepfather’s soldiers. She is mourning her dad AND her loss of freedom.

She never had an inkling of feelings for her husband. Worse: he is a douche, infuriated by her lack of reactions and loves beating or raping her.

So her life sucks big time! Sorry to be blunt but that’s the truth.

What’s her coping mechanism? She’s either laughing and taunting her husband when he was violent or sleeping for days under her blankets. The first reactions I could respect even if it’s sometimes suicidal. Who wants to laugh and poke the bear? But her being depressed and sleeping for days did not go well with me.

“After the shopping excursion, I’m hit with a depressive state. Another cloudy chunk of time where I don’t leave my bed, but the sun rises and sets for everyone else.”

She’s a hard and sad life, I get it. She is entitled to feel depressed I would probably feel low as well. But it does not mean it’s pleasant to read about her mopping, dragging her cute butt from the bed to the sofa and despairing about her very unfortunate life.

I do tend to love strong heroines so Annabelle’s depressed-self annoyed me.

On her dad’s death birthday Annabelle will trespass a private property guarded with big scary guys to honor her dad’s memory. That’s either pretty stupid or pretty reckless. I did not know if I had to call her dumb or badass. Anyway the guards come running as good watchdogs would. Annabelle’s jokes don’t work on the fine muscled male specimen and she’s soon pinned against a tree trunk by one of the giants. And when I say pinned it’s nearly literal. She’s still clothed but feels everything with many details. I would have been terrorized but not Annabelle. I told you she’s either weird or badass. What does the girl do? She wraps her legs around the guy and enjoys herself very much.

“In response, I smile and wrap my legs around his waist, using my heels to pull him even tighter against me. It’s exhilarating, courting actual danger like this. I’m truly getting turned on, which is so inappropriate, and I wish I could find even a single fuck to give.”

Now that could be THE best tactic!!! Unsettle your opponent take him by surprise (pun intended).  Who knows? Maybe I should try but I really hope I’ll never get chased, threatened, etc. by scary hot guys.

What do you think will happen? They’ll knit scarves together? No of course! They’ll meet in secret and Liam will protect her. Only, there is a twist as Liam is not on the same side as her husband and stepfather.

Now, I had some issues with the book.

Now make up your own mind as my maybe personal  pet peeves aren’t yours!

And I really do want to thank the author for her trust. I’m amazed every time someone sends his/her book as they don’t know little me and yet they are ready to place their last baby in my greedy hands.