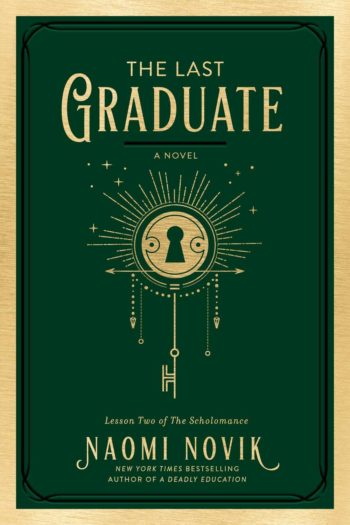 A budding dark sorceress determined not to use her formidable powers uncovers yet more secrets about the workings of her world in the stunning sequel to A Deadly Education, the start of Naomi Novik’s groundbreaking crossover series.At the Scholomance, El, Orion, and the other students are faced with their final year–and the looming specter of graduation, a deadly ritual that leaves few students alive in its wake. El is determined that her chosen group will survive, but it is a prospect that is looking harder by the day as the savagery of the school ramps up. Until El realizes that sometimes winning the game means throwing out all the rules . . .

Praise for A Deadly Education

“The scholomance is the dark school of magic I’ve been waiting for, and its wise, witty, and monstrous heroine is one I’d happily follow anywhere–even into a school full of monsters.”–Katherine Arden, New York Times bestselling author of The Bear and the Nightingale

“A must-read . . . Novik puts a refreshingly dark, adult spin on the magical boarding school. . . . Readers will delight in the push-and-pull of El and Orion’s relationship, the fantastically detailed world, the clever magic system, and the matter-of-fact diversity of the student body.”—Publishers Weekly (starred review)

Noooooo! It can’t end like this! I need the sequel! Now!

You’ve just been warned, this ends on another even more horrible cliffy!

At the beginning, the book felt slow to me. I needed to get back into that very intricate world with its unique magic system. It began as a continuation of the prequel and things fairly repeated themselves with El being constantly attacked by mals.

One thing that I got back with great pleasure was El’s grumpy attitude. El has been predicted to be the doom of the sorcerer’s world being insanely powerful yada, yada. She has been rejected by other sorcerers all her life because of that.

BUT under her piss poor attitude (who wouldn’t be prickly really if he or she has been shunned all his/her life?) El hides a heart of gold.

She CHOOSES to do good all the time!

Following her mom’s example, she is choosing the high path whereas going bad would be so easy for her.

At some point in this story though, things began to change.

From just a set of alliances with some friends, El will veer off course and rally much more students. Because El being El, she doesn’t simply want to graduate and go home. No, she wants to save all her classmates.

Imagine that! The dark sorceress ‘s grand plan is saving the universe. Take that grandma!!!

As the synopsis is saying winning the game means throwing all the rules! And THAT was interesting! I loved what El succeeded to build with the other students. Yes SHE, the outcast, built THAT! Sorry I am cryptic but I don’t want to spoil anything here.

Another thing that I really liked in that story was El and Orion’s dynamic. How she is sensible and cold and grumpy and challenging…but still falling for the boy.

And how Orion is socially clumsy, just very goal driven, his goal being killing all mals. Giving mals to Orion is like giving all the sweets in the candy shop to a kid: a boon!

There was one moment by the end of the story where we learned about Orion ‘s childhood and how people viewed and still view him, how coming to the Scholomance was the best thing that’s ever happened to him…until El. And I confess that my heart broke a little for that big adorable idiot of a hero.

In this sequel, you get an amazing world building, unique magic system, budding friendship, acts of heroism, snark and wits and flawed but very loveable main and side characters.

I hope that Mrs Novik is a fast writer because I need that sequel. And I need it to go the way I hope/pray. Else I’ll go bribe some sorcerer to jinx Naomi’s wardrobe and have her only find mismatched socks to wear 😉

Last word: the narrator Anisha Dadia is truly perfect for narrating El’s story and has El’s grumpiness down to a tee.