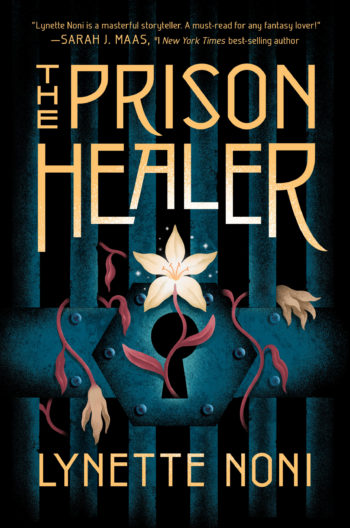 Seventeen-year-old Kiva Meridan has spent the last ten years fighting for survival in the notorious death prison, Zalindov, working as the prison healer.When the Rebel Queen is captured, Kiva is charged with keeping the terminally ill woman alive long enough for her to undergo the Trial by Ordeal: a series of elemental challenges against the torments of air, fire, water, and earth, assigned to only the most dangerous of criminals.

Then a coded message from Kiva’s family arrives, containing a single order: “Don’t let her die. We are coming.” Aware that the Trials will kill the sickly queen, Kiva risks her own life to volunteer in her place. If she succeeds, both she and the queen will be granted their freedom.

But no one has ever survived.

With an incurable plague sweeping Zalindov, a mysterious new inmate fighting for Kiva’s heart, and a prison rebellion brewing, Kiva can’t escape the terrible feeling that her trials have only just begun.

I didn’t plan on reading that book but more and more friends were raving about it and…peer pressure is a thing!

I didn’t know what to expect but I ended up being gobsmacked!

The Prison Healer begins with Kiva, eight years old, being imprisoned with her dad at Zalindov prison because someone saw his father with a rebel at the market.

While taking them prisoner, Kiva’s young brother will be killed by a guard.

This was a dramatic opening and it sucked me immediately into the story.

Soon enough, we are witnessing what the last ten years of imprisonment were for Kiva. We guess that her father must have died and she was left alone, fending for herself in a very hostile environment.

If there is one thing to say about Kiva it’s that she is a survivor!

I was horrified reading about the brutalities of the guardians towards prisoners, the rapes of women, the animosity other inmates had for Kiva, calling her names like “whore” and many others.

All while Kiva relentlessly worked to heal everyone in the prison.

From the brutal guard to the rebel leader of the prison. Everyone was horrible to her yet she cared. I couldn’t help but fall for Kiva even if she was a very guarded person and surrounded by an aura of mystery.

Things changed for her with the arrival of a new inmate, Jaren and a new female guard Naari.

Kiva always kept her distance with everyone in Zalindov, Tipp aside. Tipp is a young boy whose mother died and she swore to protect him.

Everyone dies quite fast in the prison and that’s why Kiva didn’t want to make friends. Because everyone leaves at one point or another.

When the queen of the rebels arrives unconscious and sick in Zalindov, things change again for Kiva.

She is asked to keep the Queen alive or suffer consequences. As the Queen must face four brutal ordeals and is unconscious, Kiva will offer to be her champion.

That’s it for the synopsis or I might give away spoilers.

For all that I fell right away into the story, it dragged somehow after the novelty of discovering what her life in the prison was wore out. But then as a plague affected the inmates, as the trials loomed on the horizon and as the relationship with the new inmate and the new guard unfurled, the story kicked in again until…a very unexpected big reveal.

I was gobsmacked and don’t know who Kiva is anymore as a person.

I had guessed some things but certainly not that! Not these last words!

Character wise, Kiva is the definition of a healer. She cares for everyone, even if some people repulse her. She never complains whatever brutalities she gets. She is very compliant because she wants to survive! She won’t be the one to stir up a rebellion as her goal is to see her family one day and she hopes that they’ll come free her. In the meantime she’ll do whatever it takes to stay alive.

Kiva is also someone who mistrust everyone else!

Earning her trust is very difficult as she is a very guarded person. But Jaren is determined to earn her affection and he is difficult to resist!

I loved the sweetness that Naari brought to Kiva. She only had known violence from the prison’s guards so having someone treating the prisoners with respect was a huge relief for Kiva! It was also a respite from the darkness for the reader.

Another thing that I loved in the story was the friendship Kiva had with Tipp.

She acted like a big protective sister for the little boy and this brought some hope, tenderness and levity in what was otherwise a very bleak story.

And of course, we have the slow burn with Jaren.

I must say that I breezed through that book and that Lynette Noni had me very surprised by the end!

Lucky for me, the sequel will be published in Fall this year!