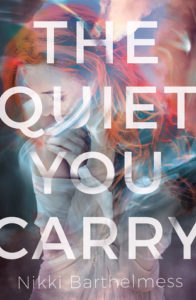 Victoria Parker knew her dad’s behavior toward her was a little unusual, but she convinced herself everything was fine—until she found herself locked out of the house at 3:00 a.m., surrounded by flashing police lights. Now, dumped into a crowded, chaotic foster home, Victoria has to tiptoe around her domineering foster mother, get through senior year at a new school, and somehow salvage her college dreams . . . all while keeping her past hidden.

But some secrets won’t stay buried—especially when unwanted memories make Victoria freeze up at random moments and nightmares disrupt her sleep. Even worse, she can’t stop worrying about her stepsister Sarah, left behind with her father. All she wants is to move forward, but how do you focus on the future when the past won’t leave you alone?

“No one can really see the quiet you carry, unless you let them.”

Thank you Flux, North Star Edition for giving me this book through Netgalley! As usual this had no influence on my willing and honest opinion!

The author in her acknowledgement explains how she was put in foster care when young and how she had no idea what that was before entering the system.

She gives what I think must be a very accurate description of foster care, with its overworked social workers, with foster parents enforcing strict rules, with kids thrown into it in the peak of a crisis and being left disoriented, groggy from what has been and is happening.

You’ve guessed from the synopsis that Victoria entered foster care after something her dad has done to her.

This first scene was brutal.

She was taken away by a police officer and a social worker and they were brusque with her.

Victoria had to leave everything behind: her phone, her computer anything of value and take only clothes with her.

She’s slept the night on a couch in the social worker’s office.

If this is not traumatizing, especially when added to what happened with her dad I don’t know what is!

From that moment on she will live with two other foster girls in the care of Connie. Connie is her foster mom and she had such strict rules that the girls hated her.

I confess that Connie’s character was very hard to like but that’s the beauty of this story: nothing is to be taken at face value and many characters hide their true self behind a mask!

This story shows the limits of the foster system and of justice. In case of abuse it’s the victim’s word against the aggressor. If the victim is mute because she is afraid of the consequences, she’ll be thrown into a very hard system.

Victoria will rage more than once again this system and against what is happening to her. She will also live in denial because like most victims she will have great difficulties to go against the perpetrator.

This book highlights how manipulator can perpetrate abuse and have the victims think this is not so serious. Victims often feel a sense of loyalty and obligation to their abuser as sick as that may seem.

Victoria’s dad was one of the worst manipulators.

He manipulated Victoria’s mom who convinced Victoria that a woman had to do everything to keep the husband happy. She also entrusted her husband into Victoria’s hands leaving her feeling responsible for her dad’s happiness. Hence not wanting to condemn him even after what he’s done.

This is a complex story as the characters go through a tempest of emotions and contradictory feelings. In this again the author did an excellent job portraying teenagers thrown into foster care and having to deal with being a victim. Coming to term with what has been done to them. Accepting their new situations is not easy! They are told they should make “the most of it” but most of the time they’ve been through trauma and landing in a stranger’s house, leaving all your friends behind really leaves you …lost.

I had no problem at all walking in Victoria’s shoes. She was solidly fleshed out as were the side characters as well. The friendship and budging romance helped alleviate some of the gloom and offered Victoria the support she needed. Because amidst all the drama, she remained a teenage girl who wanted to assimilate, to blend in, to live a normal life.

“I’m sorry I didn’t tell you,” I sob. “I couldn’t. It’s humiliating. It’s sick. It’s wrong. These aren’t normal problems. I just want to be normal.”

Have you read it? Do you enjoy reading books broaching topics like abuse? Or taking you out of your comfort zone?