THE REALITY OF EVERYTHING (Flight & Glory #5) by Rebecca Yarros
Release Date: August 24th 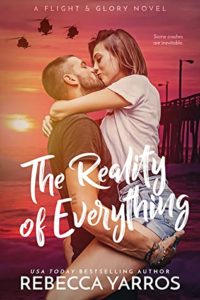 Two years after the man she loved was killed in Afghanistan, Morgan Bartley is trying to put the pieces of her life back together. The reno on her dilapidated beach house in the Outer Banks might be just the distraction she needs to keep her debilitating anxiety attacks at bay and begin to heal her heart…if she can ignore the ridiculously handsome guy next door.

At twenty-eight, single-dad Jackson Montgomery’s life revolves around his five-year-old daughter and his job as a search-and-rescue pilot for the coast guard. He’s no stranger to saving a damsel in distress, and though his gorgeous new neighbor is clearly in distress, she’s no damsel. She’s stubborn as hell with walls a mile thick, and the dog tags hanging from her rearview mirror give him a pretty good clue as to why.

It doesn’t matter that their attraction is undeniable―she swore she’d never fall for another pilot, let alone a military man. There are some wounds time can’t heal, and some fears too consuming to conquer.

She’s a barely breathing heartbreak on the edge of recovery.
He’s a crash waiting to happen.
Together they could have it all…if they can endure the coming storm.

“But what does it say about me that two years later I’m still so fucked-up about it that I have to be treated for a grief disorder? Why? Because I still think it’s so fucking unfair that everyone else in our group of friends got their happy endings at the expense of mine? What kind of person thinks that? What kind of person can’t talk to her best friend because all she wants to do is scream that it’s not fair? That everyone acted like my heart didn’t matter—I didn’t matter.”

Gosh did I hurt for Morgan!!!

I think this might be my favorite Rebecca Yarros book so far.
It is a kickass read with, in the last 8% of the story, a scene worth of any doomsday movie. Think “incredible rescue, being ready to sacrifice your life to save others, heart pounding and adrenaline rushing moments” kind of scene!.
I was holding my breath the whole time of that rescue.

I think this would be a perfect movie!!!

Morgan is grieving, even close to two years after Will’s death. Rebecca introduced me to something I didn’t know existed: complicated grief.
Morgan has big triggers that send her into huge panic attack.
She chose to move far from her friends as she couldn’t stand their happiness, how they seemed to go on after Will gave his life to save Josh and Jagger.
More than that, she is hurting as no one seems to realize she is missing Will like she would miss a vital organ. They were never truly together, just about to happen, and no one imagines that Morgan, who loved Will all her life on the sideline, is devastated by his death.

“Just like Peyton hadn’t chosen Will…and yet he’d still loved her until his dying breath. He’d loved Paisley, too, even when she’d chosen Jagger. But he’d never loved me, even though I was the only one who had ever chosen him.”

I confess that I was angry with her friends, Sam excepted.
When we got to a heart wrenching scene where Morgan finally explained how she learned of Will’s death, I was a boiling cauldron of emotions! Anger at life and at her friends, sadness for Morgan, rage…everything!

What happened to her was so unfair. How her friends robbed her of her right to grief and expected her to just go on was maddening!

I had so much feelings for Morgan! And was she strong and generous and …

I love single dad stories! They are my kryptonite!

And what a dad Jackson was!

He really did and do what was best for his little girl Finley, even if he was deeply attracted to Morgan!

“She had a broken heart, and I had a kid whose heart I couldn’t risk.”

He will think deep before going to Morgan but let’s just say he couldn’t resist!
Him being a coast guard and saving lives had me seeing stars. And when you get and opening scene worthy of Baywatch with Jackson going out of the ocean, slow motion style, all wet, with water rivulets sliding down his abs to join that special V trail…of course you’ll fall for the guy! I just combusted on the spot!

He loves saving people. That’s his job! So his neighbor seeming all broken and lost, he couldn’t avoid feeling attracted to her!

I admired his dedication to win Morgan’s heart without being an overbearing jerk. He protected all while helping her to stand on her own two feet. That guy respected the hell out of her! He gave her choices, never deciding for her even when she hurt and he itched of taking her in his big strong arms.

“I’m not about to be one of your regrets when I have the option to be your choice.”

When Morgan was “stuck” in the beginning, Hello Kitty knickers for everyone to see …I was laughing so hard!

And seeing all the other characters made me think a series reread was in order!

That book was an epic and swoony romance filled with wounded but incredibly strong characters. That’s just the kind of romance I live for and I am recommending this one a thousand times!

About the Author:
Rebecca is a Wall Street Journal and USA Today bestselling author of over fifteen novels, and is always ready to bring on the emotions. She’s also the recipient of the Colorado Romance Writer’s Award of Excellence for Eyes Turned Skyward from her Flight and Glory series.

She loves military heroes and has been blissfully married to hers for eighteen years. She’s the mother of six children, ranging from kindergarten to law school, and is currently surviving the teenage years with two of her four hockey-playing sons. When she’s not writing, you can find her at the hockey rink or sneaking in some guitar time. She lives in Colorado with her family, their stubborn English bulldog, and a feisty chinchilla. Having fostered then adopted their youngest daughter, Rebecca is passionate about helping children in the foster system through her nonprofit, One October.

Have you read Rebecca Yarros’s books?