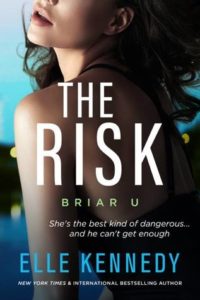 A sexy standalone novel from New York Times and international bestselling author Elle Kennedy. THE RISK takes you back to the world of hot hockey players, feisty heroines, bro banter, and steamy scenes… Everyone says I’m a bad girl. They’re only partly right—I don’t let fear rule me, and I certainly don’t care what people think. But I draw the line at sleeping with the enemy. As the daughter of Briar’s head hockey coach, I’d be vilified if I hooked up with a player from a rival team.

And that’s who Jake Connelly is. Harvard’s star forward is arrogant, annoying, and too attractive for his own good. But fate is cruel—I require his help to secure a much-coveted internship, and the sexy jerk isn’t making it easy for me.

I need Connelly to be my fake boyfriend.

For every fake date…he wants a real one.

Which means this bad girl is in big trouble. Nothing good can come from sneaking around with Jake Connelly. My father would kill me, my friends will revolt, and my post-college career is on the line. But while it’s getting harder and harder to resist Jake’s oozing sex appeal and cocky grin, I refuse to fall for him.

That’s the one risk I’m not willing to take.

The Risk cracked me up so many times! Brenna has sass aplenty and Jake loves being challenged back by the confident young woman!

It gives us great banter and rapid dialogs making for a never boring read!

The Risk is the second instalment in the Briar series and focuses on a tad “Romeo and Juliet” love story. This is not really taboo nor hate to love romance but rather an intense rivalry love story.

Breena is that gorgeous and confident girl, used to lead the dance with men. She is not looking for a boyfriend due to a past mistake that left her deeply hurt.

As coach Jensen’s daughter she has been raised in the hockey world and it’s become her passion. She wants to become a sports journalist and interview hockey players on camera.

“I dream of being on camera and sitting with those analysts at the big boys’ table, breaking down highlights, analyzing games, voicing my predictions. Sports journalism is a tough route for a woman, but I know my hockey, and I’m confident I’ll slay my interview tomorrow.”

She eats and breathe hockey, of course supporting her dad’s team at Briar.

Every other team is seen as the enemy and that’s especially true for Harvard’s players, their most serious and direct competitors in the championship.

Needless to say that Jake Connelly, Harvard’s hockey captain would never be seen as a potential friend/f@ck buddy and even less boyfriend!

He may be insanely gorgeous, over confident, smart and talented Hell would freeze before Brenna would give Jake the time of the day.

Only …. Jake is sooooo to Brenna’s taste!

“The arrogant gleam in his eyes is such a turn-on for me. I like guys like this. Direct, assertive, and self-assured. Alpha, but not the kind of alpha that orders you around and gets too overbearing. Jake possesses an easy confidence, a surety about who he is and what he wants.”

I won’t say more about the plot but you can guess that of course these two will enter some kind of relationship.

It was kinda a slow burn even if you feel right from the start that these two have insane chemistry!

What makes Elle ‘s stories special is her side character’s cast. I love when we not only get two main characters but a whole bunch of side characters/friends that add spice and drama to the story. After all, in real life, we don’t live on an isolated island interacting with our soul mate only.We do have friends and family right?

These friends and hockey players added a dynamic and fun element to the story keeping it upbeat and engaging. Some of my hardest laughs came from these crazy friends like Brooke’s “bubble butt” to cite only one!

You have some angst but not too much, some drama but not too much either. You have hot scenes but not hijacking the story. All in all an excellent story to have an entertaining time and cuddle on the couch on a cold afternoon!

Have you read Elle Kennedy’s books before?