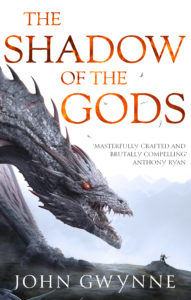 Set in a brand-new, Norse-inspired world, and packed with myth, magic and bloody vengeance, The Shadow of the Gods begins an epic new fantasy saga from bestselling author John Gwynne.

After the gods warred and drove themselves to extinction, the cataclysm of their fall shattered the land of Vigrið.

Now a new world is rising, where power-hungry jarls feud and monsters stalk the woods and mountains. A world where the bones of the dead gods still hold great power for those brave – or desperate – enough to seek them out.

Now, as whispers of war echo across the mountains and fjords, fate follows in the footsteps of three people: a huntress on a dangerous quest, a noblewoman who has rejected privilege in pursuit of battle fame, and a thrall who seeks vengeance among the famed mercenaries known as the Bloodsworn.

All three will shape the fate of the world as it once more falls under the shadow of the gods . . .

NOW I NEED THE SEQUEL!

This was my first John Gwynne and…it won’t be the last!

It was always my plan to read one of his stories so, when his editor at Orbit UK contacted me and asked me if I was interested in getting a finished copy, I said yes!

What will follow is an honest review as usual as I write these reviews for you, readers, and not the authors or publishers.

First, I have to say that I have always more or less “seen” scenes of my books while reading. I don’t see words but I see images (and I recently learned to my astonishment that not every reader does that!). But here, I did not only see the scenes, I saw ALL THE DETAILS!

I breathed the salt of the sea, I smelled the acrid odor of charred ruins, I felt the chaffing of the chainmail on my skin and my heartbeat beating like a wild horse in the throng of battles.

And I couldn’t help but seeing scenes of the Viking show because that was totally the vibes I got from that book, only…better, more…epic!

I think it’s partly due to John Gwynne’s own penmanship as he pays a huge attention to details while building his world of fallen Gods and power-hungry jarls. But it’s probably also due to what I learned is his passion: being a Viking reenactor! That must give him what any traditional search could never do: authenticity. There is no doubt this is the start of an epic Norse inspired series.

When I began reading, I needed some time to fall into the story because we are following three main characters. Switching POV interrupted each plot line and when you add this brand-new world I had to discover, it took some time to get my bearing. To really get to know these main characters and root for each of them.

I don’t want to give much details about the plot so excuse me for being relatively vague.

The Shadow of the Gods follows: Orka, Varg and Elvar.

Varg has been a slave, a thrall, all his life. But now he has escaped and his on a quest for revenge. He will cross path with famous warriors: the Bloodsworn. From slave to accompanying that “band of fierce brothers”, Varg will have an incredible development.

Elvar has been fighting with the Battle-Grim for three years now. She is dreaming of fame, of making a name for herself in this harsh land of Vigrid. A land where dangerous creatures exist, alongside the tainted, the descendants of the gods, all long dead except maybe for one of them trapped in a cavern for centuries. Being a woman does not earn her any favor nor does she want them. She is proud and determined to become a respected famous warrior.

Orka is married to Thorkel and they have a ten-year old son Breka. She is a huntress and will soon go on a desperate hunt to get back something precious that has been taken from her.

Each of these characters has his own plotline, all brutal and riveting.

I loved them all but I confess that I had a fondness for Orka, being a mom myself. She was a formidable fighter. Courageous, strong, determined, fast, bold, cunning and relentless. I couldn’t help but think of her as some of these legendary female warriors in fantasy video games, all skill and prowess in war. She blew me away and I also hurt so much for her, especially in that last scene.

The Norse mythology is ever present. Many of these people lived for fame and glory. We got plenty of fights and brutal battles and lots of twists and reveals. In that world of power struggles, on the brink of tremendous change, our characters will all have a role to play. Either to thwart the change, either to make it happen even if unwillingly.

I didn’t know how John Gwynne would make their path cross but these last twists and reveals were everything! That’s why I need the sequel now!

That book will make you sail on a drakkar while looking for Tainted to capture and sell at a good price. It will make you track your enemy through forests, rivers and mountains. It will make you fear for your favorite character and rejoice savagely when he or she takes the enemy’s life in a ruthless battle. And it will leave you shocked at the finale and very frustrated to wait for the sequel!