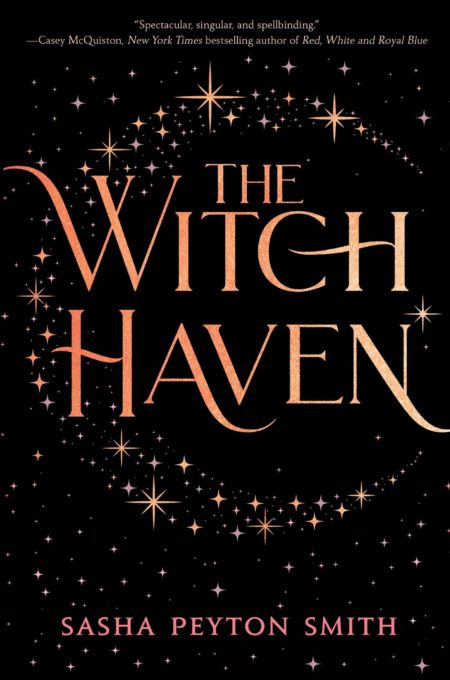 The Last Magician meets The Lady’s Guide to Petticoats and Piracy in this thrilling and atmospheric historical fantasy following a young woman who discovers she has magical powers and is thrust into a battle between witches and wizards.In 1911 New York City, seventeen-year-old Frances Hallowell spends her days as a seamstress, mourning the mysterious death of her brother months prior. Everything changes when she’s attacked and a man ends up dead at her feet—her scissors in his neck, and she can’t explain how they got there.

Before she can be condemned as a murderess, two cape-wearing nurses arrive to inform her she is deathly ill and ordered to report to Haxahaven Sanitarium. But Frances finds Haxahaven isn’t a sanitarium at all: it’s a school for witches. Within Haxahaven’s glittering walls, Frances finds the sisterhood she craves, but the headmistress warns Frances that magic is dangerous. Frances has no interest in the small, safe magic of her school, and is instead enchanted by Finn, a boy with magic himself who appears in her dreams and tells her he can teach her all she’s been craving to learn, lessons that may bring her closer to discovering what truly happened to her brother.

Frances’s newfound power attracts the attention of the leader of an ancient order who yearns for magical control of Manhattan. And who will stop at nothing to have Frances by his side. Frances must ultimately choose what matters more, justice for her murdered brother and her growing feelings for Finn, or the safety of her city and fellow witches. What price would she pay for power, and what if the truth is more terrible than she ever imagined?

When Simon and Schuster contacted me to ask if I would be interested in reading The Witch Haven, Sasha Peyton Smith’s first work, they used the words “The Last magician” meets “The lady’s Guide to Petticoats” with romance, magic and witch.

So of course I said yes!

And I am very happy because that doesn’t feel like a first work at all but as something that Libba Bray could have written or even Helene Wecker!

Sasha Peyton Smith did a formidable job describing a dark and gritty new York of 1911, with the new riches, child labor, deadly factories and the birth of the suffragettes movement in reply to the abhorrent misogyny! There was a real atmosphere in that book that made me think of gothic stories.

Frances is a seventeen years old girl who has lost her brother, murdered some months ago. It sent her mother to the asylum and she is now alone, working as a seamstress, exploited by an abject man, right alongside other women.

When her boss will assault her, dormant magical powers will be awoken and instead of ending up in jail she’ll be promptly whisked away by two women to a “sanatorium”: Haxhaven.

Only Haxhaven is no sanatorium but an academy for witches.

At first, Frances is amazed at discovering magic. And elated at the idea of having friends and being protected again.

The academy is busy protecting the witches, teaching them to blend in and to use their magic for household chores. This is nothing exciting and Frances becomes bored very quickly. Why have magical power if you can’t do something great with it?

She will very soon have two best friends, Maxine and Lena. Both equally resentful for the school. The school educates but corral witches too. For fear of exposure maybe given the centuries of witch Hunt.

Frances is torn between opposite feelings. She is grateful to have a roof upon her head, food and sisterhood. But she is also craving for so much more, she feels frustrated. The school that was once protection is turning into a prison.

It also doesn’t’ help that in her grief and immense sadness at having lost her brother a huge rage is also emerging. Frances craves justice for her brother. So much that while being an intelligent young woman she’ll be reckless in her actions, accepting a mysterious boy’s offer to teach her magic.

Granted Finn was her brother’s friend and he is mourning his death too. But what Frances did was still hasty and careless. She not only put her life in danger but the security of others as well.

I was often thinking “no, don’t do it!” and yet I could also understand her drive to learn more about her power and to use it to discover who killed William.

It was easy to walk in Frances’s shoes as she was a multi layered character. Lena and Maxine, her best friends, were both very interesting supporting cast. Lena being a Native American who had been taken from her family and forced to attend a government-run school, enduring atrocities reminded me of the recent shameful news.

The pace was perfect for the story, not hasty but not too slow either and the story is filled with plenty of twists and turns. I didn’t see most of them coming, only having a bad feeling about one of the characters late in the story.

I flew through that book and read it in two days. This is a very good setting for that duology and I’ll certainly read the sequel!