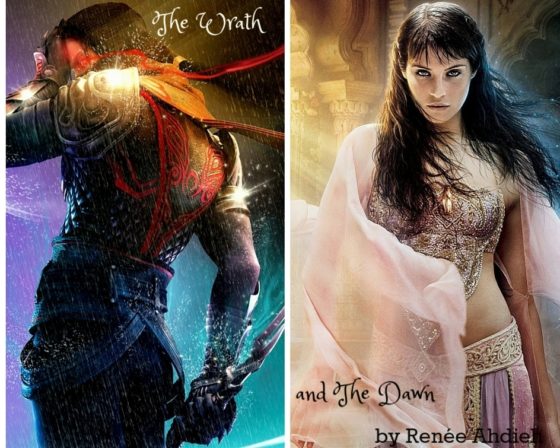 I loved everything in this book and I was taken far away from my ordinary life. I was on another time, in another place. Where the stars shine bright above deserts and conspiracy are carefully planned behind the dazzling walls of Persian palaces. In a world where boy kings with tiger eyes fall prey to exotic beauties with a tongue so sweet it can weave perfect tales, entrancing their audience. The figs are sweet, the cardamon tea spicy and the breeze carries the fragrant smell of a jasmine and rose garden.

”Because he’s not the monster I thought he was. There was so much more below the surface, and she had to know what lay at the root of it all.


Have you ever read a book so beautiful you feel humble and terrified of writing a review because you know you’ll never equal the beauty and magic of this book?

Well, that’s me right now. Renée Ahdieh’s writing was so beautiful, intricate but also simple I was enthralled from the very first sentence. My review will never do justice to this book.

This is the story of Shahrzad, whose best friend died at the hands of their ruler Khalid, sacrificed after one night of marriage with the King of Kings. Shahrzad swore to avenge her friend and asked to be chosen as his next spouse. To everyone’s astonishment, contrary to the other girls, she’s survived the night and the palace is now buzzing with rumors about the new queen.

Shahrzad is no fragile flower. She has sass, intelligence and character. Her first encounter with her big mouthed handmaiden embodies perfectly her fiery temper, hidden in a small body:

This is the beginning of their relationship: mistress and spy servant, exchanging barbed remarks, both girls careful in their burgeoning friendship.

“Shahrzad paused in consideration. “So he sent you here to spy on me?” Despina’s white teeth flashed in her face. “Yes.” “Are you a good spy?” “The best.” “A good spy would hide her identity.” “The best spies don’t have to.” Shahrzad smiled at this, in spite of herself. “You’re arrogant.” “As are you, my lady Shahrzad. But I do not see this as a shortcoming. For without a measure of arrogance, how can one attempt the impossible?”


Suffice to say all the side characters were really interesting, each one with its own personality, its own agenda and they all contributed weaving this perfect tale:

But above all else, the most complex character was Khalid, our King of Kings. Seemingly cold, removed and cruel he was drowning in guilt, desperate to protect his people at all cost… until Shahrzad. This boy-king with the tiger’s eyes. Too young a ruler, fearsome warrior, determined to stay unmoved and alone until Shahrzad. He hides a terrible secret and Shahrzad is determined to uncover the truth about all the girls death.

Shahrzad was meant to die, like all the other girls before her. She lasted one night, two nights… he did not want to keep her. He would order her assassination but… saved her at the last moment. My heart raced like a horse reading that particular scene as I experienced Shahrzad’s desperation, her struggle when faced with death. This scene was a turning point in Khalid’s life, as the kiss in the souk was for Sharhzad.

“There are no excuses for what happened this morning. I want you to—” “Where were you?” Shahrzad tried to control the tremor in her voice. “Not where I should have been.” “This morning and last night.” His breath fanned on her skin as he bent toward her ear. “This morning, I was not where I should have been. Last night, I was not where I wanted to be.” Shahrzad tilted her face upward, and her eyes grew wide at what she saw. His hands tightened at her waist. He lowered his head and pressed his brow to hers, his touch as soft and gentle as a whisper. “My Mountain of Adamant.”

And so began their story but Shahrzad also hid a dreadful secret. What would Khalid do once he discovered her treason? Would he forgive her? What kind of spell did Shahrzad cast upon the boy king?

“What are you doing to me, you plague of a girl?” he whispered. “If I’m a plague, then you should keep your distance, unless you plan on being destroyed.” The weapons still in her grasp, she shoved against his chest. “No.” His hands dropped to her waist. “Destroy me.” The bow and arrow clattered to the ground as he brought his mouth to hers. And there was no turning back. She was drowning in sandalwood and sunlight.

Now, I have to confess: I bought this book months ago as it was on sale but only read it two days ago. And that’s one of my best decisions to wait because now I only have to wait four days to know the end!!!!  I don’t know how the “early” readers did to survive the huge frustration of waiting months.

” I failed you in one last thing. Here is my chance to rectify it. It was never because I didn’t feel it. It was because I swore I would never say it, and a man is nothing if he can’t keep his promises. So I write it to the sky— I love you, a thousand times over. And I will never apologize for it. Khalid »