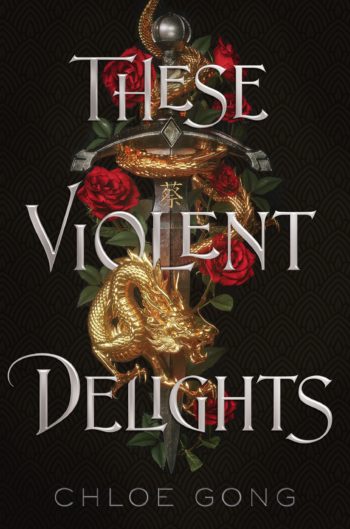 The year is 1926, and Shanghai hums to the tune of debauchery.A blood feud between two gangs runs the streets red, leaving the city helpless in the grip of chaos. At the heart of it all is eighteen-year-old Juliette Cai, a former flapper who has returned to assume her role as the proud heir of the Scarlet Gang—a network of criminals far above the law. Their only rivals in power are the White Flowers, who have fought the Scarlets for generations. And behind every move is their heir, Roma Montagov, Juliette’s first love…and first betrayal.

But when gangsters on both sides show signs of instability culminating in clawing their own throats out, the people start to whisper. Of a contagion, a madness. Of a monster in the shadows. As the deaths stack up, Juliette and Roma must set their guns—and grudges—aside and work together, for if they can’t stop this mayhem, then there will be no city left for either to rule.

Perfect for fans of The Last Magician and Descendant of the Crane, this heart-stopping debut is an imaginative Romeo and Juliet retelling set in 1920s Shanghai, with rival gangs and a monster in the depths of the Huangpu River.

Telegraphic review as I am so behind on everything!

First I have to say that even if my rating is three stars, I am impressed that such book has been written by someone still in college!

-The romance.
Honestly, this is sold like a retelling or Romeo and Juliette and if there is the hate between gangs etc. I expected to feel more love and attraction between the main characters!
We don’t see much of their past story together either and it does not help to feel the love.

-The Monster
I think I would have loved the book better if it had only been a historical book between rival gangs in Shanghai.
I am sure many will love the monster and what it entailed as it added a horror element to the story but it just confused me or rather, distracted me.

-Roma
Gasp! I usually love the male main character better than the female but that was not the case here. He was a little “meek” if I may say so, yet he did some killing. But for as much as he could beat a man, it was kind of halfhearted. He didn’t believe in what he did.
Now if he only had a huge golden heart and been a softie, I wouldn’t have minded but he was in a weird “in between”. Nor angel, nor vicious gangster. And that left me uncertain on how to feel about him.

-The transgender?
I use a question mark here because if not for other reviewers I wouldn’t have even grasped there was a transgender in the story! That means that it’s an unexploited trope in my eyes. Something you add to have “diversity” in your book and be “politically correct”.
If you use it please, go all in!

-Juliette Cai!
I think Juliette was this book’s saving grace.
I read somewhere that “she could crush me under her heels and I’d be happy”. I don’t recall who used that wording but I do agree with them.
Juliette was passionate about her people, she was courageous, ruthless and she was all in in that gangster business.

-The bromance
And I wanted more of it because it had potential, again not exploited enough but that added a welcome element to the story. In these few moments where we grasp that there is “something” between Benedikt and Noah, I felt more attraction and love than in what should have been our main love story.

Now, I am conscious this can come as harsh and I want to say that many love that book! So I would advise to read other, more enthusiastic reviews to make up your mind about a book whose writing was beautiful but was unfortunately not my cup of tea.