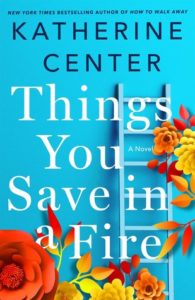 Cassie Hanwell was born for emergencies. As one of the only female firefighters in her Texas firehouse, she’s seen her fair share of them, and she’s excellent at dealing with other people’s tragedies. But when her estranged and ailing mother asks her to uproot her life and move to Boston, it’s an emergency of a kind Cassie never anticipated.The tough, old-school Boston firehouse is as different from Cassie’s old job as it could possibly be. Hazing, a lack of funding, and poor facilities mean that the firemen aren’t exactly thrilled to have a “lady” on the crew, even one as competent and smart as Cassie. Except for the handsome rookie, who doesn’t seem to mind having Cassie around. But she can’t think about that. Because she doesn’t fall in love. And because of the advice her old captain gave her: don’t date firefighters. Cassie can feel her resolve slipping…but will she jeopardize her place in a career where she’s worked so hard to be taken seriously?

Katherine Center’s Things You Save in a Fire is a heartfelt, affecting novel about life, love, and the true meaning of courage.

“It takes guts to walk into a burning building or staunch an arterial bleed—no question. But it also takes a special kind of brain. Firefighters think differently from other people, and this is especially true of me. Because when everybody else is panicking, when the entire whole world is freaking the heck out—that’s when I get calm.”

I listened to that audiobook nearly in one go, finding new chores to do, more errands to run, some more walks for my dog just to be able to listen to it!

The narrator Thérèse Plummer is very good at doing the job of narrating Cassie’s life story.

In her preface, Katherine Center refers to her husband who is a firefighter and who helped give such an authentic feel to the story.

As you can see in the first quote, it takes a sepcial person to become a firefighter! I already respected them, now I am admiring them!

Cassie is a firefighter and paramedic. She is great at her job and it’s a real calling for her. You can feel all along that she breathes that job, that she was made for it.

She is efficient and has a huge asset: she is calm when you have a crisis!

“I’m at my very best when things are at their very worst.”

Katherine Center will show us that, in that very macho universe, woment have to work twice as hard as men to prove they are worthy to work in that field!

This is still a reality nowadays and I truly loved when Cassie showed all these big burly males that she could best them, be it at basketball or pull up or …

That was inspiring as I am always for girl power! 😀

Cassie would have stayed in her station if not for an incident the day she was meant to get an award.

That’s when she clocked the official, the mayor’s second in command, with her prize and gave him a concussion! He asked for it, groping her behind and there was lots of bad blood in their past.

Now, Cassie was punished and instead of a bright future and a promotion, she had to pack her bags and go join her estranged mother in a very macho station.

All her life has been upended!

But Cassie is a fighter and she’ll face it dead on!

“That’s the thing I always love best about the human race: How we pick ourselves back up over and over and just keep on going.”

She was very angry with her mother calling her as she hadn’t seen her for such a long time. Now she had to come rescue her! How unfair right?

But that’s when Katherine Center develop the concept of forgiveness.

“Forgiveness is about a mind-set of letting go.” She thought for a second, then said, “It’s about acknowledging to yourself that someone hurt you, and accepting that.” Done, I thought. “Then it’s about accepting that the person who hurt you is flawed, like all people are, and letting that guide you to a better, more nuanced understanding of what happened. Flawed, I thought. Okay. Check. “And then there’s a third part,” she went on, “probably the hardest, that involves trying to look at the aftermath of what happened and find ways that you benefited, not just ways you were harmed.”

And there will be lots of forgiveness happening in this book, for past events, for Cassie but also other side characters.

It was beautiful how so many were eaten by something they regretted or resented and began to heal once they decided to forgive. That may sound cheesy but I assure you that remaining bitter, angry or hateful sucks a lot of energy out of you while forgiving will fill you with only positive energy.

Cassie was focused on her job only.

She had suffered from several trauma and built a wall around her heart. Better to keep everything business than being hurt right?

But that was until the Rookie arrived at the station!

He is new and untrained whereas Cassie is new but very experienced. She will teach him the ropes.

If her attraction to him was immediate, she was so good at ignoring her feelings that it’s been a very slow burn!

But I do happen to love slow burns so I was very happy!

The Rookie was a perfect hero: sweet, capable, caring, charming and sexy!

You will want to put him under “boy you’d introduce to your mother” label. I didn’t find a single fault to him and I thought he was Cassie’s perfect match. She was tough and he was sweet. Both very determined to save lives and great human beings.

Katherine Center has written what I would call very smart and nuanced woman fiction, treating sensitive topics like abandonment issues, abuse, grief, illness, guilt with an accurate but respectful touch.

“I had told my story. I had put it into words, at last… Telling the story changed the story for me. Not what had happened–that I could never change–but how I responded to it.”

This was my second story by that author and I already know that I am up to reading How to Walk Away next month.

Have you read it? What  did you think of it?