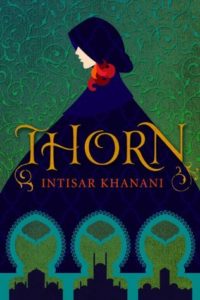 For Princess Alyrra, choice is a luxury she’s never had … until she’s betrayed.Princess Alyrra has never enjoyed the security or power of her rank. Between her family’s cruelty and the court’s contempt, she has spent her life in the shadows. Forced to marry a powerful foreign prince, Alyrra embarks on a journey to meet her betrothed with little hope for a better future.

But powerful men have powerful enemies–and now, so does Alyrra. Betrayed during a magical attack, her identity is switched with another woman’s, giving Alyrra the first choice she’s ever had: to start a new life for herself or fight for a prince she’s never met. But Alyrra soon finds that Prince Kestrin is not at all what she expected. While walking away will cost Kestrin his life, returning to the court may cost Alyrra her own. As Alyrra is coming to realize, sometime the hardest choice means learning to trust herself.

Thorn will be re-released by HarperTeen in Winter 2020.

As I am so behind on reviews and audiobook don’t allow to take notes while listening to it (contrary to ebooks) I will go with a list of thoughts about that story.

Listening to that slow/steady paced story felt soothing, compelling and magical. A unique tale that I recommend wholeheartedly if you are looking for something different from the fast paced and action-packed magical stories.

Have you read that book already?

Leave a Reply to Em @ The Geeky Jock Cancel reply