As I didn’t have time to write in depth reviews and as these books left me with some mixed feelings, I opted to write these mini reveiws. I hope you enjoy. 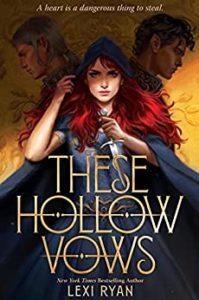 From New York Times best-selling author Lexi Ryan, Cruel Prince meets A Court of Thorns and Roses in this sexy, action-packed fantasy about a girl who is caught between two treacherous faerie courts and their dangerously seductive princes.

Brie hates the Fae and refuses to have anything to do with them, even if that means starving on the street. But when her sister is sold to the sadistic king of the Unseelie court to pay a debt, she’ll do whatever it takes to get her back—including making a deal with the king himself to steal three magical relics from the Seelie court.

Gaining unfettered access to the Seelie court is easier said than done. Brie’s only choice is to pose as a potential bride for Prince Ronan, and she soon finds herself falling for him. Unwilling to let her heart distract her, she accepts help from a band of Unseelie misfits with their own secret agenda. As Brie spends time with their mysterious leader, Finn, she struggles to resist his seductive charm.

Caught between two dangerous courts, Brie must decide who to trust with her loyalty. And with her heart.

OK this review reflects my personal taste only.

It has nothing to do with the author’s writing (I can’t fault it) or anything else.

It’s just that I wanted to bash the heroine’s skull so often!
I HATE betrayals and manipulation in books. And I am not talking about cheating (that I hate too) but about lying to someone you love, manipulating him, stringing him along. Even if you have “good” reasons it really infuriates me!!!

In real life I hate liars and manipulators and that’s what that book was based upon.

Later on, I realized that everyone had his own agenda and was lying and manipulating everyone.

Talk about adding insult to injury…

I really wanted to love that story but I ended up skimming around the end just to know how this would end.

You got surprises and plot twists, which is a good thing but that’s not enough to make me want to read the sequel.

Now, the writing was good, the world building was alright, the characters had depth so I’d say if the manipulating others is not a pet peeve for you, go for it and make your own opinion.

Thank you for respecting my personal opinion, even if you don’t share the same one about that book. I am in fact glad if you loved it because that means you had a good time and the author who worked long hours on that story get love back from her readers. Reading is always a personal experience and not all books are meant to please everyone.
I am always sorry when I can’t write a glowing review as I know the work authors put in their stories.
But I swore to always be honest in my reviews and that’s what I am doing here. 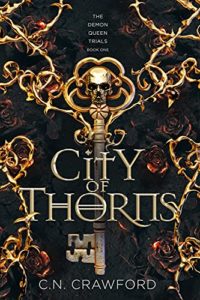 I never thought I’d be singing happy birthday to myself in a dungeon. And yet when a sinfully sexy demon crashes happy hour, that’s exactly what happens. He’s known as the Lord of Chaos, he’s mistaken me for my succubus doppelgänger.

Happy birthday to me.

When he tastes my blood, he finally understands I’m mortal. And I realize we have something in common: we both crave revenge. So we make a deal: I can stay in the forbidden city to hunt for my mom’s killer. In return, I’ll help him get the vengeance he craves. I just have to pose as a sexy succubus. One problem–he’s my number one suspect.

And that’s increasingly hard to remember as he teaches me my role: seduction. With each heated touch I drift further into peril. And if I fall under his seductive spell, death awaits me.

“I flew through this book… Hot demon lord—check, action—check, romance—check. And there’s spice! If you love my books, you definitely want to read this one.” — Laura Thalassa

Just a few words to share my reading experience.

That book was so hyped on Instagram that I decided to try my luck.
It has demons in it and what was rumored a strong heroine. It should have been my jam.

The beginning was …not what I had expected.
The heroine had me wanting to roll my eyes all the time.
First with the presentation scene where she can’t either ignore someone making faces at her, either report him privately to the teacher.

Then later, when she was in the City of Thorn and attempting to make the king jealous, this all felt forced, too cliché.
I didn’t connect with her nor with Lord Chaos who was so sexy!

I was ready to give it two or three stars.

And then, something happened around 70% in the book.
I guess I really fell into the story. Rowan was more and more convincing in her impersonation of that succubus demon, secrets were revealed by Lord of Chaos and I was intrigued by the mystery of her past.
It also helped that weird things began to happen to her that had my interest picked.

The last 30% were more around 4 stars and good enough for my personal taste to want to read the sequel.

So disaster averted and yes I’ll read the sequel. 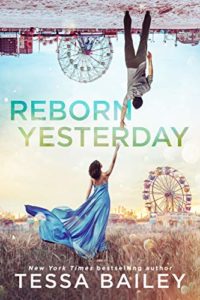 A timeless love story with bite.

It was a night like any other for funeral home director Ginny Lynn, until the exceptionally handsome—and unfortunately deceased—young man on her embalming table sat up, opened his emerald eyes and changed the course of her life forever, making her feel quite fluttery while he was at it.

Humans aren’t supposed to know Jonas Cantrell, or any vampire, exists. It’s kind of a major rule. Despite his instantaneous bond with perfectly peculiar Ginny, he has no choice but to erase her memories of their one and only meeting.

That was the plan. Before a reluctant Jonas can wipe Ginny’s mind clean, she reveals a secret that brings their worlds crashing together. Human and vampire. Past and present. Darkness and light. And while their love is strictly forbidden, it might be the only thing that can save them…

Reborn Yesterday is a standalone paranormal romantic comedy with a happily ever after.

Mini and contrasted review for this one.

I loved the beginning of the book. It was nearly a five stars until… we reached the hot and bothered/dirty talking part.
When things got really serious and physical, it was like a personality transplant. I mean, Jonas who had been all sweet and proper and romantic suddenly changed a lot.

I’d say that I preferred the courting phase, all romance, banter and clumsiness.

But let’s get back.

What I absolutely loved in that story are the characters. Until they changed to look like many other more conventional characters that is.

Ginny was absolutely adorable. As a mortician, she’s always been seen as the odd one, rejected, without any friends while she was one of the sweetest heroines I’ve read about this year!
I just wanted to kick everyone who hurt her really.
I also found her love of making dresses so endearing!

She had a fresh personality, a little naïve in her replies sometimes and that gave me the same feeling I have when I watch puppies video. I was sighing and having little stars in my eyes. A “feel good” vibe.

When Jonas comes “awake” on her table, it was an instant connection.
And I loved him too! He was charming, protective and a little bit old fashioned. Not at all like these uber powerful, protective and frightening vampires I read about in other PNR novels.
He was protective yes, but in a sweet way.
That was so refreshing!

Their banter was clumsy, charming but real.

I also loved Roxana, the vampire slayer with very sexy clothes that would kill Jonas and his friends “tomorrow”. You could see that under her kickass appearance she had a golden heart.
And I was very happy to see Ginny finally having a friend!

This was headed to be a 4,5 stars at least for a long time until as I said the characters changed and looked more like my traditionals spicy PNR novels.
This is very weird because I love these novels but I think what made this story so appealing here was the uniqueness of the characters, their clumsy but sweet relationship.
When the author took them to more traditional territories, she lost me.

But all in all, this was a quick and enjoyable read.

As many give it five stars, don’t let my comments above deter you and give it a try to make your own opinion.