Today in Top 5 Tuesday hosted by Shanah @bionicbookworm the topic of the day is maps.

Well Shannah, you made me sweat !

Not because I didn’t own five books with maps because I have more than five but because I was thinking : “What will I say to make a post”????

I could go the easy road and only show my picture of the book maps and jot the titles down. Maybe add a summary.

But where would be my smartass comments and snarky comebacks?

I really felt like Jay alias James Cudney when he wrote his 365 days post and talked about everything from friendship to giggling….

I could explain what a map was and following Wikipedia it is: “A map is a symbolic depiction emphasizing relationships between elements of some space, such as objects, regions, or themes.

Many maps are static, fixed to paper or some other durable medium, while others are dynamic or interactive. Although most commonly used to depict geography, maps may represent any space, real or fictional, without regard to context or scale, such as in brain mapping, DNA mapping, or computer network topology mapping.”

The name map comes from the medieval Latin Mappa mundi, wherein mappa meant napkin or cloth and mundi the world.

Well let’s go to something different then.

What about the preconceived notion that women can’t read a map?

When you ask a human male if you can help guiding him and read the map he will most of the time look at you in a very condescending way.

Like “Ok blondie you are cute as kitten but let the adults make the important decisions here”.

Just playing this scene in my head and I want to kick him in the balls! Jerk!

There is even a book titled “Why Men Don’t Listen and Women Can’t Read Maps” written by Alan Pease and Barbara Pease! See Shanah I learn so many interesting things while writing your top 5!

It even seems a funny if not interesting read as the synopsis begins with:

“Have you ever wished your partner came with an instruction booklet? This international bestseller is the answer to all the things you’ve ever wondered about the opposite sex.”

Professor Adrian Furnham from University College London even said “’Various studies have shown that there is a small but significant difference in spatial intelligence between men and women.

‘This research is arguing that as soon as there are male hormones in the body, spatial ability goes up and female hormones bring it down.

‘Some people would say this explains why jobs which require a high degree of spatial intelligence – such as engineers, architects and airline pilots – employ so few women. In general, women go in for occupations which do not require high levels of spatial skill.’

This coming from an article in the Dailymail that you can find here: http://www.dailymail.co.uk/news/article-15725/The-real-reason-women-read-maps.html

Well I guess that I have many male hormones then because I CAN read a map and NEVER get lost like ever! Yet last I checked I had boobs and hips and …

My mom and cousin though that’s a whole other story! Forget handing them the map or you’ll find yourself in NY instead of Seattle. I kid you not my mom drove once to Paris instead of Brussels. For our non European friends see the NY/Seattle reference above that’s the same. Only smaller. Much much smaller. But everything is big in the US.

My cousin even walked 10 miles one day because she went in the opposite direction of the one she was supposed to go. Of course when she began seeing cows and lambs instead of seagulls when she had to go to the coast she realized something was amiss. Either they had had a big genetic mutation and it was urgent she leave this nuclear zone either she was on the wrong path once again…

Based on Adrian Furnham’s theory you should come to the conclusion that all female characters in the books below are “manly” women. Hairy and in need of a good wax twice a week. Maybe Rianelle has the deep voice of a drunken sailor who smoked all his life? Well Lada was maybe a little bit “manly” I can give you that but Amany the dreamer I don’t think so!

So what do you think of these theories? I think they are a load of crap!

Now let’s go to my top 5 books with maps!

Here below you can admire the fantastic maps of:

-Reaper at the Gate by Sabaa Tahir;

-Bright we Burn by Kiersten White;

-These Rebel Waved by Sarah Raasch; 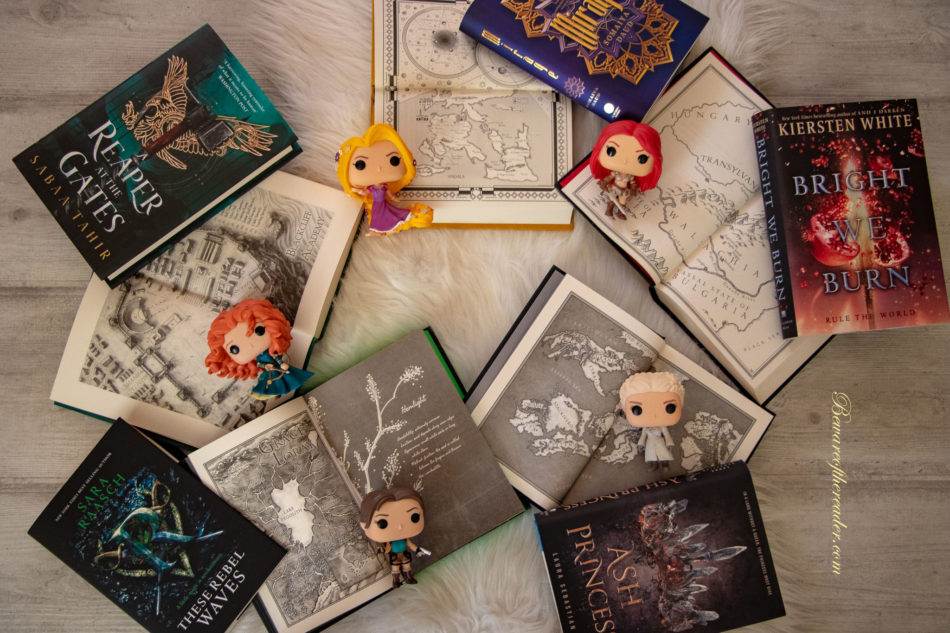 What are your top 5 books with maps inside?

Have a wonderful Tuesday and thanks for reading!