You should really visit her blog as she has really interesting topics and discussions about books, reviews etc. She is super friendly and a really kind person!

Shanah made me sweat with this one as I haven’t read so many retellings. So I came with a mix of reads and wanting to read.

The Wrath and The Dawn retelling for 1001 nights

I really fell in love with Renee Ahdieh penmanship with this fantastic retelling of 1001 nights.

Just to give you an idea here is an excerpt of my review where I’m gushing over Renee’s writing:

I loved everything in this book and I was taken far away from my ordinary life. I was in another time, in another place. Where the stars shine bright above deserts and conspiracy are carefully planned behind the dazzling walls of Persian palaces. In a world where boy kings with tiger eyes fall prey to exotic beauties with a tongue so sweet it can weave perfect tales, entrancing their audience. The figs are sweet, the cardamon tea spicy and the breeze carries the fragrant smell of a jasmine and rose garden.” 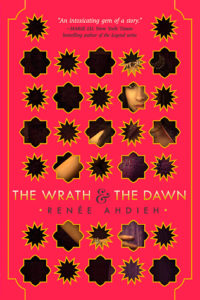 Cinder retelling for Cinderella of course

I’ve read this one pre-Goodreads and never posted a review. It was when I shopped at our local Waterstone shop (we have maybe one in my country) and I loved the colorful cover. The concept seemed promising with a futuristic cyborg Cinderella.

I remember loving it but the end is not exactly Cinderella-like.

“A forbidden romance.
A deadly plague.
Earth’s fate hinges on one girl . . .

CINDER, a gifted mechanic in New Beijing, is also a cyborg. She’s reviled by her stepmother and blamed for her stepsister’s sudden illness. But when her life becomes entwined with the handsome Prince Kai’s, she finds herself at the centre of a violent struggle between the desires of an evil queen – and a dangerous temptation.

Cinder is caught between duty and freedom, loyalty and betrayal. Now she must uncover secrets about her mysterious past in order to protect Earth’s future.

This is not the fairytale you remember. But it’s one you won’t forget.”

ACOTAR for the Beauty and the Beast

This series is one of my favorite. I loved the first book but the second one was my favorite due to the female character’s evolution.

Feyre is playing the Beauty and Tamlin the Beast in this one.

What I wrote about this one:

I did not think I could love that heroine as much as Celaena but I did. Feyre is a mere human but fights with all her strenght to survive and care for her family. She made an oath to her dying mother and she’ll protect her family at all costs. Illiterate, she’ll learn to hunt by observing other hunters. She’ll also master swimming and many othe survival skills with sheer willpower.

It’s a stunning and imaginative rendering of “Beauty and the Beast” tale, one I relished reading till the last page. Better than the brother Grimm’s tale. It was also cruel and the torture she had to go through was sometimes unbearable and I had to take deep breaths and stop my reading. 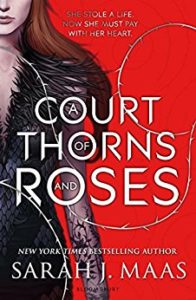 The Great Hunt  by Wendy Higgins

I haven’t read it yet but really want to.

This one is inspired by the Grimm Brother’s tale “The Singing Bone”.

Here is the synopsis:

“Aerity…” Her father paused as if the words he was forming pained him. “I must ask you to sacrifice the promise of love for the sake of our kingdom.”

She could only stare back, frozen.

When a strange beast terrorizes the kingdom of Lochlanach, fear stirs revolt. In an act of desperation, a proclamation is sent to all of Eurona—kill the creature and win the ultimate prize: the daughter of King Lochson’s hand in marriage.

Princess Aerity knows her duty to the kingdom but cannot bear the idea of marrying a stranger… until a brooding local hunter, Paxton Seabolt, catches her attention. There’s no denying the unspoken lure between them… or his mysterious resentment.

Paxton is not the marrying type. Nor does he care much for spoiled royals and their arcane laws. He’s determined to keep his focus on the task at hand—ridding the kingdom of the beast—but the princess continues to surprise him, and the perilous secrets he’s buried begin to surface. 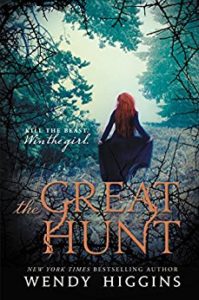 And a last one I still have to read: Hunted by Meagan Spooner

Another retelling of The Beauty and the Beast that got many praises from fellow reviewers.

Beauty knows the Beast’s forest in her bones—and in her blood. Though she grew up with the city’s highest aristocrats, far from her father’s old lodge, she knows that the forest holds secrets and that her father is the only hunter who’s ever come close to discovering them.

So when her father loses his fortune and moves Yeva and her sisters back to the outskirts of town, Yeva is secretly relieved. Out in the wilderness, there’s no pressure to make idle chatter with vapid baronessas…or to submit to marrying a wealthy gentleman. But Yeva’s father’s misfortune may have cost him his mind, and when he goes missing in the woods, Yeva sets her sights on one prey: the creature he’d been obsessively tracking just before his disappearance.

Deaf to her sisters’ protests, Yeva hunts this strange Beast back into his own territory—a cursed valley, a ruined castle, and a world of creatures that Yeva’s only heard about in fairy tales. A world that can bring her ruin or salvation. Who will survive: the Beauty, or the Beast? 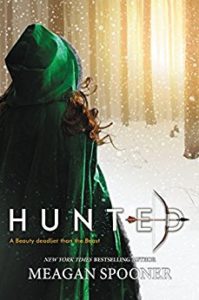 OK your turn: what are your top 5 retellings? Have you read any of these books?